Glasgow City Council has today approved an award of up to £10 million funding from the Glasgow City Region City Deal funding to Transport Scotland for the planned refurbishment of High Street train station. 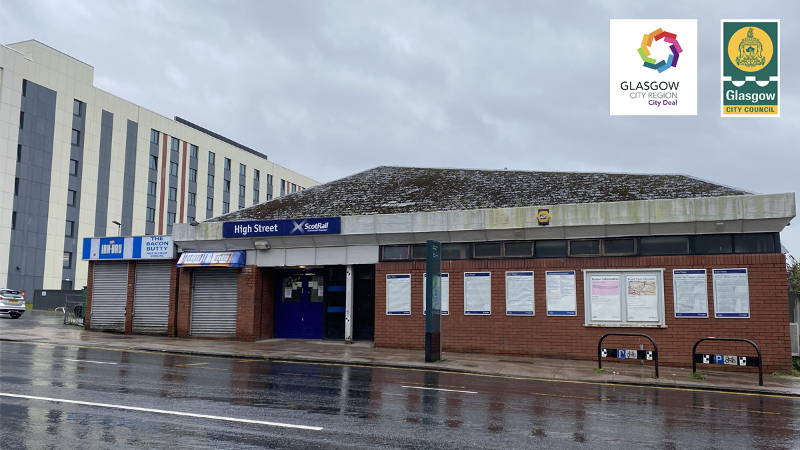 The funding, part of £27m committed to the Collegelands, Calton Barras City Deal project, will be used to meet the cost of professional, technical and construction fees to deliver a revamped station by 2025.

Built in 1866, High Street station was originally known as College until 1914. It has two platforms servicing the North Clyde line; linking to Helensburgh in the west and as far as Edinburgh in the east. A new build, fully accessible, modern station is expected to improve connectivity and promote inclusive economic growth in the surrounding area.

The council appointed consultants in 2017 to support the initial development and design phases of the station, with input from key stakeholders including Transport Scotland, Network Rail and the Office for Road & Rail. Good progress has been made and a partnership working group has been established to plan the delivery of the station involving the council, Transport Scotland and Network Rail.

Cllr Susan Aitken, Glasgow City Council leader and chair of the City Deal Cabinet, said: “We want to see High Street station transformed into an accessible transport hub that will not only improve connectivity for people living, working and visiting the local community; but enhance the overall attractiveness of the area.

“City Deal investment has already delivered significant positive change in and around this area - including the Barras Public Realm improvements and work to increase the development potential of the former Meat Market site.”

Collegelands Calton Barras (CCB) is one of five major infrastructure projects being delivered across Glasgow through the City Deal. Despite being superbly located, immediately to the east of the city centre, the area has various social, economic and environmental challenges, with connectivity in particular acting as a barrier to movement for road users, pedestrians, cyclists and commuters.

The CCB project is striving to unlock development potential in the area, attract and enable the take up of high quality jobs in growth sectors, create a better connected place and facilitate the continuation of economic activity from the city centre to the inner East End and through this, support an attractive living and working environment and enhance resilience.

Including the redevelopment of High Street station, City Deal funding for the CCB project will also support the delivery of a new footbridge over High Street station, land remediation and infrastructure installation at Collegelands and on the former Meat Market site, as well as improvements to the Barras Public Realm and junction improvements as part of the Calton Barras Action Plan.