Scotland’s minister for business, fair work and skills, Jamie Hepburn MSP, has welcomed the addition of new 100% electric vans to the CMS Window Systems vehicle fleet, along with its investment in its electric vehicle infrastructure. 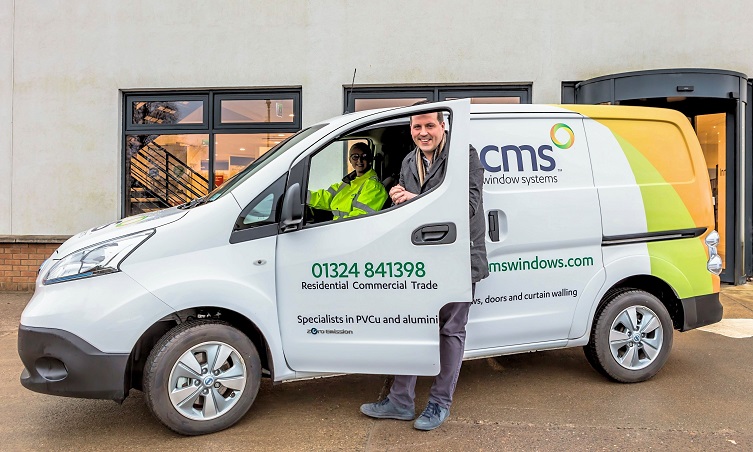 The company has taken delivery of a fully branded Nissan e-NV200 van, following the successful trial of its first electric vehicle over the last 18 months.

With a range of up to 187 miles on a single charge, these vans are ideal for serving CMS customers in the areas within close proximity to its main Castlecary factory and HQ near Glasgow, giving ample scope for emissions-free site deliveries throughout the working day.

In addition to the vans currently in service, CMS is looking at how longer range and larger vans could be added to its fleet as the technology rapidly evolves.

CMS has also added further plug-in charging points at Castlecary, bringing the total to four, with charging facilities also soon to be installed at its East Kilbride and Kirkcaldy sites. This charging infrastructure will also support the growing numbers of visitors to its sites who travel using electric vehicles.

Speaking on a recent visit, Jamie Hepburn MSP, who is also the local member of parliament for Cumbernauld, said: “It’s great to see CMS Window Systems continuing to grow and invest locally, including in this fleet of electric vehicles.  This will let them significantly cut their transport-related carbon emissions.

“It is a welcome example of a local company looking to the future and being pro-active in transitioning towards a carbon-neutral society. I would hope other local companies would recognise the advantages of moving to electric vehicles for commercial purposes and that they look to follow CMS’s lead.”

Barratt David Wilson Homes hosted an interactive site safety discussion with Paradykes Primary School in Loanhead last week to remind youngsters of the dangers of its nearby building sites at Mayburn Walk and St Clair Mews.

The housebuilder hosted a site safety session during a whole school assembly on Friday 24 January with the pupils.

The session took the young people through the dangers of construction sites, the developments themselves, site worker safety and ways to stay safe in the proximity of the building sites.

The Site Safety Roadshow has seen Barratt Homes construction site experts deliver a 40-minute interactive presentation that includes a video, question and answer session, kids sized personal protection equipment (PPE) for the children to try on as well as an information pack for school staff to distribute to pupils and parents as they see fit.

This school visit forms part of a series of site safety workshops that take place in the areas that Barratt and David Wilson Homes are building.

Scotland’s coastal towns such as Arbroath, Montrose and St Andrews are under threat from rising sea levels, according to leading researcher Professor Jim Hansom.

The professor has led research on the Dynamic Coast Project, a study that three years ago predicted more than 20% of the coast was at risk of erosion through rising sea levels. It highlighted that a significant number of properties, parts of the Edinburgh to Aberdeen to railway line, and a number of golf courses were particularly vulnerable.

He has urged policymakers to think seriously about the hundreds of small towns along the coast.

Professor Hansom told The Courier: “There is an immediate problem that needs to be addressed now. Think about what is going to happen to your coastline.

He added: “Are we dealing with the issue properly? The bottom line is no.

“The Dynamic Coast has demonstrated the recent period has seen an almost 40% increase in the extent of erosion and a doubling of the rate of erosion. Things are speeding up.”

Arguing that ongoing cuts to carbon emissions would not deliver results quickly enough to deal with the oncoming effects of coastal erosion, Professor Hansom said: “The key thing is you hear a lot of things about climate change and reducing carbon emissions to tackle temperature increases and that is not going to help us for another 30 years.

“We have an adaptational problem now that needs to be addressed before any of these carbon emission stabilisations or reductions actually produce any effect.”

Midlothian Council has announced two building projects have been approved as part of the Penicuik Heritage Regeneration Project.

Funding of £44,780 has been awarded for No 10 The Square, a traditional stone cottage dating from the mid 19th century. The work will involve re-covering the roof in natural slate to match the original, along with repairs and repointing to the stonework. A boundary wall will also be rebuilt and railings attached at the front of the building.

£14,284 in funding has also been approved for Nos 4-6 Bridge Street, a two storey traditional building dating from the late 19th century. The timber windows at the front of the building are in poor condition and will be replaced with new timber sash and case windows and a new, more traditional, front door.

The grants awarded are for 75% of the total eligible cost. Work on both projects is expected to begin within the next few weeks.

Improvements to the popular Formartine and Buchan Way are to begin next week.

The 40-mile route running from Dyce to Fraserburgh - featuring a 13-mile spur from Maud to Peterhead - follows the routes of the former rail line.

A haven for walkers and cyclists, the Formartine and Buchan Way passes close to a host of popular attractions along its route including Aden Country Park, Deer Abbey, Drinnie’s Wood Observatory and several historic stone circles.

Aberdeenshire Council will be undertaking an improvement programme starting on February 3 which will involve dismantling and rebuilding two structures along the route to safeguard the integrity of the route for years to come.

A section of the route at the South Ugie Water near Maud will be temporarily closed to enable works to proceed safely, with completion expected by mid-April.

During construction, machinery will be working at various locations between the access points near the sewage works at Maud and Abbey Bridge at Old Deer.

Work is nearing completion on major new berthing facilities, capable of handling some of the world’s largest and most luxurious cruise liners at Greenock’s thriving cruise ship market.

A 200m floating pontoon is being built which will be able to accommodate super ships up to 340m long.

The £19.2 million project, led by Inverclyde Council, is part of the £1 billion, Glasgow City Region City Deal which is funded equally by the Scottish and UK governments.

The pontoon is made up of four, 1,000 tonne, concrete caissons - each the size of a small ship. The caissons are currently under construction at the massive Inchgreen dry dock in Greenock and work on them is expected to be finished in February. Once complete they will be towed out of the dock and secured to piles driven into the seabed.

The scheme for buildings in the Inverkeithing High Street area will help private owners to repair or improve their properties.

Grants can support sensitive repairs to historic buildings using traditional materials and skills, as well as the reinstatement of appropriate architectural details such as improvements to historic shop fronts.

Owners can also get advice on how to look after their historic property and improve energy efficiency.

The event on 3 February will be for property owners and occupiers in the High Street area of Inverkeithing. Come along to learn more about the grant scheme and the rights and responsibilities of property owners and landlords. There will also be the opportunity to discuss your project with a member of the team.

East Renfrewshire Council has announced that road improvement works on Ayr Road in Newton Mearns will get underway on Friday 07 February.

The works, which will take place between Malletsheugh Roundabout and Mearns Cross, will improve accessibility at bus stops for those with mobility issues and will provide pedestrians with a safer crossing point. The resurfacing will also improve the condition of the road for users.

There will be preparatory works on Saturday 1 and Sunday 2 February, before they get underway on Friday 7 February. The upgrades are expected to take three weeks to complete and temporary traffic lights will be in place for the duration of the improvements.