FM Group has started to build its 40,364 sq ft supermarket on the Ury Estate site, just outside Stonehaven.

Located at the south-western corner of the Ury Estate, the site of the future supermarket lies adjacent to the A90 Aberdeen to Dundee road, and the Slug Road, to the north of the seaside town.

Developers were granted planning permission in principle at an earlier stage for the supermarket and its associated infrastructure, and were presented with a list of conditions to be met before the project could move forward.

FM Developments has been given the go-ahead by Aberdeenshire Council after successfully meeting the requirements.

Jonathon Milne, director of FM Group, said he was delighted work was now getting underway on the new supermarket site.

Mr Milne said: “This clears all the planning conditions on the retail consent that we had previously, and what this means is it allows us to start work on the site, and we started on Friday.

“It’s all good news, and there’s lots of really positive things happening around Ury, so we’re feeling really pleased with how everything is progressing right now.

“We’ve been working away on a lot in the background.

“The supermarket could be ready towards the end of next year.”

High-tech, Scottish-based site security company Safer Scotland has broken into the lucrative UK market with a £500,000 contract at the Northumberland Energy Park.

The breakthrough deal, signed with UK and Europe building and civil engineering contractor Farrans, is the latest in a successful run of contract wins which will push Safer Scotland’s turnover to in excess of £1.6 million, up by 50% on this year.

The Northumberland contract, which will run for two and a half years, will entail a bespoke CCTV package, man-guarding and access control at the strategic land development sites across the Blyth Estuary.

It follows a previous contract win with Farrans for a road realignment project in Aberdeenshire. That, in turn, followed a major £200,000 instruction at the £38 million Farrans Roadbridge Joint Venture which was set up to construct the A737 Dalry bypass.

Safer Scotland, which employs 12 people, has recently moved into new offices which will also serve as a security demonstration centre, illustrating how radically site safety and surveillance has changed in recent years.

Schools across Dundee are set for a facelift this summer if councillors back more than £400,000 of investment.

The city development committee is to be asked to approve £440,890 of work at six city schools with the tenders submitted by Dundee City Council’s construction services division.

Work will include an upgrade of the infant toilets at St Pius PS, conversion of a biology lab to a computer suite and replacement of lighting at Craigie HS, replacement of fire doors at Ardler and Craigiebarns primary schools, refurbishment of the caretaker’s office at Dens Road and new roof coverings at SS Peter and Paul.

All of the work is expected to take place during the school summer holidays and be completed by August.

The city development committee meets on May 13.

The Scottish division of Lovell Homes has scored gold for a second consecutive year in an independent customer satisfaction survey of new homebuyers.

Customers who bought a home from Lovell during 2018 were asked a series of questions, including whether they would recommend the company based on the overall experience of buying their home. 95% of customers completing the survey said they would, reconfirming the company as an industry leader in customer satisfaction.

A derelict former commercial site in Edinburgh has made way for a brand new Hillcrest development, injecting 59 affordable homes to the capital’s housing provision.

The new development, which is spread across three blocks of flats at Loaning Road, was completed this month and offers 48 homes for social rent, and 11 for mid-market rent under Hillcrest’s newly launched company, Hillcrest Enterprises. 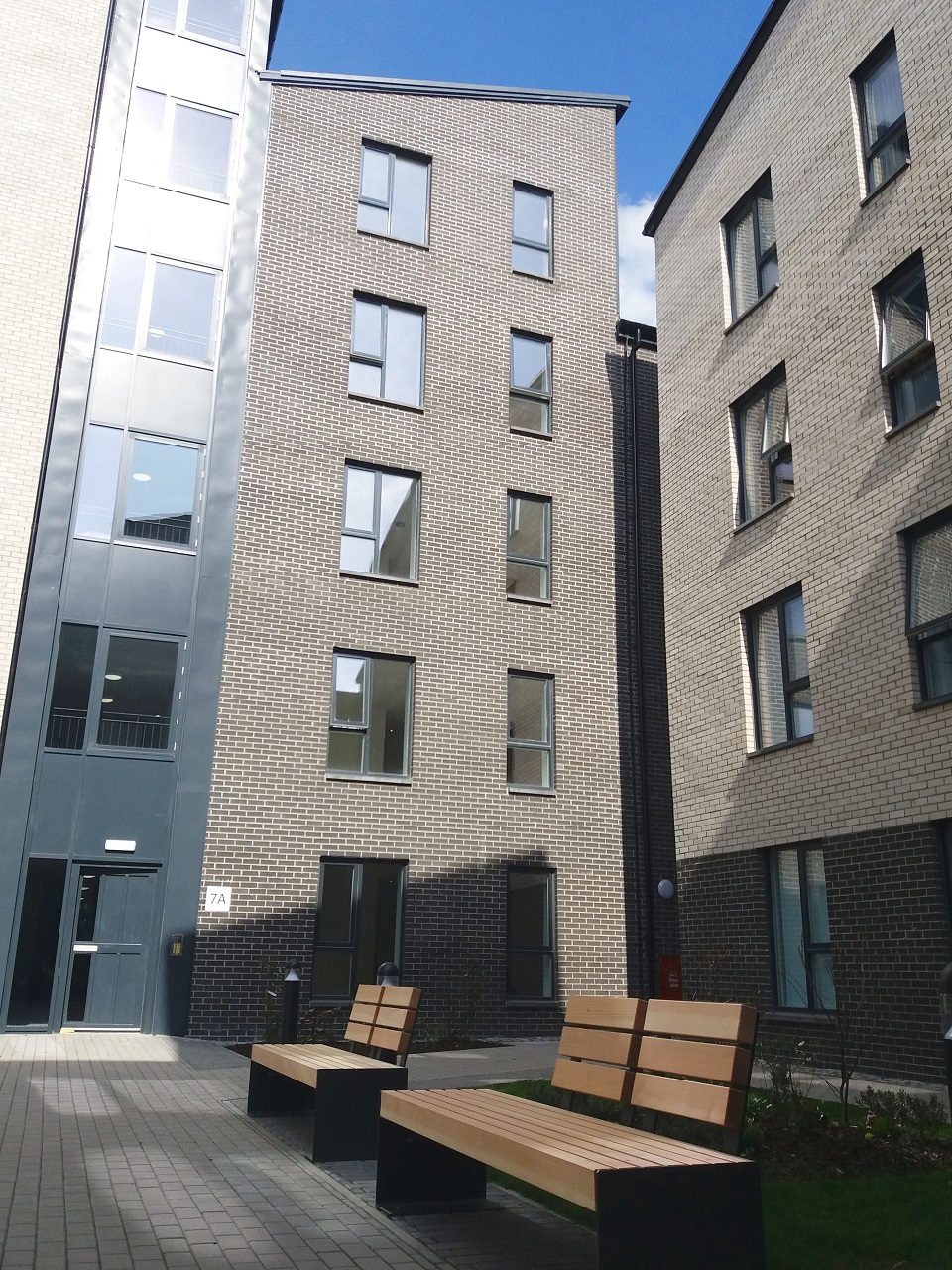 The flats have been developed with range of layouts, with one, two and three bedroom properties available. The homes also come with the latest energy efficiency measures in order to help tenants keep their bills as low as possible.

Every flat has been fitted with an internal ventilation system with heat recovery, which greatly reduces heat loss from the building, and also helps create a healthier living environment for the occupants.

Situated on the site of a former day centre, the development sits between a neighbouring modern housing development and the iconic Craigentinny House, which was built in 1604.

The Loaning Road development has been designed to sit back from the road, so as not to overshadow Craigentinny House, allowing the historical building to retain its prominence on the street.

The new homes have also already won their first accolade, being granted a Secured by Design (SBD) Silver Award by Police Scotland.

Pupils at West Primary School in Paisley learned about health and safety on live building sites, with a competitive twist.

Construction, refurbishment and maintenance contractor Clark Contracts is delivering a £2.5 million refurbishment of the roof and replacement of windows within West Primary school for Renfrewshire Council, scheduled for completion in Summer 2019.

The contractor’s health, safety, environment and quality manager Gordon MacKenzie visited the school along with the site manager to deliver a presentation highlighting the dangers on a construction site. The children were then asked to design posters to alert others of the dangers they had learned about.

17 class winners from the school were each presented with an Intu Breahead gift voucher.

In addition, the overall best design from the school, submitted by Amy Sheppard, P6, has been professionally printed for display around the site hoarding. The school and nursey also received a cheque for their participation which they can use towards new resources for the school.

A Dundee City Council development plan designed to take advantage of offshore wind and decommissioning opportunities aims to bring more jobs and investment to the city.

Councillors will be told next week that plans are in place to ensure that Dundee capitalises on its work so far in the sector, including the establishment of Dundeecom, membership of the Forth and Tay Offshore Cluster and money set aside in the Tay Cities Deal.

According to the report, to be considered by the city development committee on May 13, Dundee’s geographical location in close proximity to major North Sea oil and gas fields and offshore wind farms, its unrestricted access to deep water port facilities, port side land assets and access to skilled labour provides a major platform to realise opportunities that will emerge in both sectors in the coming years.

In addition the Scottish Government’s National Renewables Infrastructure Plan recognised Dundee as one of the most strategically important port locations for offshore renewables.

The proximity of windfarms that have already been given the go ahead such as Neart na Gaoithe (NNG), Seagreen and Inchcape to the Port of Dundee means it is an ideal location for construction/assembly of turbines and longer term operations and maintenance work.

Actions in the development plan include a commitment to attracting inward investment; developing supply chain capability; investing in skills development and research and development; and continuing to build effective public/private partnerships that support the growth of both sectors.

Reflecting local demand, the 25-unit development at Glebe Place is a good mix of housing types and flats suitable for individuals and families on what was previously a green field site on the southern edge of the village.

Berwickshire Housing Association (BHA) has worked in partnership with Scottish Borders Council (SBC) and the Scottish Government with BHA and the government providing the funding to develop the homes.

As with all of BHA’s new-build homes they are of a very high standard when it comes to energy efficiency.

This new development, built by Hart Builders, is part of a larger 1.4-hectare zone identified in SBC’s local development plan as a proposed housing site. The architect was Smith Scott Mullan Associates.

BHA owns the site which has been divided into two development areas. The larger part of the development has a series of semi-detached two, three and four-bedroom homes facing north and south, all looking onto the main street and each having private front and rear gardens and parking spaces between them.

Within a courtyard space on the larger development there are one and two-bed cottage flats plus a three-bedroom wheelchair accessible home at ground-floor level with its own dedicated parking space. Each flat has its own front door.

In the smaller development area there are two semi-detached three-bedroom family homes to the south side of Erskine Place.

In total there are 42 car parking spaces within the development.

Two drop-in events being held in Birnam later this month will provide local communities and road users with an update on the design process for the section of the A9 to be dualled between Pass of Birnam and Tay Crossing.

Following community engagement events held at the end of March, a number of whole route options have been developed which will now be assessed alongside the community preferred route option.

The community engagement events will take place on Thursday 16 and Friday 17 May 2019 from 11 am – 9 pm at Birnam Arts and Conference Centre.