Mactaggart & Mickel’s Building Communities Fund has contributed £750 to the North Section of Stingrays Swimming Club based in Kilmarnock and surrounding areas to help support young swimmers at the club to compete at the highest level. 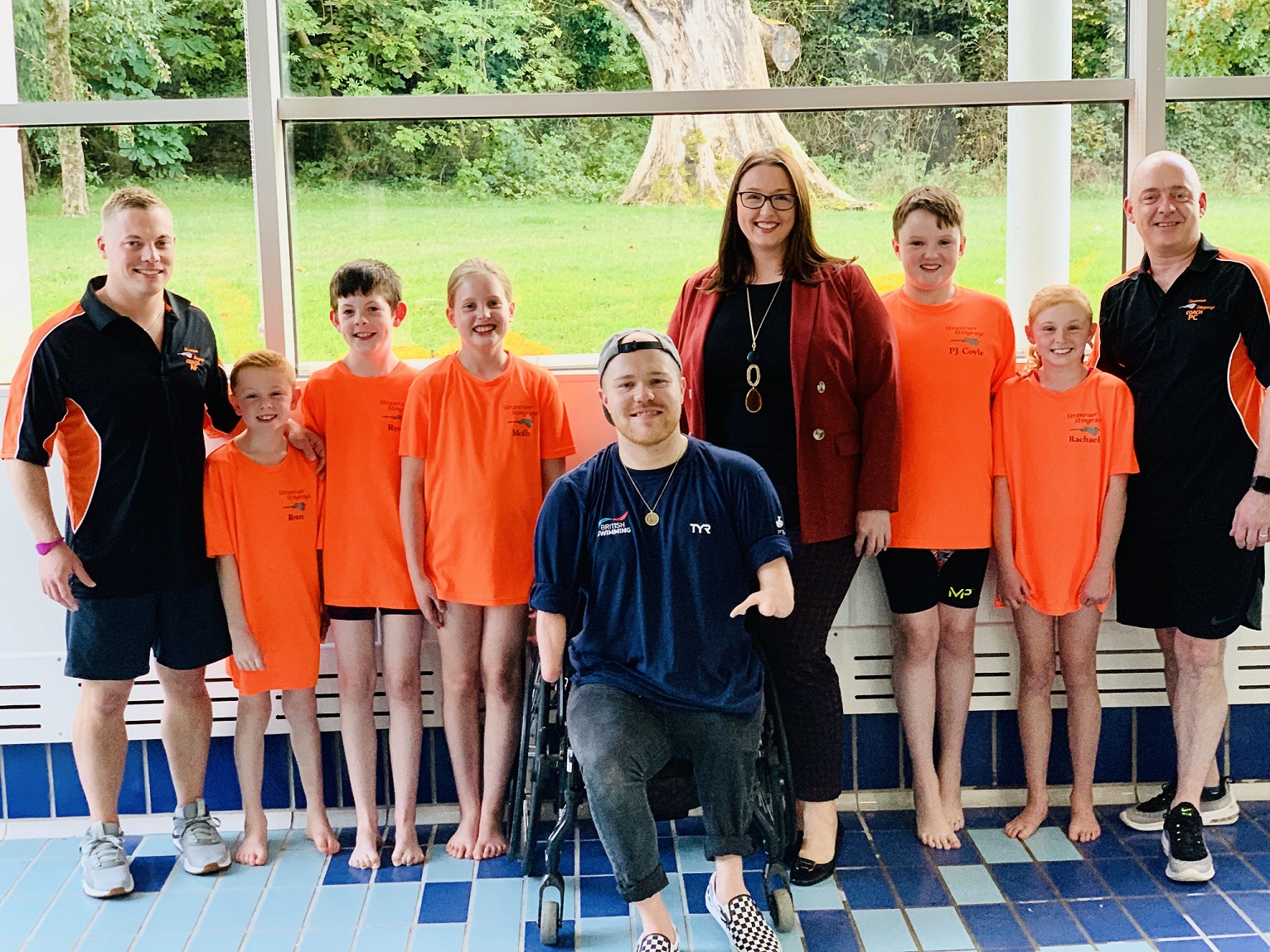 The swimming club supports children from a variety of backgrounds in the community and aims to promote swimming as an inclusive, barrier-free sport.

There are currently no 50m pools in Ayrshire for the club to train at, putting the Stingray swimmers at a disadvantage as larger pools allow the children to gain stamina and the valuable experience of training in a 50m competition-sized pool.

The money will support access of 15 swimmers at a time to a 50m pool.

Mactaggart & Mickel has been sponsoring Paralympian swimmer Andrew Mullen since 2016 and previously sponsored a young Ayrshire swimmer, Jordan Hughes, from 2012 to 2014.

Andrew competed in the 2012 and 2016 Summer Paralympics and won a silver and two bronze medals at the 2016 Paralympics in Rio. He recently visited a Stingrays Swimming Club training session to see the young swimmers in action and was able to offer advice to the children he met as well as hearing how moving one training session to a 50m pool once a week will make a real difference to everyone at the club.

Plans have been lodged for a new car park with more than 460 spaces near Aberdeen International Airport.

The planning application has been submitted to Aberdeen City Council by Halliday Fraser Munro on behalf of GSS Developments (Aberdeen) Ltd for vacant plots within the ABZ Business Park in Dyce.

If the proposals are approved, a long-stay car park with 462 spaces would be built, which would be a walk of around 500m from the airport terminal building.

Ashwood Scotland has announced plans to move to larger headquarters.

The business is moving less than a mile from its Bathgate premises to 3,000 square foot offices at Tailend Court in Livingston.

The company has grown to employ more than 70 staff and this year celebrated its 20th anniversary.

Plans to revamp the Bridge of Tilt Hotel have been approved by Perth and Kinross Council.

Plans were lodged in June 2018 to renovate the building, including some demolition work.

The works will also include external alterations and the construction of five new holiday cottages in the grounds.

Plans to upgrade a fire training centre have been approved.

The Scottish Fire and Rescue Service (SFRS) had applied to Aberdeenshire Council to construct three new training buildings at its facility near Portlethen.

Set to take about two years to complete, the £4 million upgrade will let firefighters train in realistic scenarios including working at height.

A £3 million project has been unveiled to transform Kirkcaldy’s Adam Smith Theatre into a creative hub.

Under the plans, the building will be redesigned to introduce new performance, work and creative spaces that will change it from a traditional civic theatre to a modern multi-purpose facility.

The main theatre will be given a complete makeover, and new smaller performance areas created downstairs - with the lower function hall and the Beveridge Suite both totally transformed.

The work is being led by Fife Council and Fife Cultural Trust, which manages theatres, galleries and museums across the region.

Perth and Kinross Council is to carry out essential resurfacing works on a section of the A93 Glasgow Road in Perth from this weekend.

The works will be carried out at the Glasgow Road roundabout at Lamberkine Drive/Broxden Avenue (leading to Broxden services) and on the carriageway heading west towards Broxden Roundabout.

Weather permitting, this is scheduled to last for five nights, with temporary traffic lights in operation nightly between 9.00 pm and 6.00am, to ensure that traffic can still access Broxden Services and Glasgow Road.