Support for the long-running campaign by electrotechnical trade association SELECT for recognition of electricians as a profession is literally building brick by brick across the construction industry and beyond.

SELECT, whose campaign is also backed by the Scottish Joint Industry Board (SJIB) and Unite the Union, has launched a Wall of Support, a striking graphic representation of the ever-growing numbers of organisations and individuals who are throwing their weight behind this vital issue. 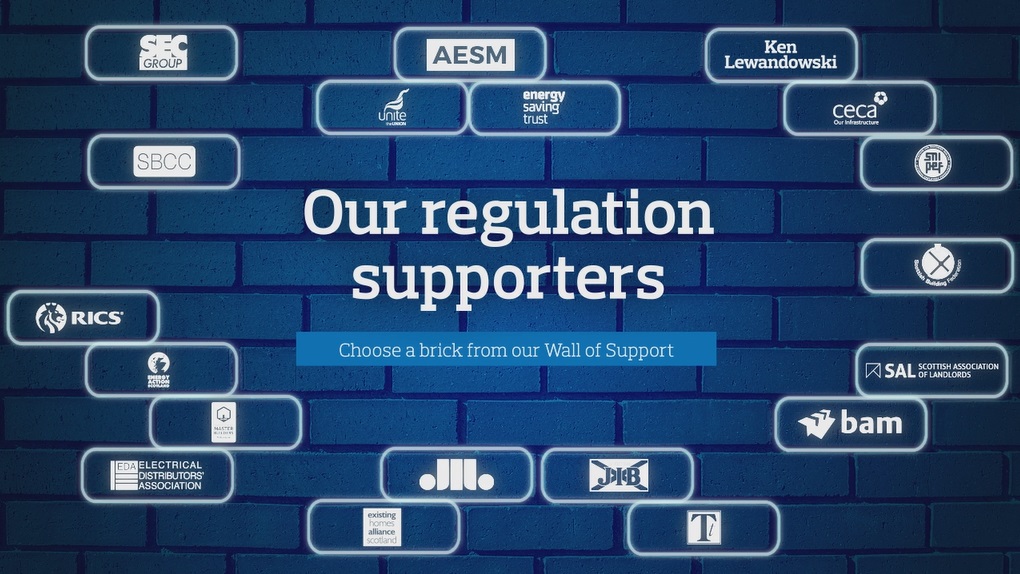 The Wall illustrates vividly the strength of feeling across a huge range of disciplines that being an electrician is a highly-skilled and professional occupation and that those who practise it must be suitably qualified.

Surveyors, housebuilders, professional bodies and trade unions have all lined up behind SELECT’s stated position that Recognition of Electricians is an issue of public safety and that the profession should be protected by the full weight of the law.

Bodies which have contributed a brick in the Wall include: the Royal Institution of Chartered Surveyors (RICS); the Scottish Association of Landlords; the Specialist Engineering Contractors’ Group; the Association of Electrical Safety Managers; Energy Action Scotland; BAM Construction; the Scottish Building Federation; the Federation of Master Builders; and the Energy Saving Trust.

As an example of the commitment that organisations have made to the Wall, Gail Hunter, of RICS, said: “The RICS supports the campaign to introduce Protection of Title, which would ensure that anyone calling themselves an electrician in Scotland would have to hold appropriate qualifications.”

Bruce Dickson, regional director – Scotland for BAM Construction, said: “BAM supports the importance of using professionals in all aspects of construction. It is vital that we ensure only properly trained and qualified people carry out these works.”

John Blackwood, CEO of the Scottish Association of Landlords, said: “We support the importance of using professional electricians in all types of construction work, be they multi-million pound contracts or small domestic works.”

Alan Wilson, acting managing director at SELECT, added: “The Wall shows in a dramatic fashion the strength of feeling that exists within the construction sector about the issue of professional recognition.

“The issue has been raised and debated in the Scottish Parliament and this week Jamie Hepburn, the Scottish Minister for Business, Fair Work and Skills, will be hosting a Working Group to consider how  a legal requirement for electricians to be regulated could be introduced.

“We would like to thank the very significant and influential number of organisations which have given time and support to this vital campaign and we can assure them that SELECT will continue to press the issue towards a satisfactory conclusion.”