SSE Thermal and Equinor have unveiled plans to jointly develop a new low-carbon power station at Peterhead, which could become one of the UK’s first power stations equipped with carbon capture technology. 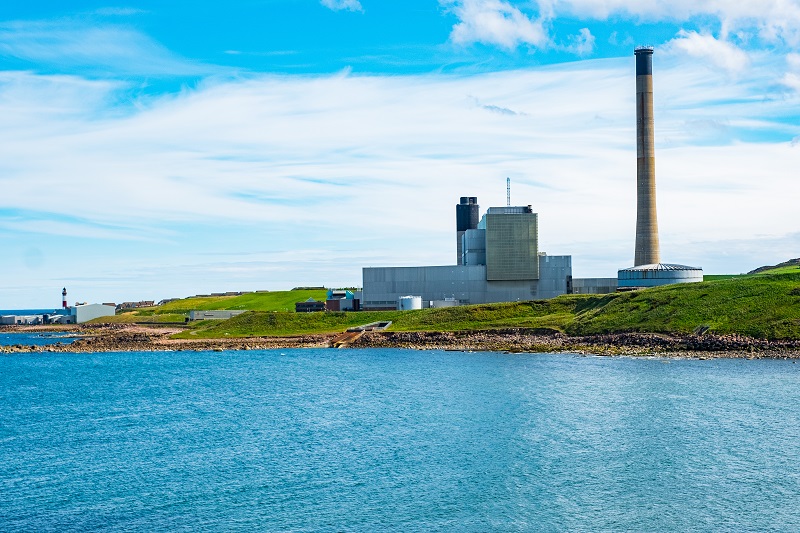 Peterhead CCS Power Station is planned to be a new 900MW gas-fired power station fitted with carbon capture technology to remove carbon dioxide (CO2) from its emissions. By capturing up to 1.5 million tonnes (MT) of CO2 each year, the new station alone would achieve 15% of the UK Government’s target to capture 10MT of CO2 annually by 2030.

Situated on Scotland’s east coast, the Peterhead site is ideally placed for carbon capture technology, with access to essential CO2 transport and storage infrastructure being developed through the well-advanced Acorn Project. The Acorn CO2 Storage Site, which will be used by the Acorn Project to safely store CO2, is located about 100km offshore in rock formations deep below the North Sea. Peterhead CCS Power Station and the Acorn Project both won funding from the UK Government’s £171 million pot for the Industrial Decarbonisation Challenge Fund in March, as part of Scotland’s Net Zero Infrastructure programme.

Given the readiness of carbon capture technology in power generation, projects like Peterhead CCS Power Station would stimulate the development of CO2 transport and storage infrastructure across Scotland, into which other energy and industrial emitters can then connect to capture and store their emissions. This will accelerate Scotland’s transition to a net zero economy, while safeguarding vital Scottish industries and ensuring a just transition for workers and communities.

The Peterhead CCS Power Station project is in the development stage and final investment decisions will depend on the progress of the necessary business models and associated infrastructure. With the appropriate policy mechanisms in place, the new station could come online by 2026, in line with government ambitions for ‘Track 1’ industrial cluster projects and the proposed timelines for the Acorn Project.

The agreement follows the announcement in April that SSE Thermal and Equinor are co-developing two low-carbon power stations in Keadby, North Lincolnshire. These announcements reflect the longstanding partnership between Equinor and SSE in the UK, which includes the joint venture to build Dogger Bank Offshore Wind Farm, the world’s largest offshore wind farm.

Energy Minister and the UK’s International Champion on Adaptation and Resilience for COP26, Anne-Marie Trevelyan, said: “Carbon capture storage technology is one of the most exciting and innovative ways that we’re looking to tackle climate change, and today’s announcement marks a significant step towards a greener, more sustainable future for Scotland and the whole UK. Once up and running, CO2 emissions saved through this station alone will be the equivalent of taking 60 million cars off the road every year. Developing and applying this technology in Scotland will be a key element in the energy transition whilst creating a skills base and jobs on the ground that will endure and grow for decades to come. The UK Government has set out plans to work hand in hand with industrial areas and businesses to ensure they have the skills needed to lead the way.”

UK Government minister for Scotland David Duguid said: “Thanks to the UK Government’s £31m investment into Scotland through the Industrial Decarbonisation Challenge Fund, we’re enabling crucial projects like this one at Peterhead to play a huge part in our path to net zero. We are delighted to see this project move forward along with the Acorn CCS Project at St Fergus, which will connect industrial sites across East Scotland with access to world-class, safe carbon storage resources in rock deep below the North Sea. The work done here by SSE Thermal and Equinor underpins the UK Government’s vision for sustaining industry, safeguarding jobs, and building back greener.”

Scottish Enterprise interim chief executive Linda Hanna said: “In line with our ambitious climate change targets, Scotland is leading the way on a just energy transition. Supported by key Scottish Enterprise and Scottish Government policies, the Peterhead CCS Power Station project demonstrates this transition in action. This key energy site in Scotland is utilising the talent and connections within the industry to support wider industrial decarbonisation and will be a key area of discussion at COP26.

“With links to the Acorn CO2 project too this is an example of Scotland leading the way on energy transition as we highlight the expertise and innovation available in the industry in areas such as hydrogen and carbon capture and storage. This collaboration with Equinor will bring a wealth of expertise to progress the project in the north east of Scotland and is welcomed by Scottish Enterprise as we continue to work with companies across the energy supply chain for the benefit of the economy and to ensure a sustainable energy future.”

Stephen Wheeler, managing director of SSE Thermal, said: “We’re delighted to announce this agreement with Equinor today to work together to decarbonise our power generation at Peterhead. Through cutting-edge carbon capture technology, we can decarbonise this vital flexible power generation, as well as heavy industry and other hard-to-reach-sectors of the economy, which will be crucial in Scotland transitioning to a net zero future. Ahead of the critical COP26 conference in Glasgow this year, there is a clear opportunity to demonstrate leadership on CCS, maximising the benefits of a green recovery in industrial regions, and ensuring a just transition for workers and communities.”

Grete Tveit, senior vice president for low carbon solutions at Equinor, added: “We are pleased to be joining SSE Thermal in the development of this world-leading plant at Peterhead. It is another important step in the energy partnership between Equinor and SSE. This power station is a milestone for Scotland’s ambitions to create a decarbonised industrial cluster. Projects such as these are critical for efforts to reach net zero, contributing to the UK’s goals to become a world leader in low carbon, and also helping ensure a just transition for industrial communities.”