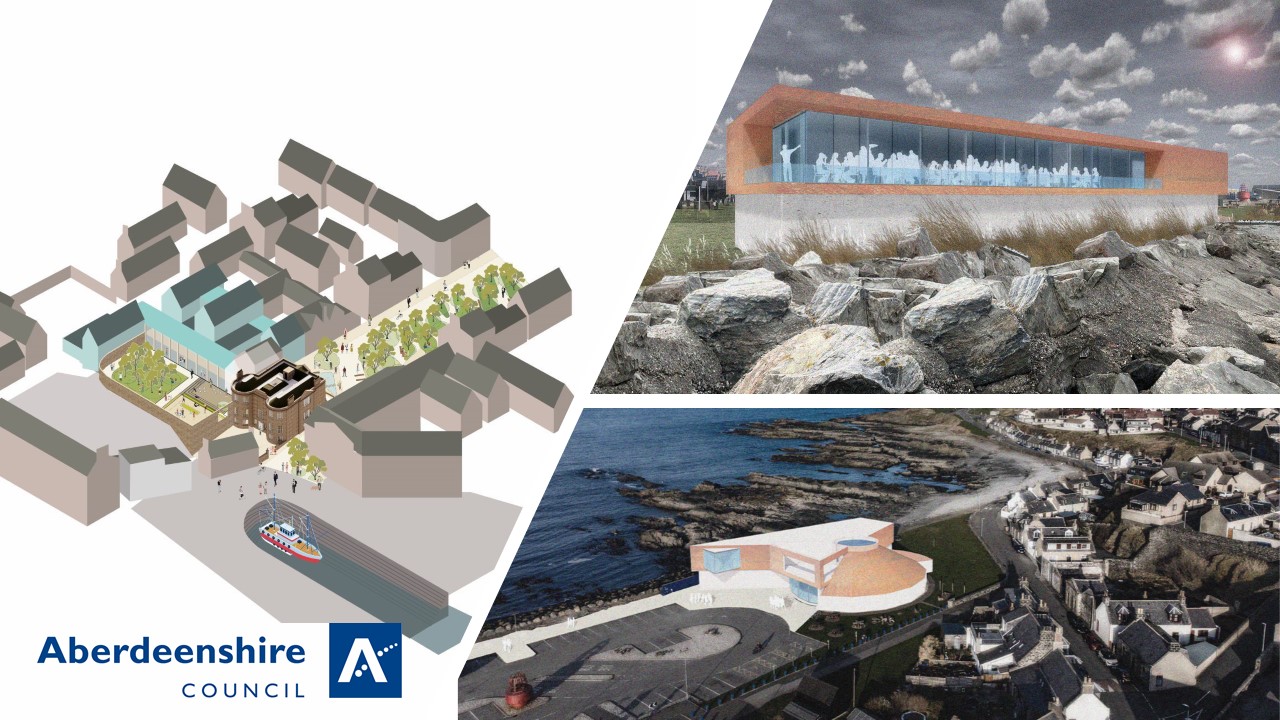 The projects that could benefit from the funding

The renovation and extension of Macduff Marine Aquarium and the development of a cultural quarter in Peterhead are part of a £20 million bid from Aberdeenshire Council to the UK Government’s Levelling Up Fund.

Under the proposed plans, a significant modernisation of the existing aquarium at Macduff would improve the visitor experience and include expanded exhibits and enhanced facilities. A spectacular two-storey extension would take advantage of coastal views and include a new café-restaurant, education suite and community space.

The £5.7m project would also involve an external revamp of the building, a new children’s play area and path links along the coastline.

In Peterhead, £18m would be invested in the creation of a new ‘cultural quarter’.

The project will revitalise the heart of Peterhead by transforming the disused Arbuthnot House into a new destination museum and cultural hub. The historic building would be sensitively restored and a striking new extension would house both the town’s library and a new regional museum showcasing Aberdeenshire’s extensive historical collections and artwork.

Multi-purpose and workshop spaces would support participation and learning, whilst a new dedicated facility would attract temporary national exhibitions. The facility would include a café and restaurant with views of the harbour, and the building’s former walled garden would be transformed into a new public green space.

The existing Arbuthnot Museum and Library building on the town’s St Peter Street would be restored and converted into a new cultural venue with a live entertainment space and dance/music studios on the upper floor.

Following positive feedback from the online public engagement held in May, Aberdeenshire Council has developed the business case for the projects and has submitted the application to the UK Government’s Department of Levelling Up, Housing and Communities.

The Levelling Up Fund operates on a competitive basis, and the bid will now be assessed by the UK Government. A decision is expected later this year.

Councillor Mark Findlater, leader of Aberdeenshire Council, said: “Macduff Marine Aquarium is a cherished visitor attraction and valued natural heritage resource, but its current facilities do not allow its full potential to be realised. The proposed investment will overhaul the look and function of the aquarium whilst maintaining its charm and expanding its important educational role.

“The creation of a cultural quarter around the disused Arbuthnot House will ignite new energy and opportunities in Peterhead’s historic town centre. The new museum and gallery, together with a bespoke library facility and educational facilities, will instill a deeper perception of culture, heritage and sense of place within the town and the wider region.”

David Duguid, MP for Banff and Buchan, added: “The Levelling Up Fund is designed to invest in infrastructure which improves everyday life across the UK. The projects within this bid respond strongly to the ambitions of the fund by proposing significant investment in the cultural infrastructure in two of Banff and Buchan’s coastal towns: Peterhead and Macduff.

“I’ve been delighted to offer my formal support to the bid as part of the application to the UK Government.”