And finally… Peter Pan to live on at Mearnskirk

A beloved bronze statue of one of fiction’s most famous young boys will be reinstated within the grounds of a future housing development. 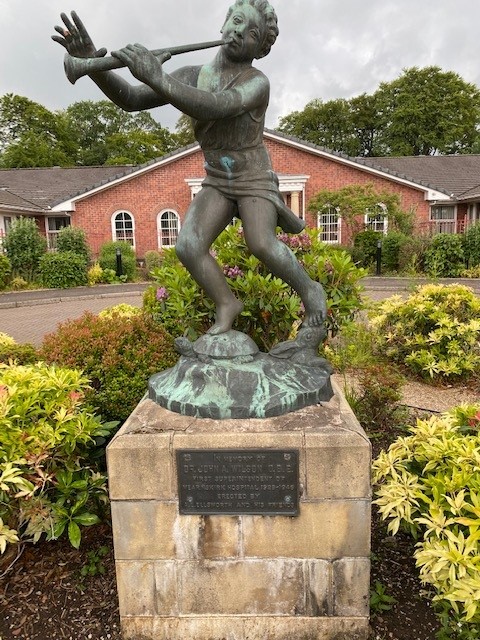 Dundas Estates, which is to redevelop land of the former Mearnskirk House, in Newton Mearns, has temporarily placed a memorial featuring Peter Pan into safe storage during demolition works.

In light of concerns from the community as to the long-term future of the statue – which was created in memory of Dr John A Wilson OBE, the physician superintendent of the former sanatorium from 1929 to 1946 - the developer has pledged to give the statue pride of place again.

The statue was first unveiled to a large crowd three years after Dr Wilson’s death, as a fitting memorial to reflect the stories he told children on the wards. It was created by renowned sculptor Alexander Proudfoot.

Craig Fairfoull, head of sales and marketing with Dundas Estates, said: “We would like to reassure the Newton Mearns community that Peter Pan will live on at this location.

“As soon as work on the site allows for us to replace the statue, without fear of it being damaged in any way, we’ll make sure that no time is wasted.

“We are in the process of finalising plans for the redevelopment of the site and will commence a period of public consultation over the coming weeks.  We are committed to working with the local community and the local authority to agree a final location for Peter Pan within the site.

Peter Pan was the creation of Scottish writer John Matthew (JM) Barrie, who was born in Kirriemuir and schooled in Glasgow, Forfar and Dumfries before moving to London.

The development at the former Mearnskirk Hospital will see the Livingston-based independent developer create a range of apartments. As it is early into the planning process, the developer will be seeking insights and contributions from the community in the coming months, as it shapes its proposals.