Two North East businesses are collaborating to boost the circular economy and divert waste from landfill. 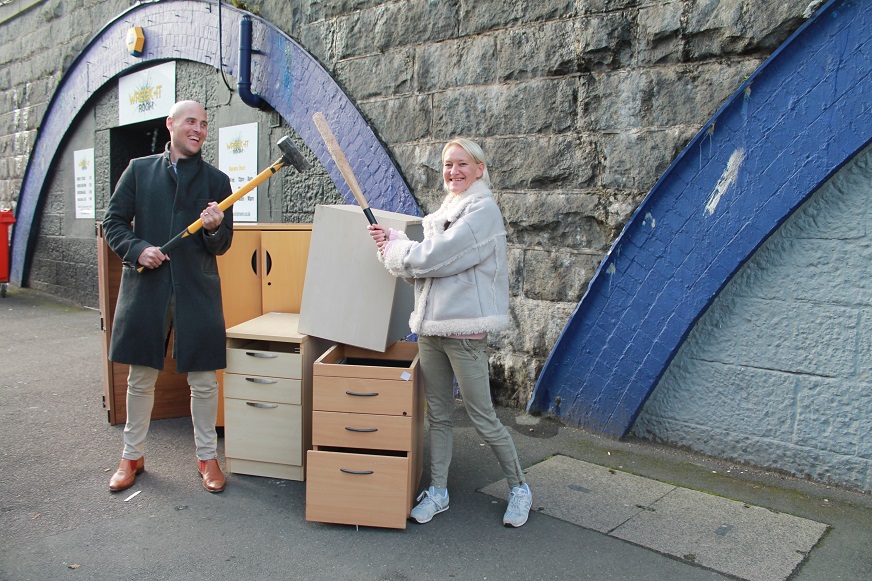 Aberdeen’s Greenwell Equipment is working with the newly launched Wreck It Room to clear out scrapped or damaged used office furniture which has been stored for years rather than being sent to landfill.

Greenwell, which specialises in new and quality used office furniture, as well as cabins, containers, and racking, has operated in the city for 25 years. Over the years, the firm has accumulated tonnes of unusable furniture in the hope of finding a positive solution rather than disposing of it.

Now, the team is liaising with a new business which has been launched in the city’s Palmerston Road as an avenue for the damaged goods. Wreck-It Room was launched after lockdown to combat stress, giving people the opportunity to book in and get rid of pent-up frustrations by smashing things up.

The business is focused on limiting the amount of waste sent to landfill and the team works closely with a number of recycling businesses to ensure that leftover pieces, such as wood, metal, glass, ceramics, and plastics, are given a second life.

Julie Wood, director at Greenwell Equipment, said: “Putting waste to landfill is a pet hate of mine and that’s why we’ve ended up with containers worth of damaged furniture. I’m also hugely passionate about the circular economy so working with the team at Wreck-It Room is a great option.

“Our philosophy as a business is to be as environmentally aware as possible and re-selling quality used furniture is a huge part of supporting the circular economy. We have more than ten 20ft containers full of items that are completely unusable so collaborating with another local business to divert waste to landfill with the knowledge that the items will be recycled afterwards is a win-win solution.”

Rage rooms are popular in America and Wreck-It Room is currently the only similar business north of Glasgow.

Part owner, Craig Finnie, said: “We limit as much as we can from going to landfill and it is our target as a business to reach 90% recycling for items leftover from sessions. We use damaged items from house clearances and office moves, and work with clearance firms to source items that would otherwise be heading to landfill.

“Creating a good working relationship with Greenwell has been great and it is key for us to continue to collaborate with lots of local businesses in the city to source items which can be used during our sessions and then recycled afterwards.”

Greenwell Equipment, which specialises in cabins, containers, warehouse racking and office furniture, launched in 1996 selling second-hand furniture and has since grown to become a multi-million-pound business that has worked on some of the UK’s largest infrastructure projects.

Run by brother and sister team, Mark Turnbull and Julie Wood, alongside their father, Richy, Greenwell, which won the Family Business Award in the latest Northern Star Business Awards, has delivered contracts for a number of large-scale projects, including the Queensferry Crossing, the AWPR, the new Aberdeen Harbour development, the A9 upgrade and the HS2 Rail development in England.