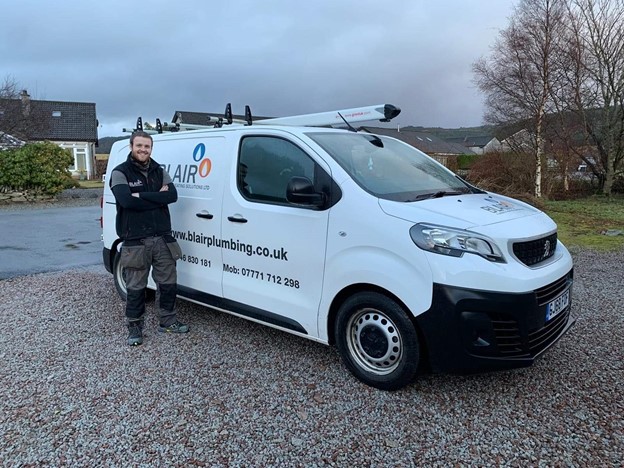 The award recognises an apprentice that has adapted to the challenges of learning during a pandemic and applied the learning to real work situations.

He said: “I am absolutely thrilled to have been given this award and would like to thank everyone at SNIPEF for their support over the years and for nominating me. I could not have asked for more during my apprenticeship. SNIPEF has been really good to me.

“I must also thank my employer, Graeme Blair, and the rest of the team at Blair Plumbing and Heating Solutions who have given me, over the course of my apprenticeship, the opportunity to learn my trade to the highest standards.

“Finally, I’d like to thank Glasgow Clyde College – Cardonald Campus for all their hard work during my apprenticeship and especially continuing the course online throughout lockdown. They really went the extra mile to keep me and my classmates up to speed with everything.”

Graeme said: “Iain has always worked hard, with the aim of being the best at his job. He is a credit to himself, his family and the plumbing trade. As a SNIPEF member for many years, I encourage all plumbing business throughout Scotland to make full use of the STS training package in preparing their apprentices to become first-class trades people.”

As a student at Glasgow Clyde College Iain won the college nominated Apprentice of the Year Award supported by SNIPEF, additionally was nominated for the Hammerman Award. This award goes to a young engineer who has led a project which benefited both his company and the industry.

Like many other apprentices, Iain adapted to working effectively and efficiently during the pandemic, he excelled in his accomplishment, not only in achieving his Modern Apprenticeship qualification in Domestic Plumbing and Heating, but also in sharing and helping others to do the same by offering advice and support.

Dale Thomson, apprentice training manager at SNIPEF, said: “Iain is passionate about what he does and is willing to help the industry in any way he can and we at SNIPEF are quite delighted that his many qualities have been recognised by the BPEC judges.”

Fiona Hodgson, chief executive of SNIPEF, said: “Iain is a true role model for the increasing numbers of people who value the opportunity that a plumbing apprenticeship provides and we are pleased that he has been named Best Plumbing Apprentice by BPEC.”

STS and Scotland’s College Task Group also picked up a highly commended award for the Best Use of Plumbing Technology for the work that was undertaken to create new online assessments to ensure over 850 apprentices were able to remain on track with their Modern Apprenticeship during the global pandemic.