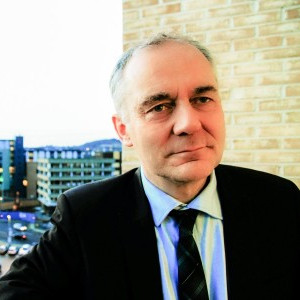 Scottish Housing News Podcast co-host Jimmy Black outlines the roundtable discussion from the first episode of the podcast, which has been launched to kick off our series on how Scotland’s social housing sector is meeting the net zero challenge.

Some intriguing possibilities were thrown up in a four-way conversation with Teresa Bray from the Existing Homes Alliance, David Bookbinder, Scottish Housing News editor Kieran Findlay and myself.

Sparked by COP26, the discussion unearthed worst-case scenarios which will challenge housing providers, tenants and owner-occupiers in the years to come.

The Existing Homes Alliance (EHA) has some answers. They sent out a radical manifesto before the last Scottish Parliament election. In short, it called for money, innovation, and regulation to make zero carbon happen.

I asked Teresa Bray if the politicians had responded … and she said yes, they had. The Scottish Government’s new Heat in Buildings Strategy with £1.8 billion attached has all three elements. She said: “We need to ensure a Just Transition so that all sectors can make the change at an affordable cost.”

We started with money. £1.8 billion over five years is not enough. Teresa said we need to work with other players in the market, attract private finance, and help utilities such as energy companies find ways of meeting their obligations. The total cost must not fall on the shoulders of landlords.

Kieran asked if the Government’s target for retrofitting a million homes with zero carbon heating by 2030 is practical. Teresa said doing that means converting 200,000 homes every year at the end of the decade. That’s a real challenge, because before the pandemic we only managed 3,000 air source heat pump installs a year. She still thinks it can be done.

That raised concerns with David Bookbinder, from the Glasgow & West of Scotland Forum of Housing Associations. I asked him if the huge investments required to bring housing association stock up to standard could threaten the viability of smaller landlords.

He said housing associations will not take the risk of financing all of this by borrowing against the rents. In this climate, the big rent rises required would be unacceptable. Investment on this scale requires government support, but he is nervously confident that will come.

What about innovation? David cited Southside Housing Association’s pilot project to bring a traditional tenement up to Passivhaus standard. Teresa talked about heat pumps, and using batteries to store energy from solar panels. Maybe they could be used to store cheaper electricity generated at night.

And then she mentioned storage heaters, possibly the most unpopular form of central heating ever invented. She said Glasgow Housing Association is looking at adapting storage heaters to make them more controllable. New designs retain heat more effectively, and cheap night-time tariffs could bring down the costs significantly.

On the day we met, journalist Lesley Riddoch rummled things up with a piece in The National, arguing that putting heat pumps in individual homes was generally the wrong way to go. Let’s follow the Scandinavian example, she said, where district heating schemes are normal.

“There’s definitely a role for district heating,” said Teresa. “Shetland do this in Lerwick, and on a smaller scale there are trials of ground source district heating schemes in four in a block housing.”

David said district heating schemes will generally require buy-in from owners and private landlords, and that’s often hard to achieve. That brought us to the Existing Homes Alliance’s third requirement … regulation. Teresa said we may need changes to the Tenement Act to ensure that private tenants, for example, are empowered to take advantage of more efficient heating. Otherwise, some private landlords might simply leave them with expensive electric heaters when their gas boiler goes.

More generally, we agreed we needed regulation of all sectors to ensure the Government targets are met. What would make owner-occupiers invest in zero carbon heating before sprucing up their kitchens?

That’s where we wound up the discussion, still optimistic but very clear about the size of the task ahead.

The first episode of The Scottish Housing News Podcast can be accessed here and will soon be available across most podcast platforms.

Once published, all the COP26 articles will be available to view here. New contributions are still welcome and feel free to join in the conversation on social media using #COP26SCN.