Construction at the flagship National Manufacturing Institute Scotland (NMIS) facility at the heart of the Advanced Manufacturing Innovation District Scotland (AMIDS) in Renfrewshire has reached a major milestone with the installation of 1,500 tonnes of structural steel now complete and the building on schedule to open in Autumn 2022. The milestone was marked by a bolt-tightening ceremony, which saw Professor Sir Jim McDonald, principal and vice-chancellor of the University of Strathclyde, operator of NMIS, tighten the final bolt in the frame.

Now clearly visible from surrounding areas thanks to its impressive size and distinct heather-coloured cladding, another key element of the flagship facility is also coming to life – erection of the structural timber frame, which is set to house the collaboration hub, is now well underway. It will feature a unique lattice design and sit next to the steel framed digital factory and manufacturing skills academy. At the same time, work has begun on the glazing of a 384m2 window to the world, which will overlook Netherton Square and give passers-by a glimpse into the future of manufacturing.

When complete, the building will be around 1.5 times the size of Hampden Park football pitch and clearly identifiable from the sky above nearby Glasgow Airport.

Aiming for a BREEAM ‘outstanding’ award for sustainability - the highest accolade for sustainability in UK construction, the main contractor, Morrison Construction is integrating innovative technologies and materials that have been or can be remanufactured and reused, while also striving to avoid the use of the most polluting ones. 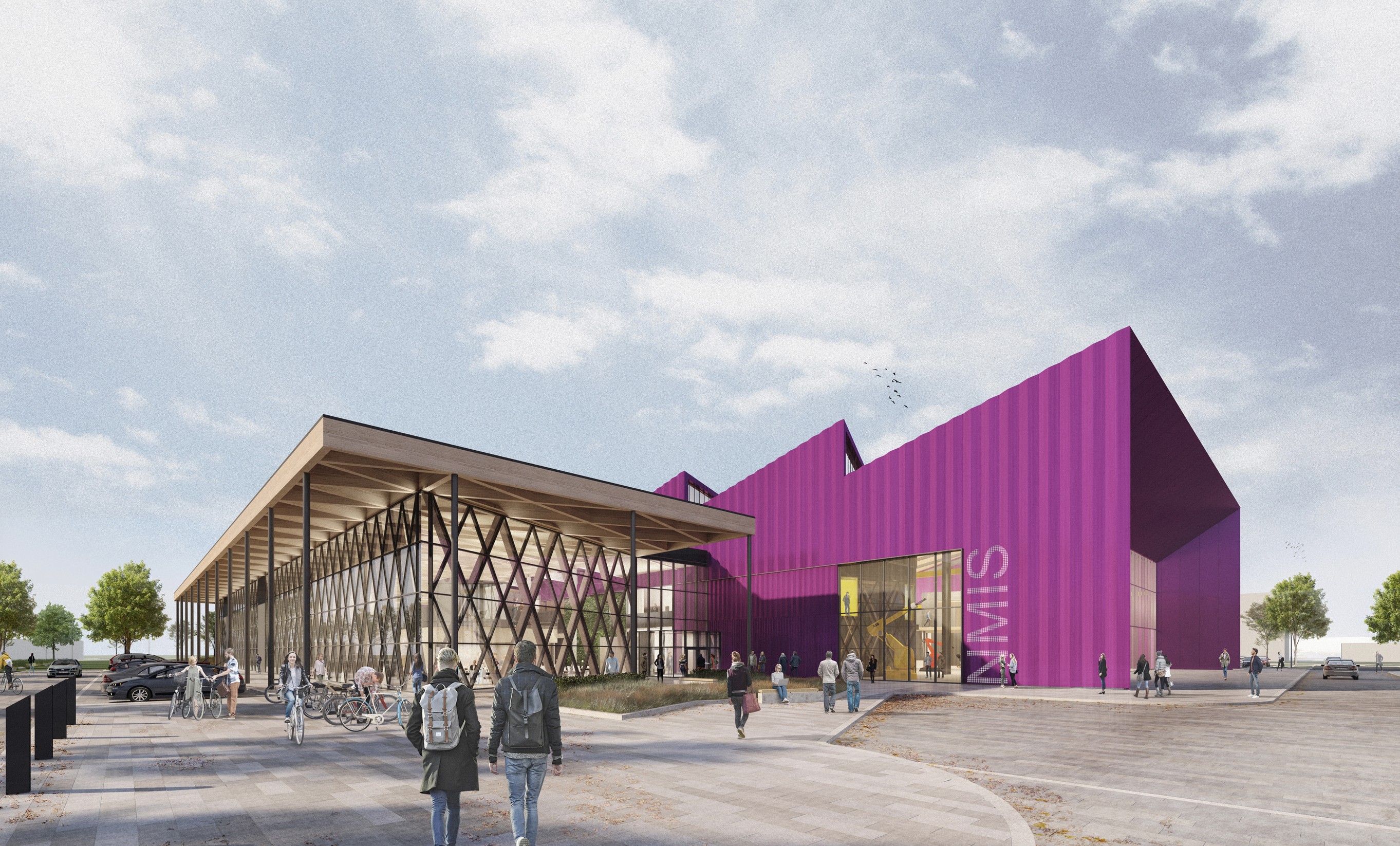 Welcoming the construction milestone, John Reid, CEO of the National Manufacturing Institute Scotland, said: “This is a truly significant milestone in the construction of our headquarters, and we are thrilled to see the building come to life. With the steel frame in place, it’s already clear what an impressive facility this is going to be and while we are very much looking forward to the building opening and continuing in our ambition to transform manufacturing, we are also working hard to ensure that our support for the Scottish manufacturing community and beyond is worthy of such a world-class facility.

“The past 18 months has been an extremely challenging time for many manufacturers, but as we come out of the other side, we are here to help them access technologies and expertise that will help them overcome problems, exploit new opportunities, increase productivity and boost the skills of the workforce.”

Professor Sir Jim McDonald said: “I am delighted to see the National Manufacturing Institute Scotland reach this significant stage in its development.

“When the facility opens its doors next year it will quickly become an important part of Scotland’s engineering and manufacturing landscape. The centre is already bringing academics, industry partners and the public sector together to create jobs, foster innovation and boost productivity and the economy of Renfrewshire, Scotland and the UK, and beyond.” Eddie Roberston, managing director, Morrison Construction Building Central, added: “The NMIS project is very much a flagship scheme for all the stakeholders involved and we are delighted to mark the progress we have made so far. The new building is set to be a first-class facility that will be the home for some very important work that will have an impact on both the wider region and the whole of Scotland when finished.”

“It’s a huge success that NMIS is being built in Renfrewshire and I am looking forward to it opening its doors, providing a big boost to manufacturing skills and productivity locally and nationally. It will also play a crucial role in attracting advanced manufacturing and engineering companies to locate to AMIDS, the development of which is also progressing at pace, creating a unique environment that fosters innovation and collaboration.”

Ross Barrett, HLM Architects’ project lead, said: “It is great to see the progression of this project, which will play a key role in attracting more investment and research in Scotland’s advanced manufacturing sector as the economy recovers. The building has been designed with collaboration at its heart, ensuring future building users are able to come together and exploit the full power of innovation and creativity. This new centre will no doubt help the region become an even bigger magnet for businesses of all types, and we look forward to its official opening.”