Two young electricians have been recognised for their exceptional talent in the Scottish Joint Industry Board (SJIB) Apprentice of the Year awards, sponsored by Edmundson Electrical. 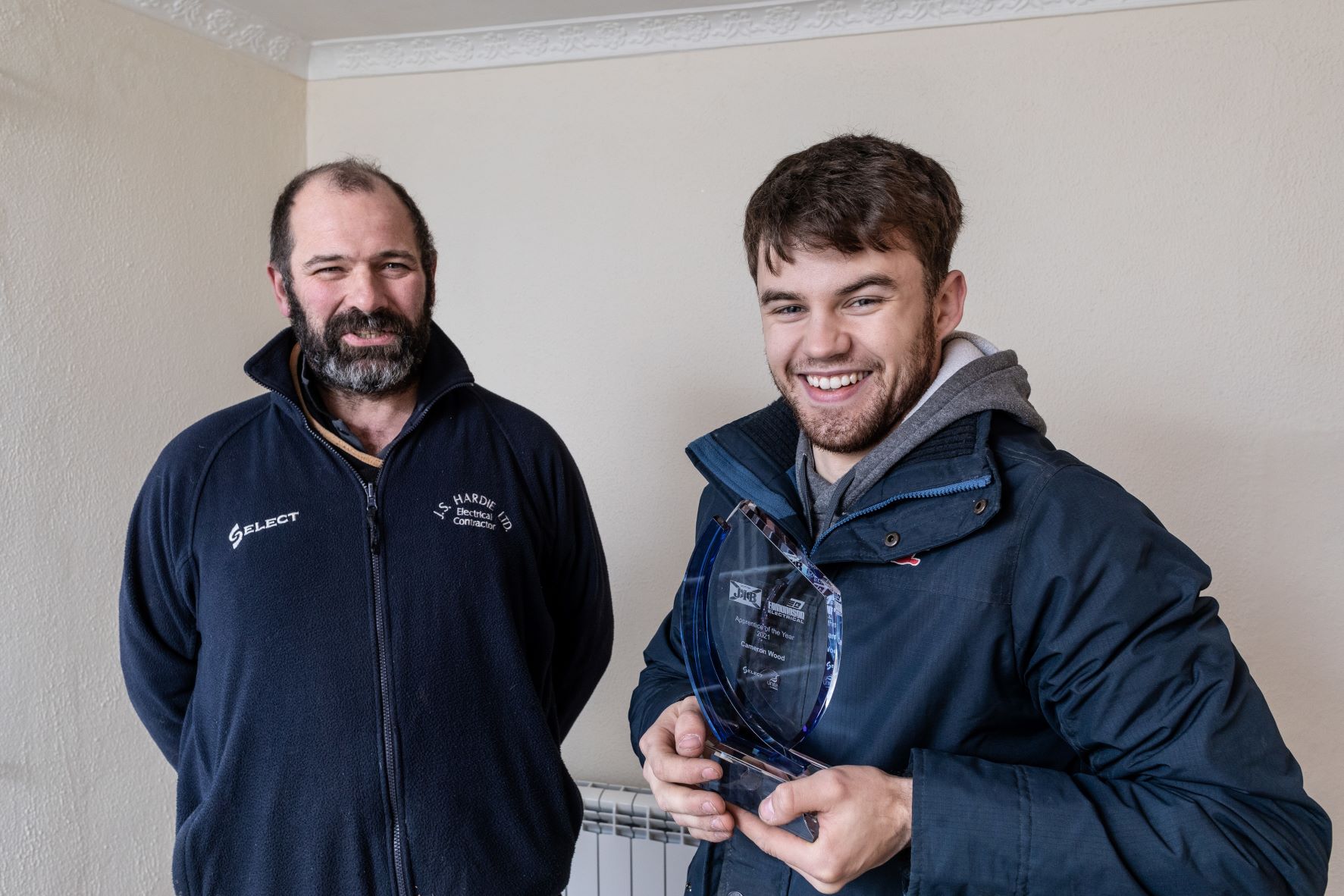 Cameron Wood and Patrick Henderson were presented with their awards and certificates in special ceremonies with their respective employers.

Cameron proudly lifted the 2021 trophy, while Patrick received the 2020 award which had to be delayed due to lockdown. Both also received £500 from the SJIB and £500 from Edmundson Electrical.

Fiona Harper, the secretary of the SJIB, said: “The SJIB Apprentice of the Year awards, sponsored by Edmundson Electrical, celebrate the best new talent in our industry, and both Cameron and Patrick have both demonstrated excellent skill and dedication.

“We were disappointed that we were forced to postpone the 2020 ceremony, but we are equally delighted that Patrick has now been recognised for his exceptional talent.”

Derek Allen, Scottish regional director of Edmundson Electrical, added: “Both winners should be rightfully proud of their achievements, and their employers and college lecturers should also be praised for continuing to help develop the talent of tomorrow.”

Cameron is now a qualified electrician who works for JS Hardie Electrical Ltd in Lauder, Berwickshire, after completing his studies at Borders College in Galashiels.

The 21-year-old said: “I was really surprised when I found out I’d won this award; I definitely didn’t expect it and it’s made all the hard work and sleepless nights worthwhile!

“I really enjoy my job. I do mainly domestic and agricultural work as well as the occasional new-build – it’s always different and I like the challenge and variation. I don’t know what the future holds and don’t have a solid plan but I have plenty of time to think about it.” 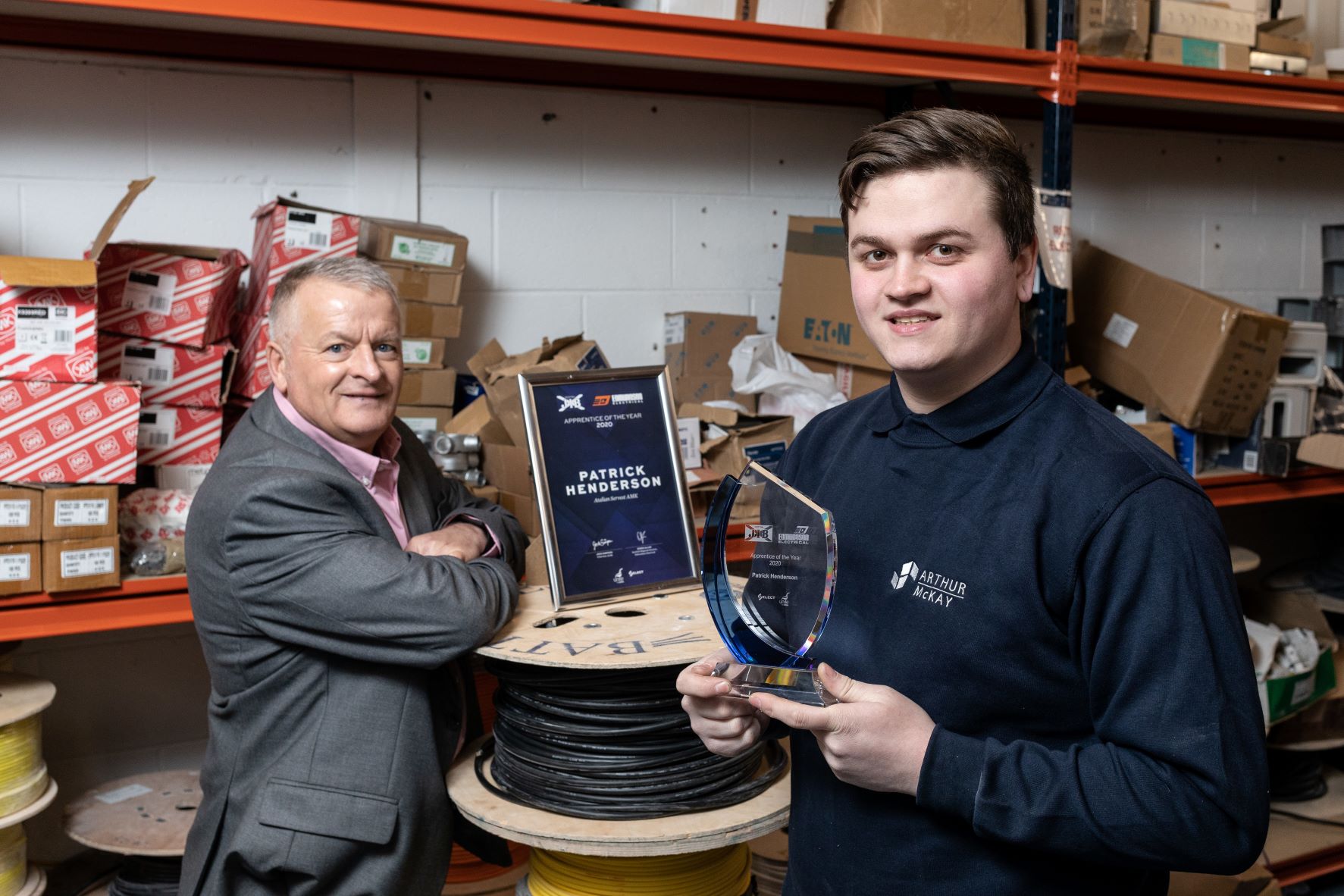 David Hardie, director at JS Hardie, said: “Cammy’s a worthy winner of this award. He picks things up well, isn’t scared to ask when he doesn’t know something and his knowledge of the regulations is brilliant.

“He’s also very particular and conscientious – everything’s always very neat and tidy and all his customers say he’s a good worker. I’m sure he’s got a great future ahead of him and that he’ll do well whatever path he follows.”

After successfully completing his training, 2020 winner Patrick now works for Atalian Servest AMK in Loanhead, Midlothian, after studying at Forth Valley College in Falkirk.

The 23-year-old said: “When I started my apprenticeship, it didn’t even cross my mind that I’d win an award like this. I just saw it as a job but it turns out I was good at it!

“It does feel strange to actually receive the award now because I’ve qualified, but I’m happy to finally get my hands on it! A lot of the credit goes to the training I got at college, plus all the support from Atalian Servest AMK and my colleagues.

“I enjoy the challenges the job brings and want to go as far as I can in my career. I’m currently doing my HNC in electrical engineering and am really pleased this is the path I followed; I feel like I’ve made the right choice.”

Atalian Servest AMK director Mike Stark said: “We’re all so proud that Patrick’s finally received his award. From day one, he knew what he wanted to do and what his end goal was. When he started, he pretty much said he wanted my job and that’s what I wanted to hear – it shows his approach to things.”

Mike added: “I’ve also got so much respect for what the SJIB and Edmundson are doing to recognise the achievements of electrical apprentices like Patrick and Cameron despite COVID-19. They deserve it.” 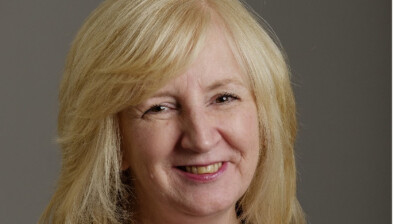 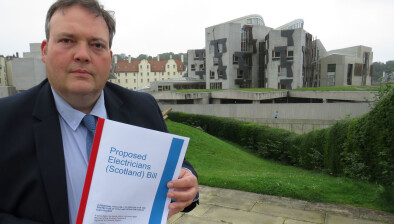