Saughton Park took a step towards becoming fully eco-powered on Friday with a ground-breaking ceremony for the park’s innovative micro-hydro scheme. 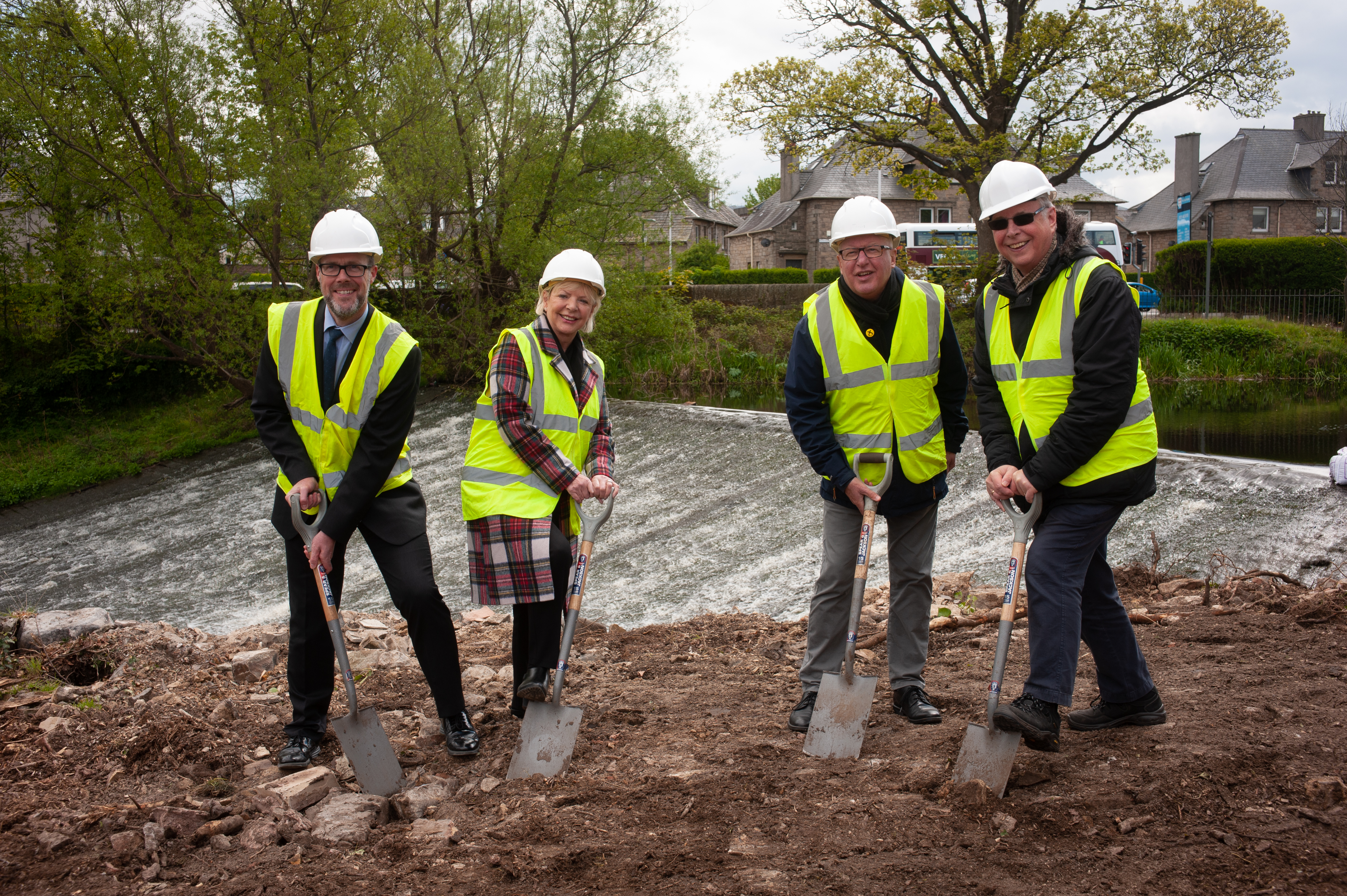 The pioneering scheme, together with ground source heating, will make Saughton Park a fully green-powered park.

The project, part of the park’s £8 million regeneration project, will involve the installation of a 39kW Archimedes Screw hydro scheme.

Combined with two ground source heating installations, this 10m-long, 10-tonne structure will prevent over 90 tonnes of CO2 being pumped into the atmosphere each year, while generating enough energy to power the whole park (lighting, buildings incl. new cafe).

The micro-hydro scheme project was partially financed thanks to £482,107 from the SP Energy Networks Green Economy Fund.

The scheme is part of the bigger Saughton Park renovation project, which includes landscaped grounds as well as a new, fully-accessible play park and a multi-use games area designed to suit roller hockey and basketball, which have already proved very popular.

Meanwhile, work continues on a brand new cafe for the park - due to open its doors to customers in June.

CALA Homes (East) is “plugging in” to the surging demand for electric vehicles (EVs) by creating the most comprehensive charging provision of any development built to date in Scotland. 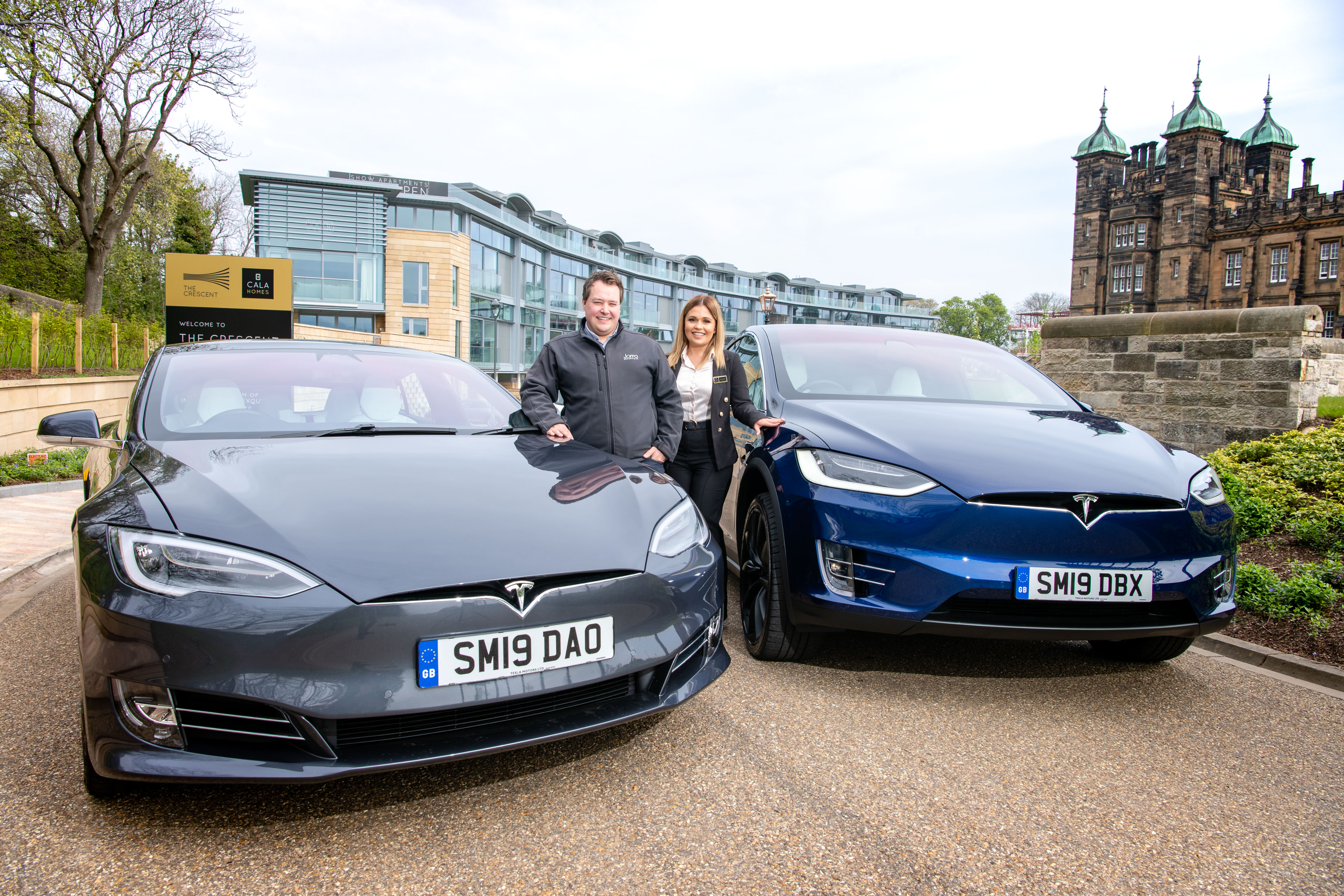 All 84 apartments at The Crescent at Donaldson’s will be served by an EV fast charger, with the infrastructure built into the underground parking at the Edinburgh development.

The Crescent is home to a selection of unique apartments located in the city’s UNESCO World Heritage Site.

The provision is a result of a tie-up with EV charge point installers Jorro Ltd with The Crescent marking its largest developer project to date. 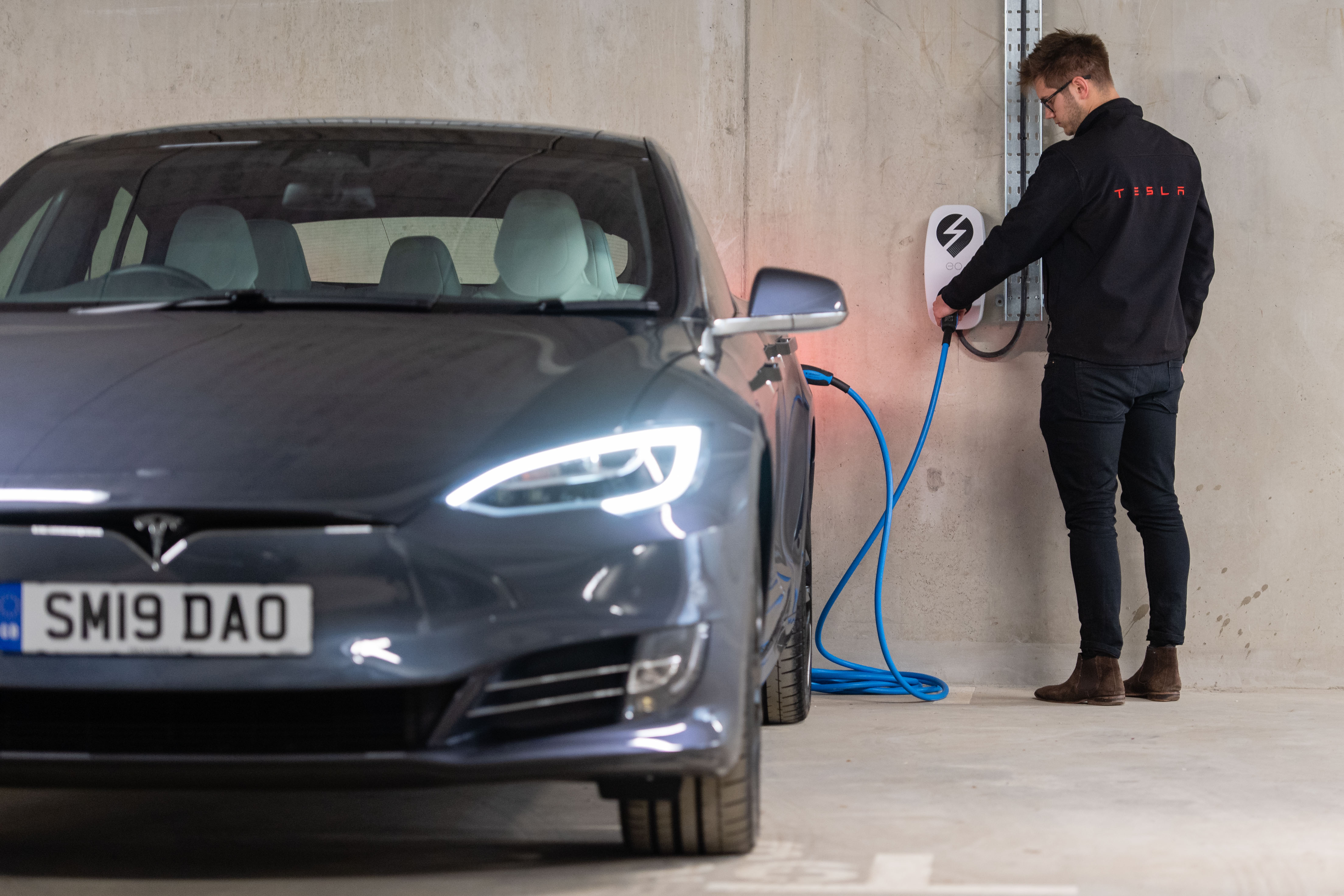 Electric car manufacturer Tesla drove two of its premium vehicles into the grounds last month to test the facilities.

Owners at The Crescent will have access to an EO Genius charging unit, fully connected to the mains, with a dummy unit in place until the final set up is made. It is the first time an apartment development of this scale in Scotland has featured a comprehensive EV infrastructure.

The underground parking at the development is a result of a desire to minimise the impact of cars on the famed setting. A major excavation project in itself, its creation witnessed around 36,000m3 of earth transported to restore a former quarry in Ratho.

The team at Ground Developments Ltd has recently completed a nine week enabling works contract to deliver a development platform to facilitate new-build housing for Miller Homes to construct around 88 new homes at Queen Mary Avenue in Clydebank.

The project included a cut/fill operation of 10,000m³ as well as the over excavation and  replacement of 8,000m³ to provide a competent strata to construct the housing platforms. Site won material was screened and the fines modified to re-engineer material previously designated for landfill to remain on site.

GDL’s approach provided a number of benefits to the local community, as well as being good for the environment which saw 17,800 tonnes of non-hazardous soils being diverted from landfill; a reduction of 900 lorry movements and standard strip foundations placed on modified soils without the need for trenchfill.

GDL said it has pioneered the use of soil modification techniques for use under new-build housing in Scotland over the last ten years.

Tenants at Osprey Housing Group’s brand new housing development in Peterhead have been settling in after getting the keys to their affordable homes. 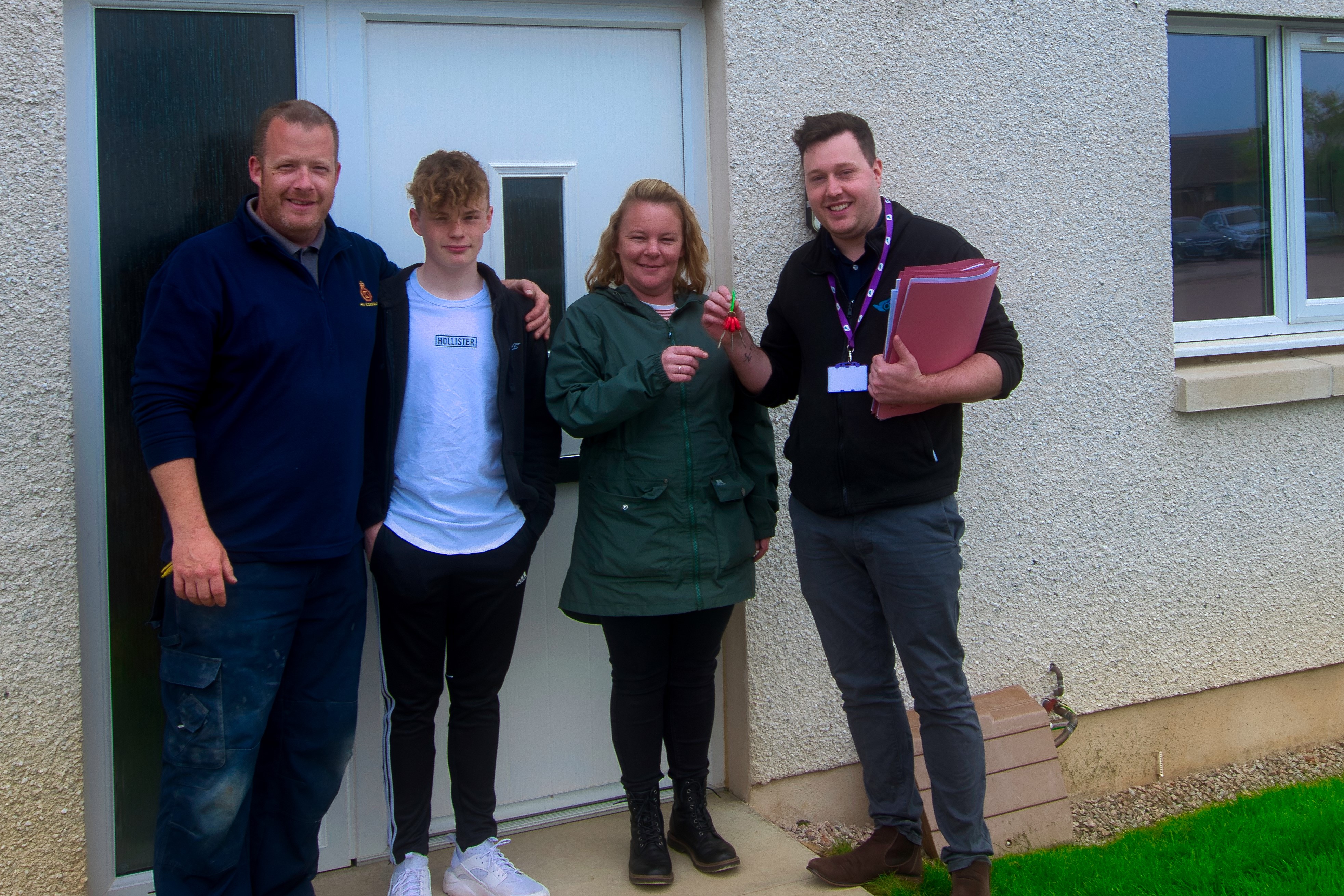 The Upper Grange project — comprising 14 three-bedroom terrace houses and nine two-bedroom flats — significantly boosts the supply and choice of much-needed affordable accommodation in the town for a mix of couples, families, and people on their own.

Originally due for completion in September last year, the Lingbank Close development had to go on hold after main design-and-build contractor Deveron Construction Ltd went into administration in June 2018.

Bancon Construction took over the project following a re-tendering process and began work at the end of October.

Also affected by Deveron’s collapse was Osprey Housing Moray’s development of six three-bedroom family houses in Ripley Place, Keith, which was also completed by Banchory-based Bancon. The first families moved in there at the end of January.

All the Peterhead and Keith properties — which are now fully occupied — have been built to a high specification meeting the latest energy-efficiency standards.

A developer has resubmitted plans to Angus Council for the construction of four new homes in Strathmartine.

All four homes proposed for the site are identical detached double storey dwellings.

Developers will also install an access road adjacent to the Kirkton of Strathmartine graveyard.

Planning permission for homes on the site has been submitted several times over the last two decades.

Plans for the homes were originally submitted in 2005 but were allowed to lapse.

Revised plans were then submitted for six homes on the site in April last year but were subsequently withdrawn.

A new £25 million fund has been announced to help support rail freight services across Scotland.

Open to all industry partners, the ring-fenced funds will look to strengthen rail freight over the night five years.

Partners, including Network Rail and Transport Scotland, are encouraged to table proposals for improvements which meet freight modal shift objectives. Innovative proposals which meet strategic objectives without costly infrastructure upgrades, for example wagons/locomotives or other interventions, are also welcome.

The Fund will be administered by Transport Scotland and a new Scottish Rail Freight Forum will be established including members from across the industry.

A further consultation event is set to take place on plans to transform West Blackhall Street in Inverclyde.

Inverclyde Council is hosting a public consultation evening in Café Balfe from 4pm till 7.30pm on Thursday 16 May.

This event will help shape plans to revitalise the street and promote investment in Greenock town centre. It is the next stage in the evolution of proposals originally developed in consultation with town centre traders and users last year.

The consultation is funded by the Scottish Government through Sustrans Scotland’s Places for Everyone scheme.

Asbestos sufferers will benefit from a £8,000 fundraiser after dedicated walkers completed a massive 20-mile charity walk. 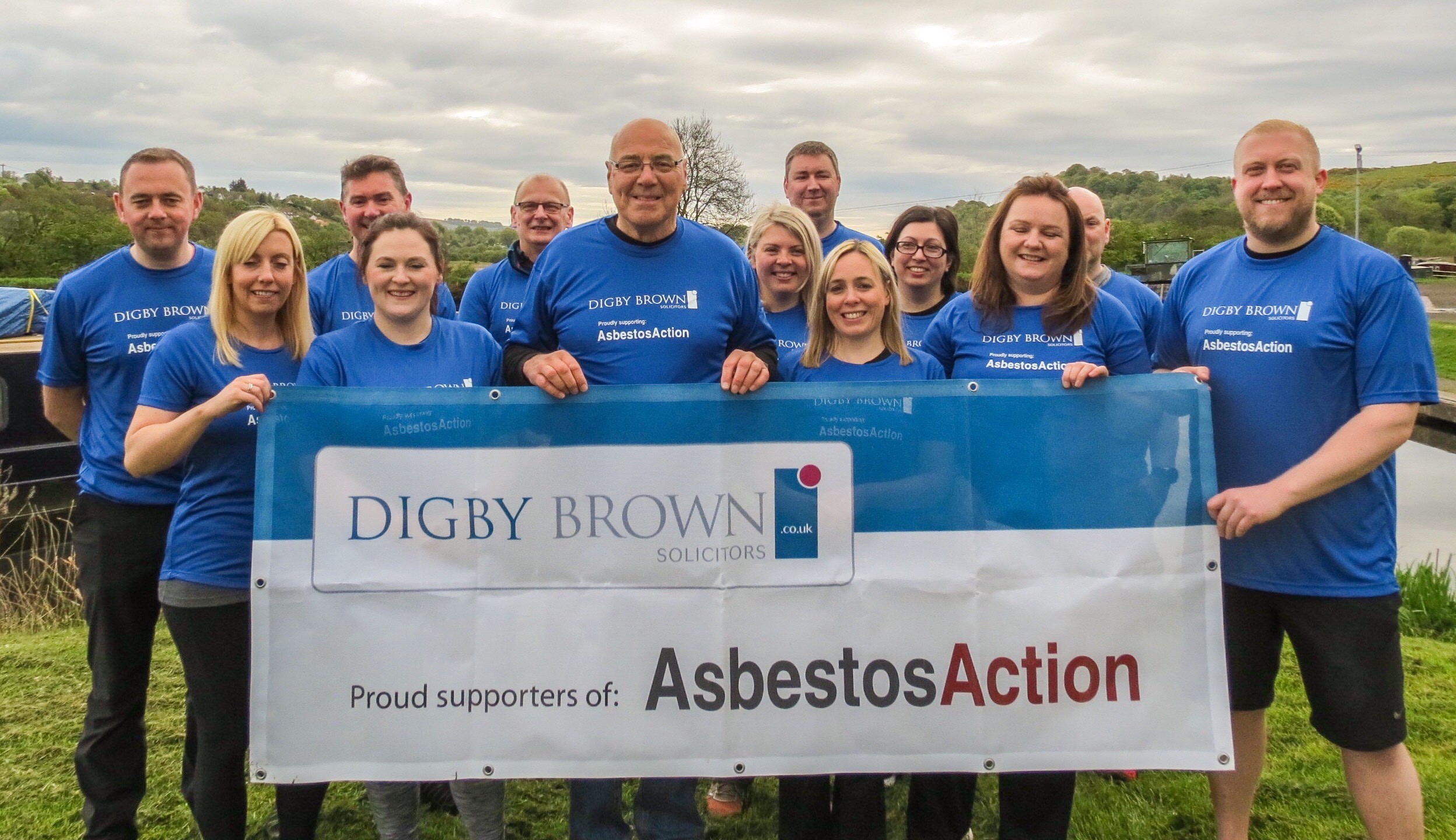 The marathon trek saw 11 volunteers pound the Forth Canal pathway between Croy and Clydebank.

The 20-mile route - which ended at the International Asbestos Memorial - symbolises a mile for every year that asbestos has been banned in the UK.

Funds raised will go to not-for-profit charity Asbestos Action which supports sufferers of asbestos-related conditions and their loved ones.

The walking team, which included specialist industrial disease lawyers from Digby Brown Solicitors, amassed an incredible £4,000 via an online fundraising page with the legal firm matching their total. 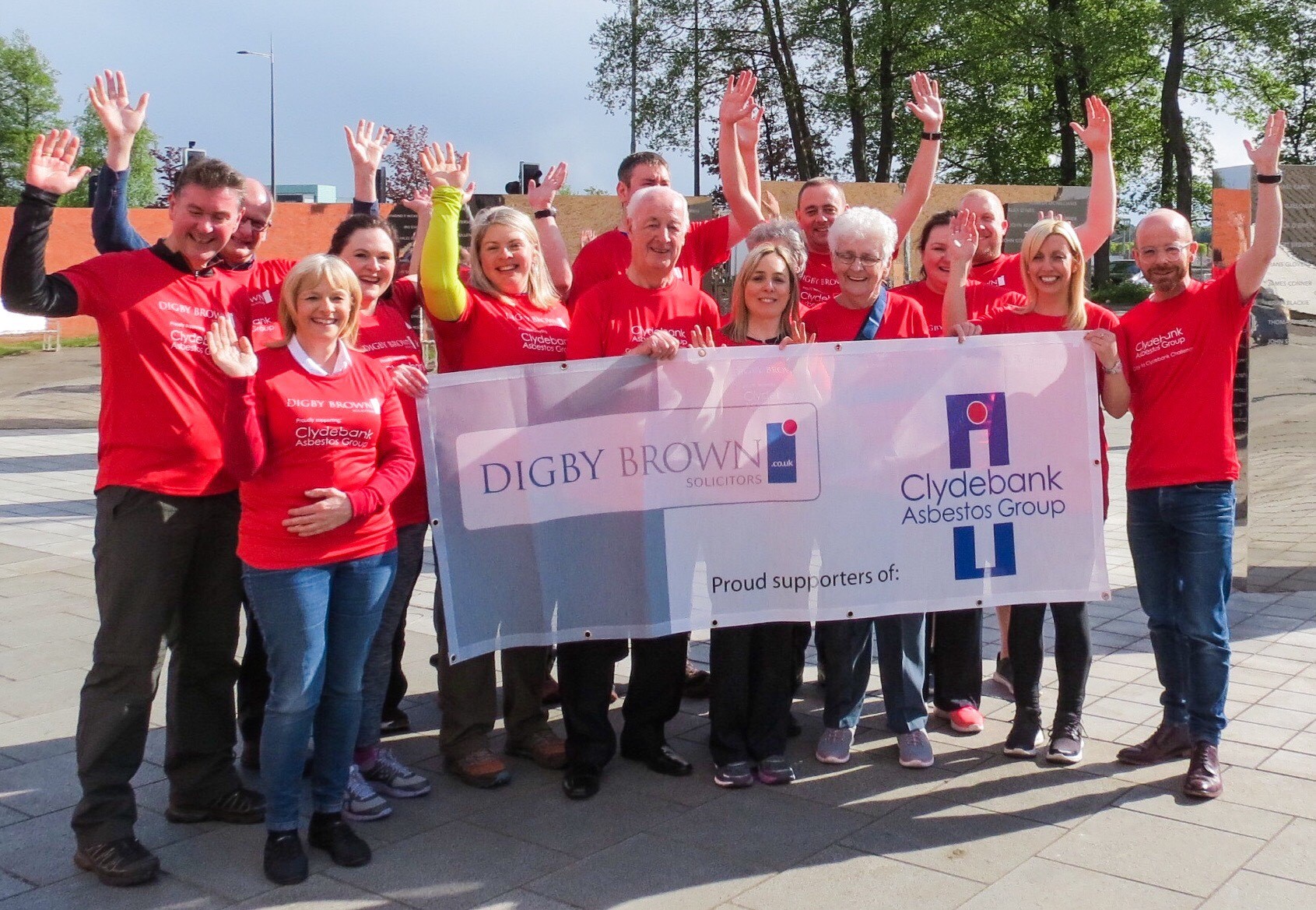 It follows the same team’s efforts last year when they raised £8,000 after completing a marathon 26-mile trek along the Fife Coastal Path.

To contribute further to the cause visit the team’s Just Giving page.