The big-hearted Kilmac team has risen to the 10xChallenge in support of the STV Children’s Appeal. 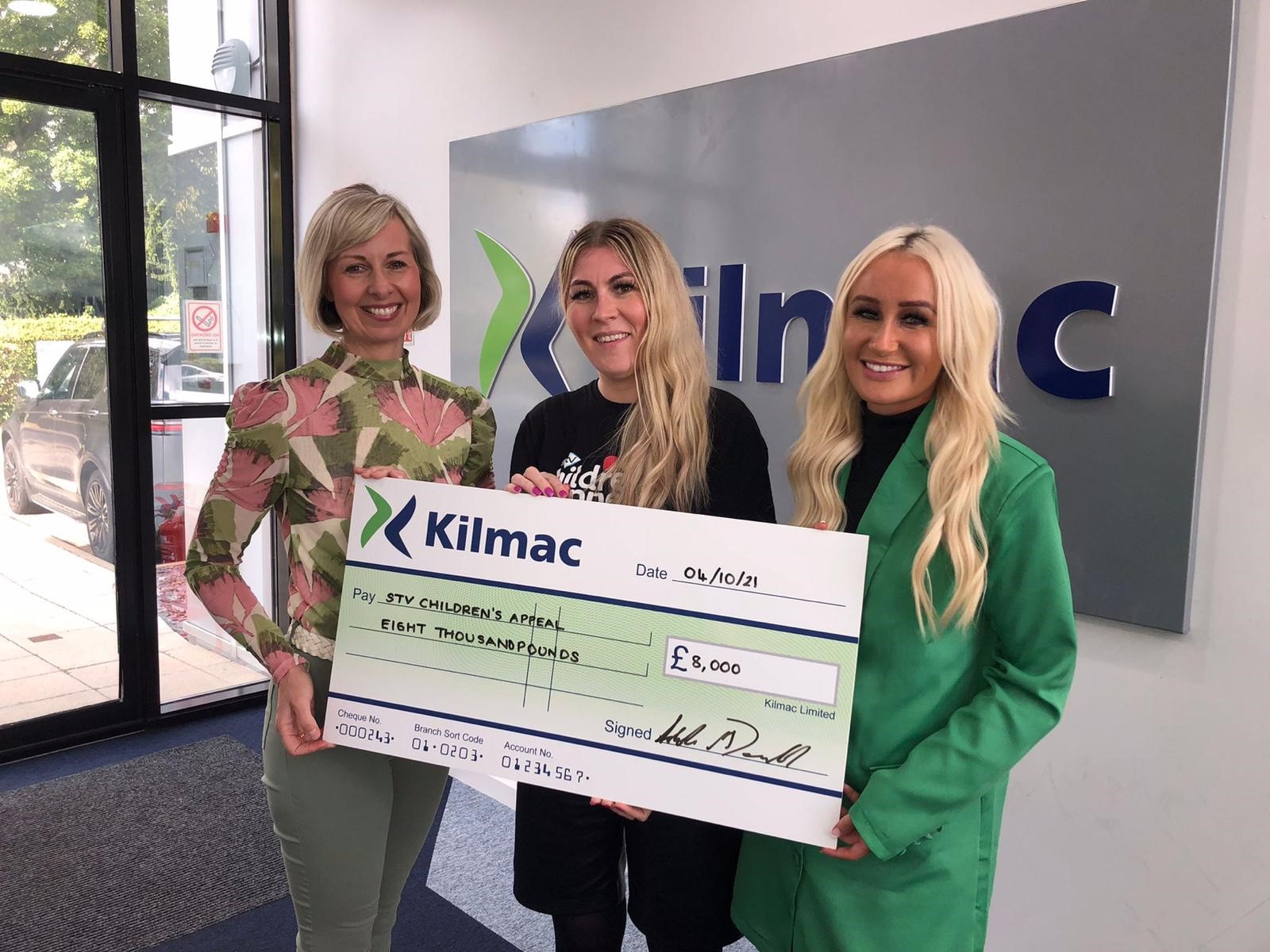 The firm’s initial target of £2000 was blown out of the water as the staff’s efforts raised an amazing £4,000 and the Kilmac Foundation has match-funded the tally to make an £8,000 donation to the charity.

STV presenter Susan Nicholson was welcomed to Gemini Crescent in Dundee to accept the cheque.

Just one example of that was the recent fundraising challenge undertaken by group buyer Bert Hope.

He took on the exhausting Cateran Yomp and raised £5,000 for ABF The Soldiers Charity after completing 54 miles in 21 hours 33 minutes. The team did well to finish 122nd out of 515.

The funds raised by the STV challenge are being used to tackle child poverty and it was great to see office and site staff supporting the various challenges.

An updated five-year programme of investment will see more than £117 million invested in schemes to help people walk, wheel and cycle in Edinburgh.

Under the Active Travel Investment Programme (ATINP), the City of Edinburgh Council will deliver over 85km (52 miles) of additional safe, protected cycle routes – the equivalent of a trip from Edinburgh to Aberfeldy. These measures, which are already in the pipeline, will help children to walk, cycle and wheel to many of the city’s schools and provide significant improvements to public spaces, pavements and paths.

The City of Edinburgh Council will pay for less than 20% of the ATINP as most of the funding is secured from external sources, with more than £80m committed by the Scottish Government via Sustrans. A report to be considered by the Transport and Environment Committee next week on October 14 covers a review of the ATINP. It aligns the plans with a Sustrans budget review as well as the delivery of council projects and priorities. Changes in travel behaviour relating to the Covid pandemic are also examined, taking into account the temporary measures introduced under Spaces for People, now Travelling Safely.

In addition to several major projects to transform the city, like City Centre West East Link and Meadows to George Street, the ATINP will increase spending on key improvements to prioritise travel by foot, wheel or bike. This includes the installation of dropped kerbs and citywide bike parking.

A Peterhead building saved from demolition last year is now poised for a new lease of life as a vibrant addition to the town centre.

The former North School, and later Glenugie Business Centre, has been lined up for a variety of uses.

Councillors have approved proposals to turn the site into office space, a restaurant, bar and function suite as well as a new five-bedroom house and day spa.

The building dates back to 1877 when it was used as a school.

It was also the home of Peterhead Music and Rock School and social work offices latterly.

Plans have been officially revealed for a new floating wind farm that could supply power to more than half of the homes in the Highlands.

Until earlier this year it was thought proposals for a floating development in the Pentland Firth, off the Caithness coast, had been shelved.

Swedish developer Hexicon initially put forward the scheme but the plans dissolved in 2017 when a company set up to lead the project folded.

And despite a pledge by Hexicon to get the development – then called Dounreay Tri – “back on track”, there had been no movement on it in recent years.

The development will support Scotland’s ambition to generate 50% of the country’s energy consumption from renewable sources by 2030.

The former Mackinnon Country House Hotel on the Isle of Skye has been acquired by the Fusion Group hospitality business for a price believed to be around £750,000.

The historic property, set in nearly five acres of grounds at Kyleakin, will continue to be run as a hospitality venture. It is being rebranded as The Isle of Skye Guest House. Subject to planning permission, Fusion intends to develop part of the house grounds into a “modern lodge park”. It proposes 34, two-bedroom lodges for let, alongside a custom-built “club house”.

Built in 1912 by Major Archie Mackinnon, the house is overlooked by the Sgurr na Coinnich mountain range, and is one of the first stop-off points after the Skye Bridge. The property has nine en-suite bedrooms in the main guest house. A further six, also all en-suite, are in a separate garden lodge. A spokeswoman said the seller is a “private family”.

Edinburgh estate agency Cullerton’s is celebrating after being named No. 1 in Scotland just four years after launching in the city.

The firm, which specialises in upmarket homes, came out on top in The Herald Property Awards and the accolade is the first major honour for the business since being set up in the Stockbridge area of the capital in 2017 by Mark Cullerton.

It comes after a difficult 18 months amid the challenges posed by the Covid-19 pandemic and Mr Cullerton said: “I couldn’t be happier at getting this award as we are such a young company.

“We were the only estate agency in Edinburgh to be short-listed which was a big thing in itself but to actually win was a huge achievement.

“This is our first major honour since the business started up four years ago and all credit to the team for their hard work and application during what has been a challenging period.

“This gives our team a real boost and we will keep working hard to provide the best bespoke personal service possible.”

A historic religious statue that stood on a former chapel in Dumbarton for almost a century has been saved by the new site owners and reunited with Sisters at the neighbouring Carmelite Monastery. 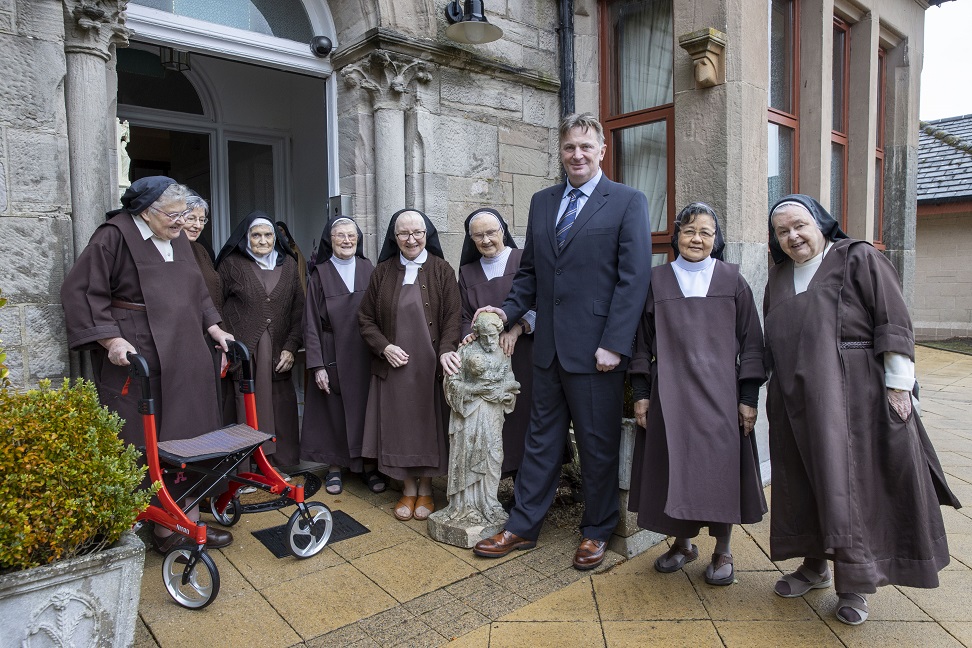 Sandy Easdale, who together with his brother James owns the site on the town’s Cardross Road, returned the statue of St Joseph at an event at the Carmelite Monastery at Craigend House, Cardross Road.

The statue depicts St Joseph cradling the baby Jesus and stood on the south wall of the former Chapel of the Convent of the Sisters of Notre Dame.

The chapel fell out of use in the early 1990s and the church applied for permission in 1996 for its demolition. In 1998, the chapel was ravaged by fire in an arson attack and since that period, it has been repeatedly targeted by vandals. In 2016 the building was de-listed and permission was finally granted to the new owners to disassemble the building in 2021.

The wider site formerly hosted St Michael’s Primary School and is now subject to a planning application for 85 homes as part of a £30 million rejuvenation of the site. The site in its entirety has been allocated in West Dunbartonshire’s local development plan for residential housing for some time.

Alan Young, from Lochmaben roof tile manufacturer Russell Roof Tiles, has blasted his original target to raise over £2,000 by taking up the Etape Caledonia cycling challenge. 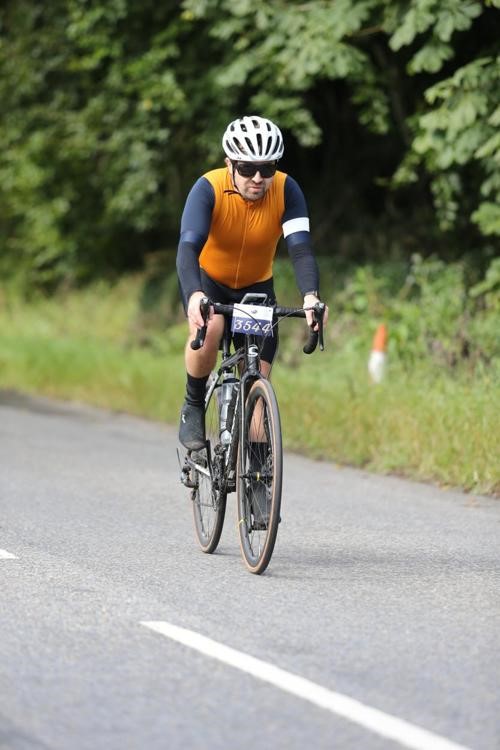 Alan cycled 85 miles around the hills of Pitlochry, for Beatson Cancer Charity. Beatson is a small cancer charity based in Glasgow that provide support to families and patients, and one close to Alan’s heart, as they supported his own family when they lost his father to cancer, 23 years ago.

Russell Roof Tiles was founded on its current site in 1964 as The Annandale Tile Company with the purchase of an 11-acre site in Halleaths, Lochmaben.