Scottish kitchen designer and retailer Kitchens International was once again celebrating as it won three out of five kitchen awards at the KBSA Awards 2019 last week. 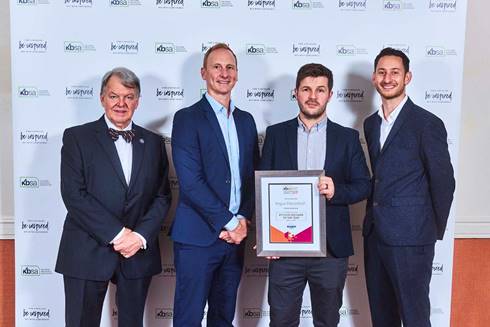 Aileen Thomson, senior designer in contracts, was awarded the up to £25k category with her innovative design for a whole apartment in Glasgow. With an open plan, kitchen living and sleeping area this marked a new departure for the company’s designs.

Concept Design of the Year went to sales designer Gary Gourley whose creative design just pipped his colleagues’ designs, with four of the five finalists all being KI designers.

Kitchens International’s 25th year has been quite a year for the company – in March it won the coveted KBB Review Kitchen Retailer of the Year and Showroom of the Year, and now it has swept the board at the KBSA Awards.

Work has now been completed on the new extension at Smithton Primary School in Inverness.

Works completed under the current phase comprised the provision of five new classrooms, pupil and staff toilets, an extension to the gym/dining hall, reception, offices and other facilities as well as improved car parking arrangements.

Work will start soon on converting the new unit that was used as a temporary administration/staff area during the works into a third nursery room to meet the required increase in early learning and childcare provision from August 2020.

The total investment is £4.5million, funded from Highland Council’s capital programme and the Scottish Government allocation for the expansion of early learning and childcare provision.

Works were completed by Morgan Sindall and the project was designed and managed by the council’s property team in development and infrastructure.

Councillor Trish Robertson said:  “I am very impressed. It is great to see the work all finished, the wonderful new rooms created and the improved facilities. This high-quality extension is a great asset for the community and I am sure the school staff and pupils will thrive and enjoy the extra space.”

Highland Council has announced that it will be hosting energy efficiency events in Badenoch and Strathspey next week.

The events arrive after the Scottish Government awarded the council funding to deliver area-based energy efficiency programmes in the Highlands.

The Scottish Government grant, in conjunction with Energy Company Obligation (ECO) funding, and a homeowner contribution will help owner-occupiers and privately rented properties to improve the energy efficiency within their home.

Two drop-in Community events have been organised in the Badenoch and Strathspey area next week to provide more information.

The first session takes place on Tuesday 8 October in Grantown YMCA from 2pm to 7pm and the following day, Wednesday 9 October, the event will be held in Newtonmore Village Hall from 2pm to 7pm.

Letters from Highland Council are being distributed to homeowners in the Badenoch and Strathspey area inviting them to call into these sessions to meet representatives from the council and E.ON, ask questions and confirm eligibility.

Other homeowners are welcome to attend to gather information on energy savings.

This annual industry event in the UK enjoys support from major industry bodies including RIBA, RICS, CIOB, ICE, IstructE, CIBSE and RTPI and regularly attracts both funding and competitors from major construction companies and consultancies around the UK.

“The event is quite simply, unrivalled,” said Richard Brindley who represents the charity. “During an intense two-day simulation of a real, high profile design and build project, qualifying competitors undergo accelerated training as well as gaining the chance to network with fellow professionals from all disciplines.”