Economy secretary Derek Mackay has marked the start of work on a new building being delivered by Clyde Gateway in the heart of the East End of Glasgow which is set to become the headquarters of the Scottish Trades Union Congress (STUC). 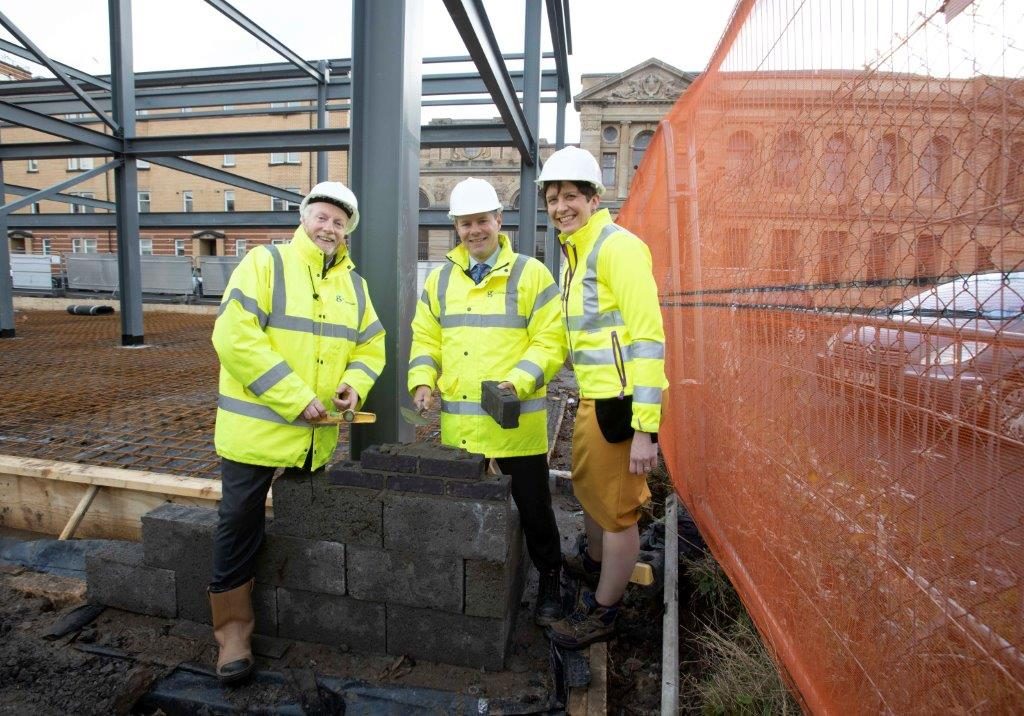 The STUC had undertaken an extensive search to find an office and location that would best suit its needs over the next thirty years, finally choosing an option proposed by Clyde Gateway for a new-build on Landressy Street.

The site is directly adjacent to the building occupied by Glasgow Women’s Library following its move to Bridgeton in 2015.

The new offices will offer 6,500 square feet of space, incorporating a significant element of conference and meeting spaces that will bring visitors to the Bridgeton area on a regular basis.

The £2.1 million costs are being met by Clyde Gateway, with a grant of £730,000 from the Scottish Government and the completion will be the seventh new or refurbished block in Bridgeton and Dalmarnock delivered by Clyde Gateway since 2012.

Economy secretary Derek Mackay said: “I am delighted that Clyde Gateway has attracted such a high profile organisation to its latest office development here in the East End of Glasgow. Backed by direct funding from the Scottish Government and the vision of Clyde Gateway, Bridgeton and Dalmarnock have become increasingly attractive locations for people to live and work.

“The new STUC headquarters is being constructed on a site that had lain vacant and derelict for a number of years and is the latest stage in a truly world-class transformation of the area. The various physical improvements are being accompanied by an extensive range of social and economic spin-offs, all of which are ensuring many of the social inequalities which have stymied growth for so long are becoming a thing of the past.

“It would have been hard to imagine even just a few years ago that this area would be home to such a broad range of public and civic agencies, including Police Scotland, the University of Glasgow and the Glasgow Women’s Library.”

Grahame Smith, the general secretary of the STUC, said: “In weighing up very carefully everything associated with a possible move away from our current home in the west end of the city, the conclusion was that the option of Landressy Street was the best fit for the long-term requirements of the STUC while also offering a genuinely unique opportunity to make a contribution to what is a world-class regeneration effort.

“Building community power and fighting for economic and social equality is written into the DNA of the STUC. So this is much more than a building for us, it’s an opportunity to be part of something bigger.

“We spent some time looking at the Landressy Street option, with the General Council and staff coming to the area to get a close-up look at the changes underway. We spoke at length with organisations and companies who had moved recently to Bridgeton and Dalmarnock, along with people who had been part of the fabric of the communities going back decades.

“It was particularly striking to hear real enthusiasm for everything that was happening. Everyone also felt they had an ability to make a difference to improve the quality of everyday life and it made perfect sense for us to want to sign-up to be part of it all.

“The new building is coming along very nicely and everyone is looking forward to making the move here later this year.

Alison Thewliss, chair of Clyde Gateway, added: “The local communities made it clear from the very beginning that bringing jobs back to the area had to be our top priority. We promised them that we would work tirelessly to attract every possible type of organisation and company to the area from all walks of life.

“It is highly significant that we have been able to attract such a significant part of civic Scotland to the Clyde Gateway area. The presence of the STUC will be another positive change in respect of the perceptions of the area and, sitting alongside the Women’s Library and very close to the University of Glasgow’s presence on the top floor of Olympia at Bridgeton Cross, we are now beginning to see the establishment of a significant civic hub of buildings in the area.

“I want to thank everyone at the STUC for making this commitment to the area. I also want to thank Derek Mackay and his colleagues within the Scottish Government for their unstinting support for everything we are seeking to achieve across Clyde Gateway over the past twelve years, and look forward to the continuation of a successful partnership as we make further progress.”