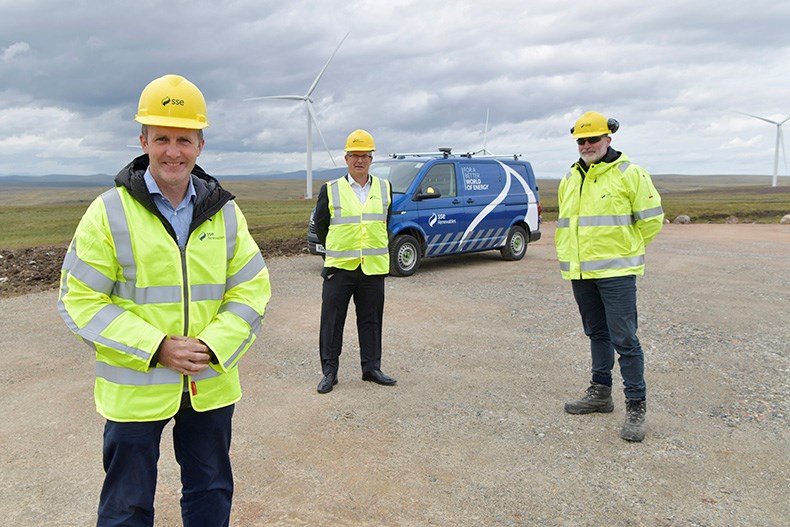 Situated 10 kilometres north east of Brora, the SSE Renewables-owned onshore wind farm comprises eleven of the latest Siemens Gamesa onshore wind turbines. Construction commenced around 18 months ago and was delivered during the pandemic.

Over its expected 25-year lifetime, Gordonbush Extension wind farm will typically save over 37,000 tonnes annually of harmful carbon dioxide emissions, helping Scotland and the UK to transition towards a Net Zero carbon future.

Mr Matheson said: “Onshore wind is one of the most cost-effective forms of large-scale electricity generation and will be vital to Scotland’s future energy mix as we end Scotland’s contribution to climate change. The Scottish Government’s draft Onshore Wind Policy Statement, which I intend to publish shortly, will underline the key role that onshore wind energy will continue to play in this journey, as well as our determination to seize the economic benefits from this growth.

“The Gordonbush extension project marks another step forward in decarbonising our energy demand and realising our net zero ambitions. My congratulations go to everyone at SSE involved in the project. Its construction and completion, much of which has taken place since the pandemic began, is an excellent example of the green recovery we must continue to build on to ensure a just transition to net zero.”

Gordonbush Extension, being a particularly well-sited extension project, is the first wind farm development to be built by SSE Renewables on a merchant basis, which means no subsidies or CfD support were used to finance the project. The construction and delivery of the wind farm earlier this year was achieved by the SSE Renewables project delivery team in spite of the challenges of the pandemic, and after overcoming the worst Scottish winter weather in recent memory.

“This wind farm is a prime example of the work we are doing to make sure we meet Scotland and the UK’s net zero targets. However, we should not underestimate the trying conditions under which the wind farm was delivered.

“As well as coping with extreme weather conditions this asset has been built during a pandemic. As always the safety and welfare of colleagues has been our priority throughout and with this in mind the Gordonbush Extension team have done a tremendous job in trying circumstances.

“Colleagues across SSE and SSE Renewables can be immensely proud of their involvement and the achievement that Gordonbush Extension represents.”