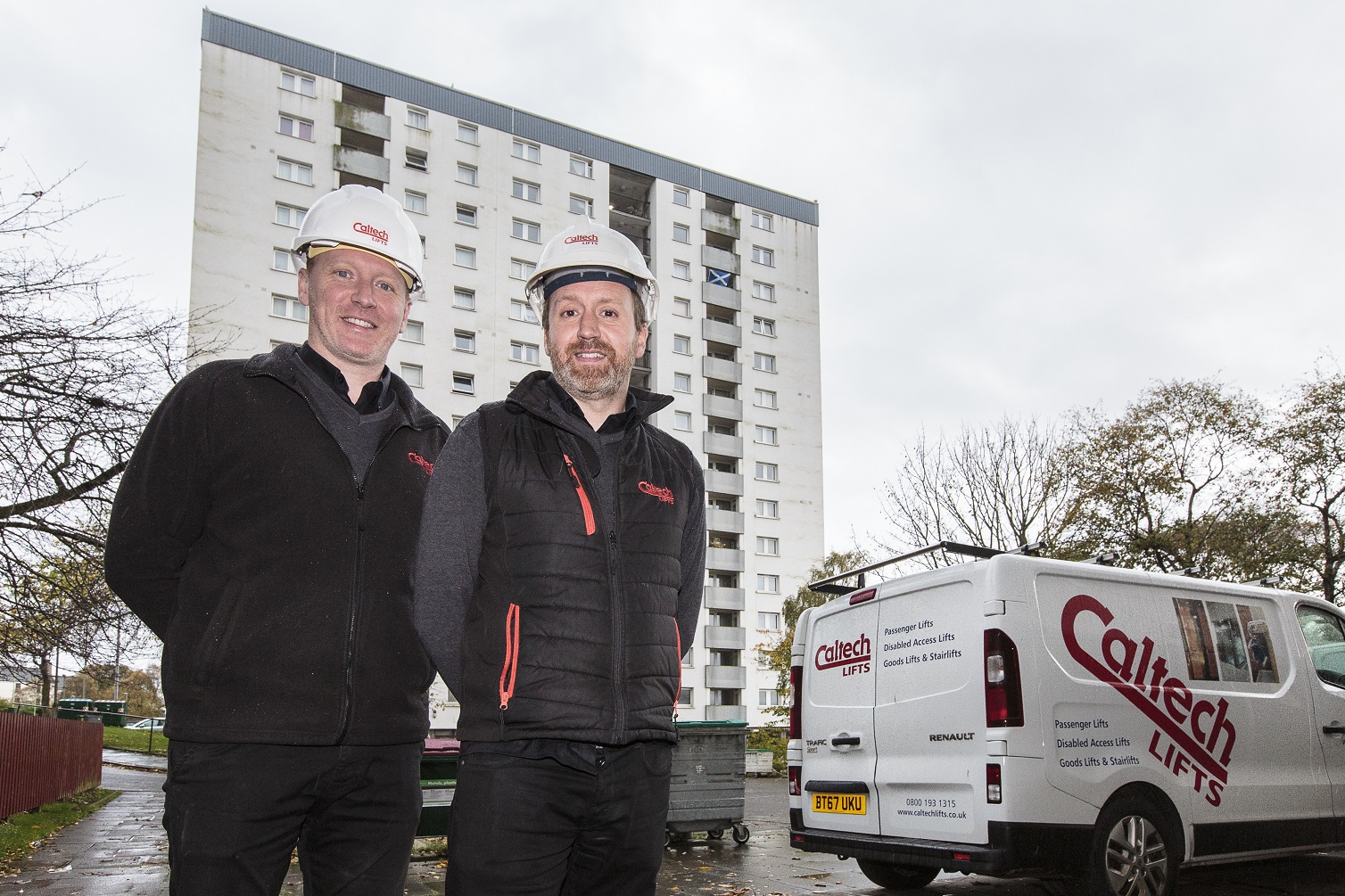 Fraser (left) and Andrew Renwick in front of Tulloch Court

A new £1.37 million high-rise lift replacement project for Dundee City Council will help Caltech Lifts towards its goal of achieving £4m annual revenue by the end of October next year and moving to larger premises in the city.

The Dundee-based family firm began work recently on the project to replace eight ageing lifts in the multi-storey flats at Dallfield Court, Hilltown Court, Tulloch Court and Bonnethill Court in the Hilltown area of the city.

Each block’s two lifts will be replaced in turn by ones with the latest technology – offering a better ride for residents and greater reliability thanks to a remote monitoring system which will allow Caltech to carry out preventative maintenance before a breakdown would occur during the warranty period. After that, the council’s lift team will be able to do the same using the lift software. The lifts will also cost the council less in power - thanks to brake energy regeneration drives.

The company, run by brothers Andrew and Fraser Renwick, was awarded the contract in May after a competitive tender process and expects to complete the project in early 2024.

Dundee City Council is one of several public sector clients for Caltech, whose others include the local authorities in Edinburgh, Aberdeen, Aberdeenshire, Angus, West Lothian, Perth and Kinross and East Lothian. Recent public projects include ones at schools in Edinburgh, Perth and a science building in Aberdeen.

Caltech said the Dundee high-rise project will help towards its goal of £4m annual revenue by the end of October 2023 after two years of around £2.6m due to several projects being delayed by Covid-19 knock-ons. Staff headcount will soon rise by three to 26 – with the addition of a new lift engineer, labourer and an admin person.

Profit from the Dundee City Council project will also help Caltech achieve its goal of moving to larger premises by 2025, having outgrown its base at the city’s docks. The decision to buy or build its new HQ will be taken once Caltech has sufficient funds set aside.

Speaking about the contract win, Caltech Lifts managing director Andrew Renwick said: “We’re naturally delighted to have won this work for Dundee City Council, after having successfully completing a similar project for it in 2016.

“2022 has been busy with projects delayed by Covid and, despite the predicted recession, we are very positive about 2023 as we already have a lot of exciting projects secured for next year.

“All the while, our maintenance portfolio continues to grow as Increasing numbers of private businesses and local authorities switch to us because of our reputation for providing thorough services, fair value repairs and rapid response times to breakdowns.”