A ten-year regeneration plan for the centre of Glasgow, which includes taking cars away from the city centre, the redesign of George Square and revamping Hielanman’s Umbrella, will soon go out to public consultation. 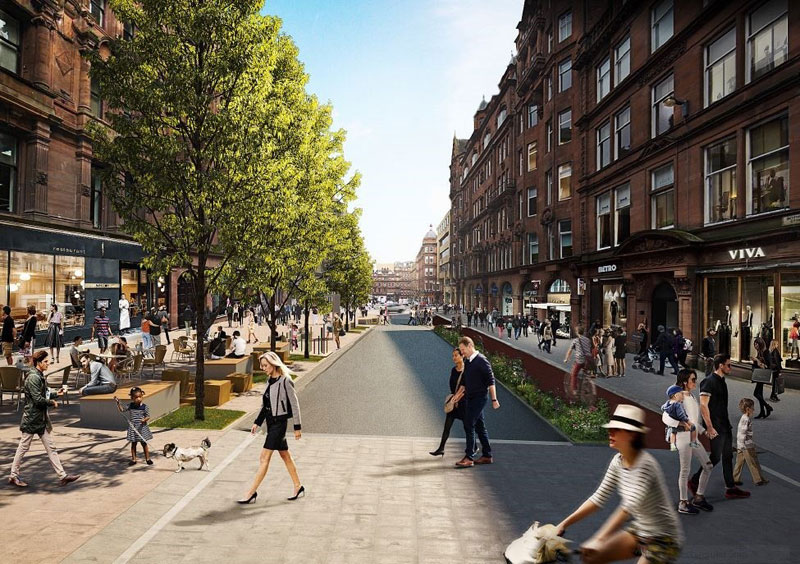 How Bothwell Street could look under the proposals

The Central District Regeneration Framework, which will guide the physical, economic and social regeneration and development of the area, could also see more trees, a ‘green’ pedestrian loop linking George Square and Blythswood Square with the planned riverside park and work to preserve historic buildings.

Drawn up by MVRDV and Austin-Smith:Lord, the proposal also suggests down-grading the M8 as part of a shift away from car traffic, paving the way for transforming more streets.

The document states: “The M8 can be downgraded to become part of a local city centre ring that accommodates displaced through-traffic from the city centre.

“Glasgow should use these three assets to change its ‘modal split’ to more sustainable modes of transport. By intelligently moving the car to the periphery of the city centre, and by creating a seamlessly integrated public transport and cycle network, the city will become more attractive, more liveable and it will attract new investments.

The framework is one of nine being produced for city centre districts. Councillors are expected to back the launch of a 10-week consultation, starting on December 6, at a meeting on Thursday.