The development of a major innovation district near Glasgow Airport has taken a significant step forward.

The Full Business Case for the Glasgow Airport Investment Area Project was approved by the Leadership Board at Renfrewshire Council this week. 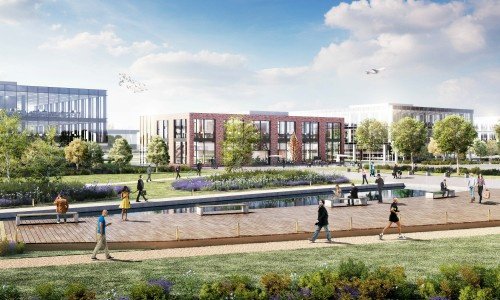 Also included is the re-alignment and upgrading of Abbotsinch Road - including 1620 metres of new road, a two-lane bridge over the White Cart linking the investment area to Westway business park and other development sites, a 100-metre cycleway and pedestrian bridge spanning the Black Cart as well as new and improved junctions, extensive active travel facilities and connections to existing cycleways and paths.

This infrastructure will bring almost 60 hectares of vacant and derelict land back into use, improve connections between the Westway, Inchinnan and Airport business parks and enable development of the Advanced Manufacturing Innovation District Scotland (AMIDS).

Significant work has already started to develop this district, which will capitalise on existing advanced manufacturing and engineering and research expertise in Renfrewshire and Scotland to drive sustainable growth.

Thousands of jobs are anticipated to be created through development of the district, which has already attracted the National Manufacturing Institute Scotland (NMIS) and the Medicines Manufacturing Innovation Centre (MMIC) to be located here.

Planning consent for the main infrastructure was granted in late 2017 and once considered by the Glasgow City Region Cabinet on 9 April, construction is scheduled to start this summer.

Renfrewshire Council leader Iain Nicolson said: “I am pleased that everyone across the council chambers recognises the significance of this project and has backed it. Construction of this new infrastructure will create the connections and conditions which attract major investment and brings thousands of new jobs to the region.”