Linthouse Housing Association has received the green light to build 49 homes on the site of a former primary school in Govan. 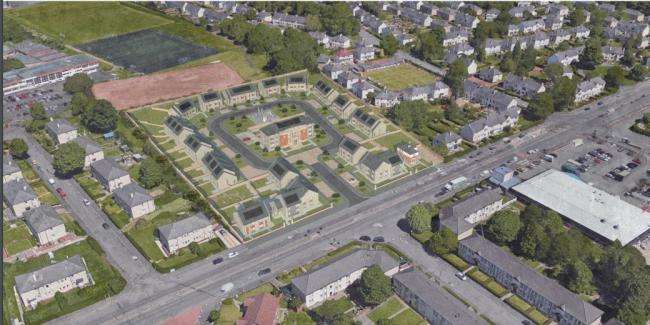 Planning permission was sought to demolish the majority of the existing school building at Shieldhall Road and to change the use from primary school site to residential development.

Under the plans, only the distinctive central entrance façade at the B-listed building will remain.

Drumoyne Primary School previously occupied the site but it closed in 2010 after merging with the neighbouring Elder Park and Pirie Primary to become Pirie Park Primary.

The original building was completed around 1931 and was altered in 1958. The school closed in 2010 and the structure is in poor condition following neglect and two deliberate fires.

A report by council planning officials stated: “The majority of the main building is in a poor state which is considered to be beyond economic repair or conversion.

“The proposal to demolish a substantial element of the main building and construct a new-build residential flatted building in its place has been considered along with Historic Environment Scotland and is considered to be the most appropriate strategy for the overall site.

“This proposal seeks to retain the central stone entrance façade which would serve as a landmark for the surrounding area with direct views maintained from Shieldhall Road to the south. The Shieldhall Road boundary walls and janitor’s house would also be retained and repaired.”

The report added: “Overall it is considered that the proposed layout, design, scale and massing of the various buildings on site takes account of the site’s context and setting and would contribute to a high-quality environment with a positive sense of place.”

Historic Environment Scotland said the building was of special interest because “it embodies some of the ideals of inter-war school design”.

But its response added: “Taking into account the location and condition of the building, and the fact that the proposal retains part of the listed structures, on balance we accept the principle of this proposal and do not object.”

Documents submitted by Grant/Murray Architects on behalf of the housing association stated:  “From early design stages it became clear that the existing building does not lend itself to residential development, for varying reasons. Principal amongst these was the existing building’s form and projected costs.”

The statement added: “Fundamental to the concept for the new-build option is the retention of the existing stone entrance façade to serve as a landmark for the surrounding environment.

“This façade is viewed as the most aesthetically important element of the existing structure and therefore will greatly enhance the design proposals.”

Glasgow City Council gave the move the go-ahead on July 29 subject to conditions.