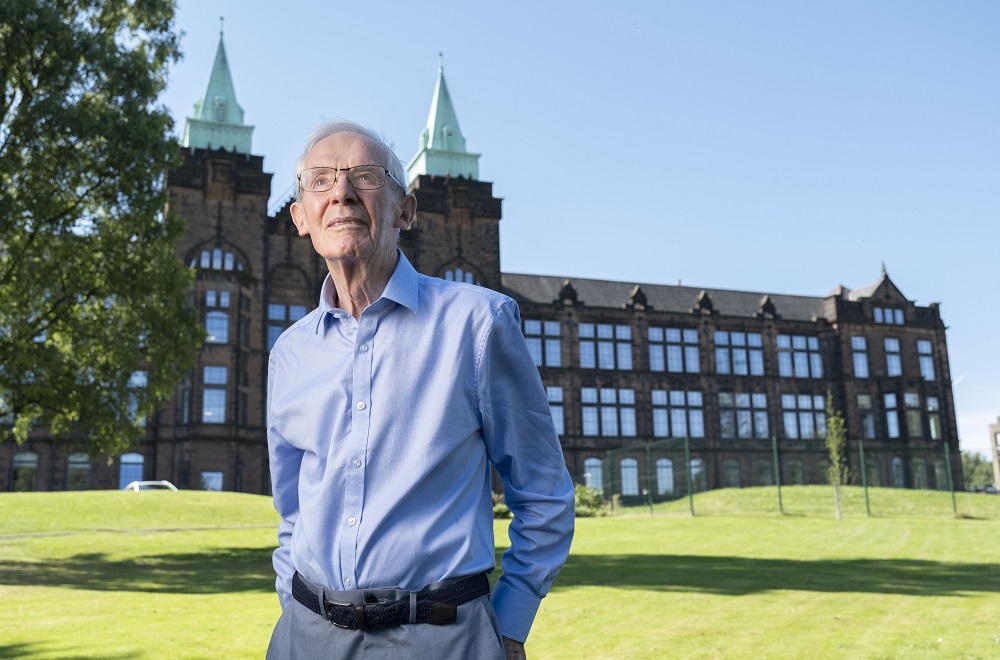 Standing at the floor-to-ceiling crittal style windows at the corner apartment of the iconic category B-listed David Stow building, looking out to the lush green parkland beyond, Dr Thomas Bone was reliving some of his most memorable moments as he visited his former office.

Although the view out to the perfectly maintained greenspace with the west-end cityscape in the background hasn’t changed too much since Dr Bone took on the prestigious role as Principal of Jordanhill College exactly 50 years ago, the inside of the main building has been completely transformed since his 20-year tenure ended in 1992 and is now a collection of bespoke apartments created by Cala Homes (West).

Formerly Scotland’s largest teacher training institution, Jordanhill welcomed many principals and students through its doors, then becoming the home of the Faculty of Education of the University of Strathclyde in 1992, until it finally closed its doors in 2012. 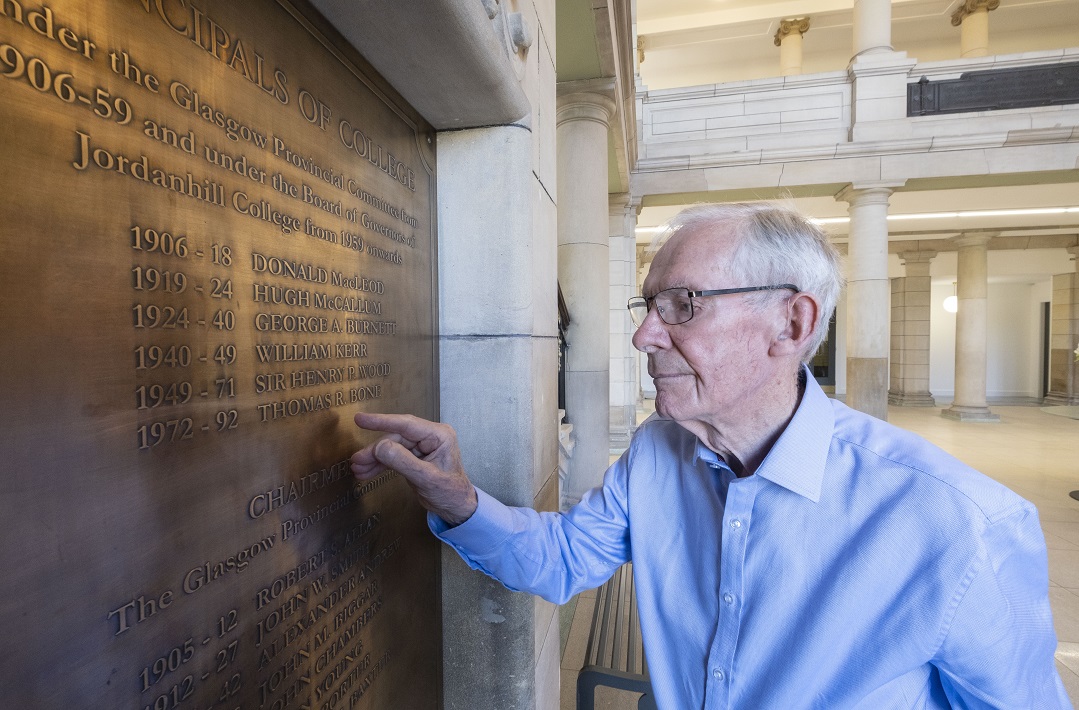 A plaque in the lobby of the David Stow building

Dr Thomas Bone is now the last living principal of Jordanhill College having served in the role from 1972 to 1992, following his predecessor, the renowned, Sir Henry Wood.

To mark the half-century milestone, Dr Bone returned to the David Stow building alongside his son David and daughter-in-law Georgina, who were able to step back into the former Principal’s office to see how it looks now and to reminisce over Tom’s twenty-year career which was based in that very room.

The three-bedroom apartment, which now sits where the Principal’s office was, has been purchased by west-end local Una Graham who was happy to welcome the Bone family into her new home to see the transformation. Una lives in the newly converted apartment with her two daughters and family dog, Charlie. 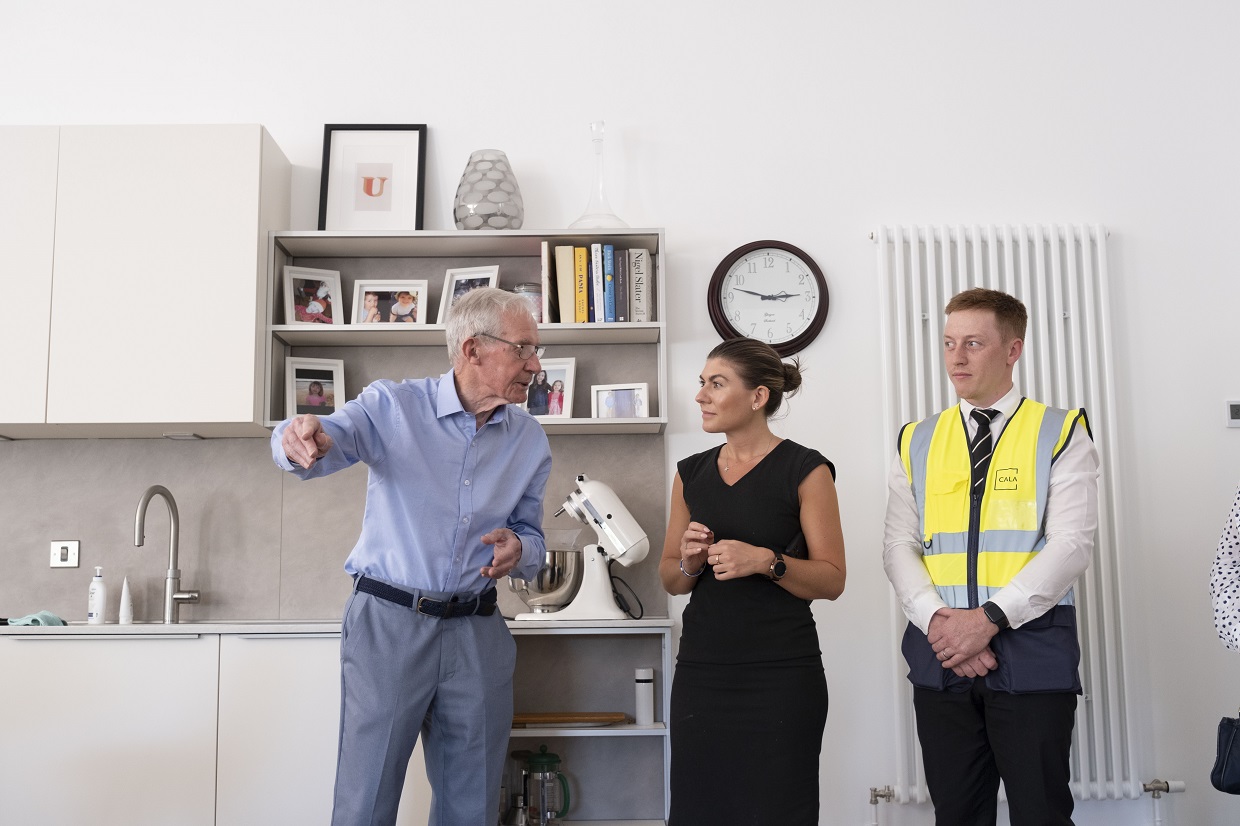 In the corner of the open-plan living area of the Graham family’s new home now sits a grand dining table where they often host family and friends. Formerly this was where the principal’s desk would sit where Dr Bone would hold regular meetings with key members of his team, and where applicants for posts were interviewed.

In contrast, the now light and spacious room which features a living area, dining area and kitchen, was once dressed with dark wood furniture.

In the grand lobby of the building, a restored plaque lists the Principals of College and Chairpeople of the Governors, with Dr Bone’s name visible as the final Principal of Jordanhill College before it merged with the University of Strathclyde, marking his place in the history of the building. 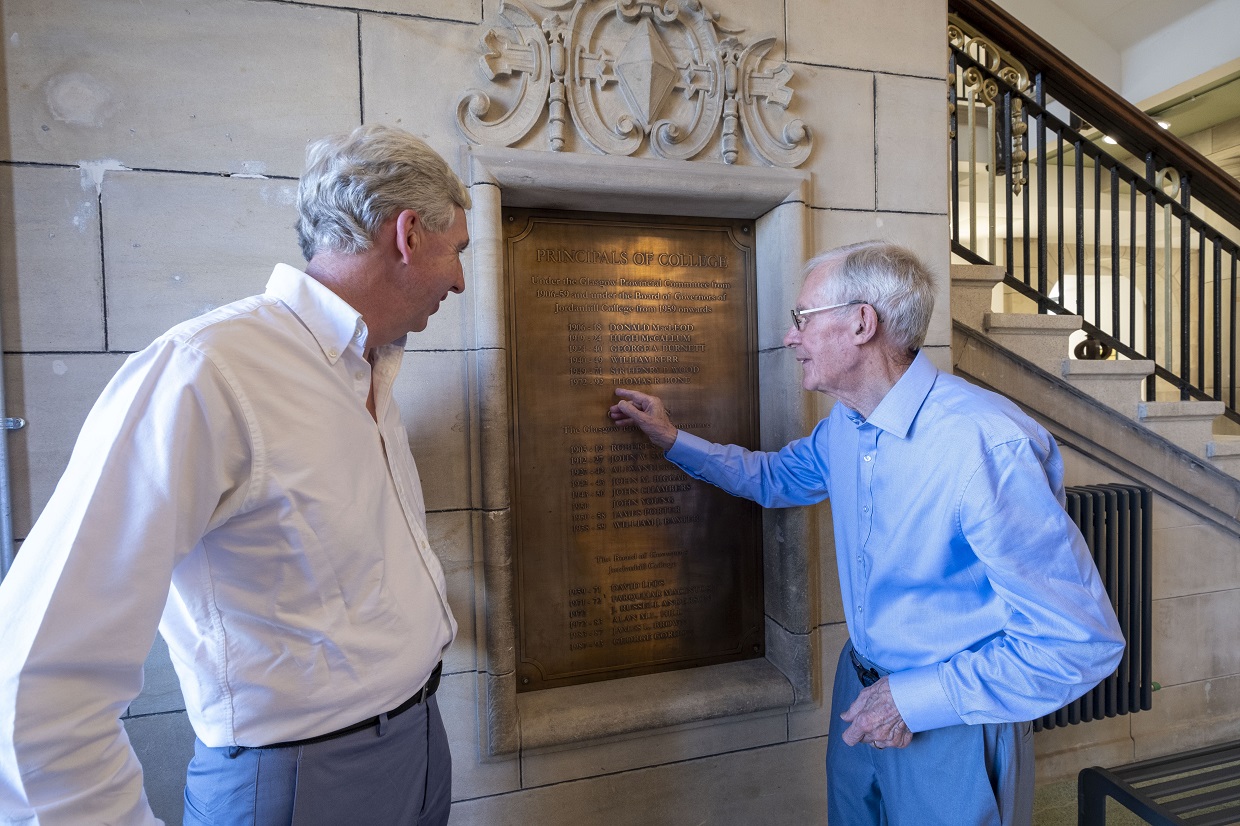 Dr Bone is the final Principal on the list

The David Stow building will be home to 64 apartments with phase three of the development set to launch sooner than planned due to popularity of the new-build apartments. It is part of Cala Homes (West) flagship development, Jordanhill Park.

Liana Canavan, sales & marketing director of Cala Homes (West), said: “Jordanhill Park, and in particular, the David Stow building, is a very unique project which we have had the pleasure of building and restoring.

“When Dr Bone got in touch initially with his wish to visit his former office, we instantly knew that we wanted to make it happen and our customer Una, who is the new custodian of the former Principal’s office, was incredibly accommodating in allowing this. It was truly special to see the history of the building and its future come together in one unique moment. 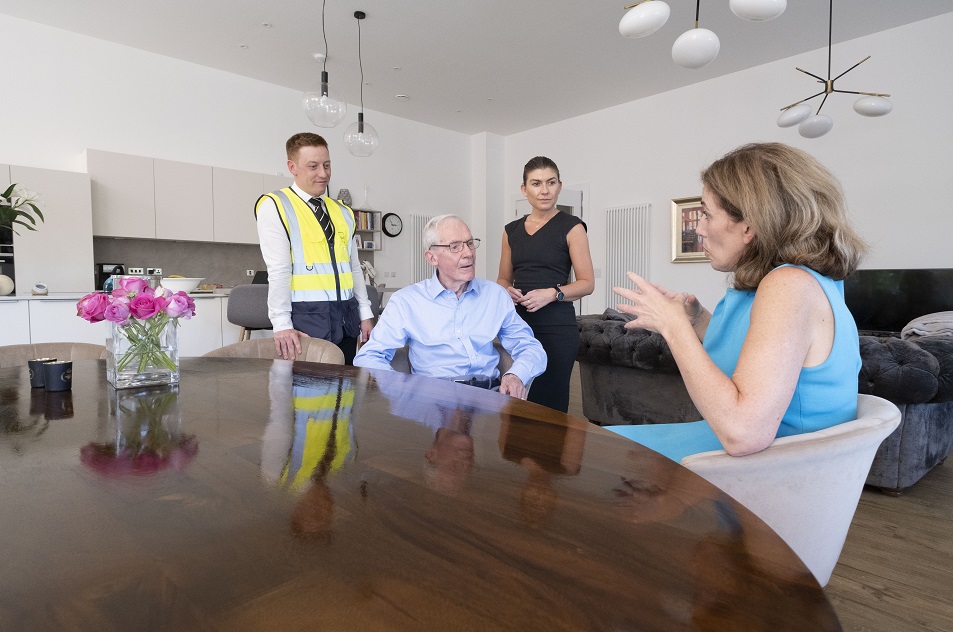 “It was heart-warming when Dr Bone and his family stepped back into his former place of work, especially the old office which holds many memories for him.

“We are proud to honour the history and heritage of the prestigious building whilst opening a new chapter for our residents who now call the building home.”

Dr Thomas Bone said during his visit: “Returning to the David Stow has brought back very welcome memories. It barely feels like it was 50 years ago when I took on the position of Principal. Those 20 years were some of the best of my career, I remember many times fondly not only in the office but the board room, the coffee room and the graduation hall. What made David Stow so special was the building was always so full of life and I am thrilled to see that - with Cala’s efforts – its vibrancy will carry on in a different guise. 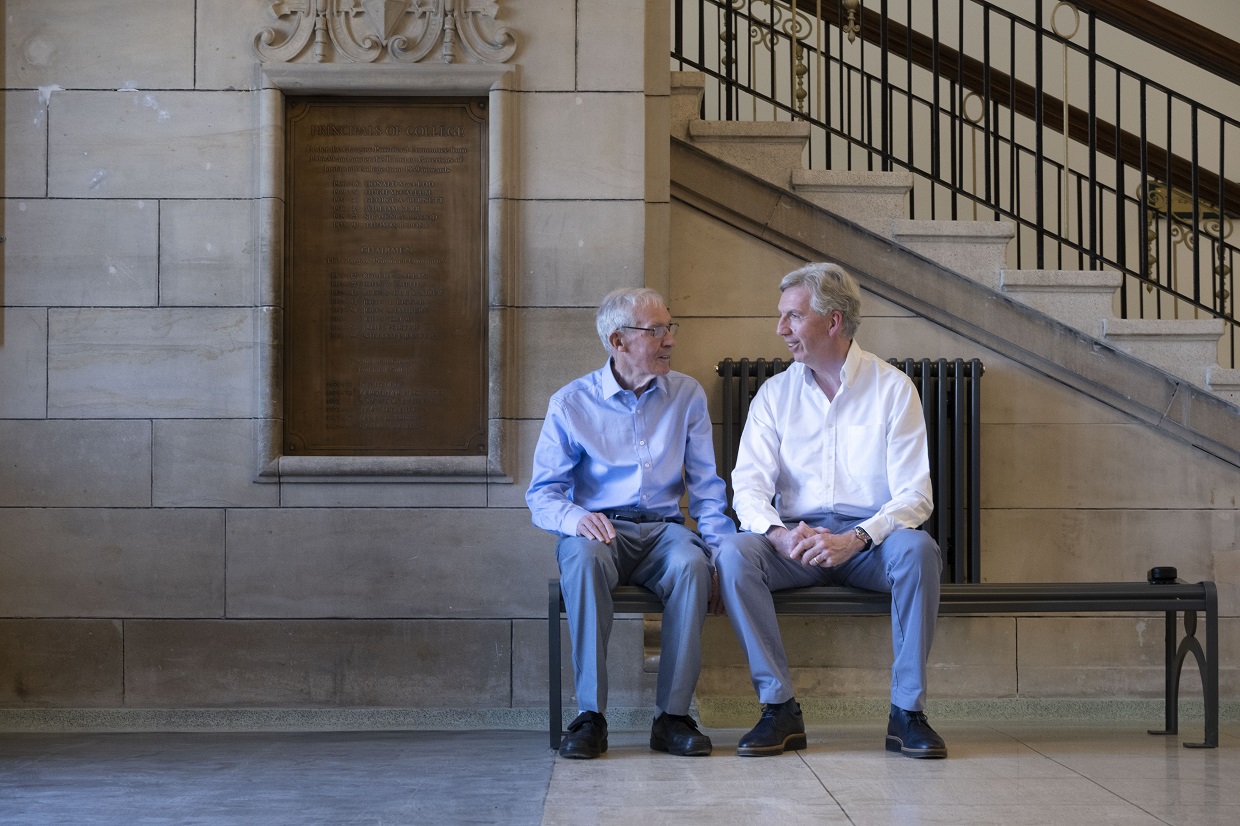 “It’s full circle to return and visit the office space and meet Una and her family. One of my granddaughters is following in my footsteps as she has recently qualified as a primary school teacher.”

New purchaser Una added: “It was a pleasure to meet and welcome Dr Bone into my new home. I feel honoured to live in such an important part of this amazing building which holds such dear memories, it’s not every day you get to meet a former tenant and learn so much about the interesting history of your new home.

“I feel very fortunate to have Dr Bone’s former office as my new family home, it’s very special and I’m delighted to have met the Bone family.” 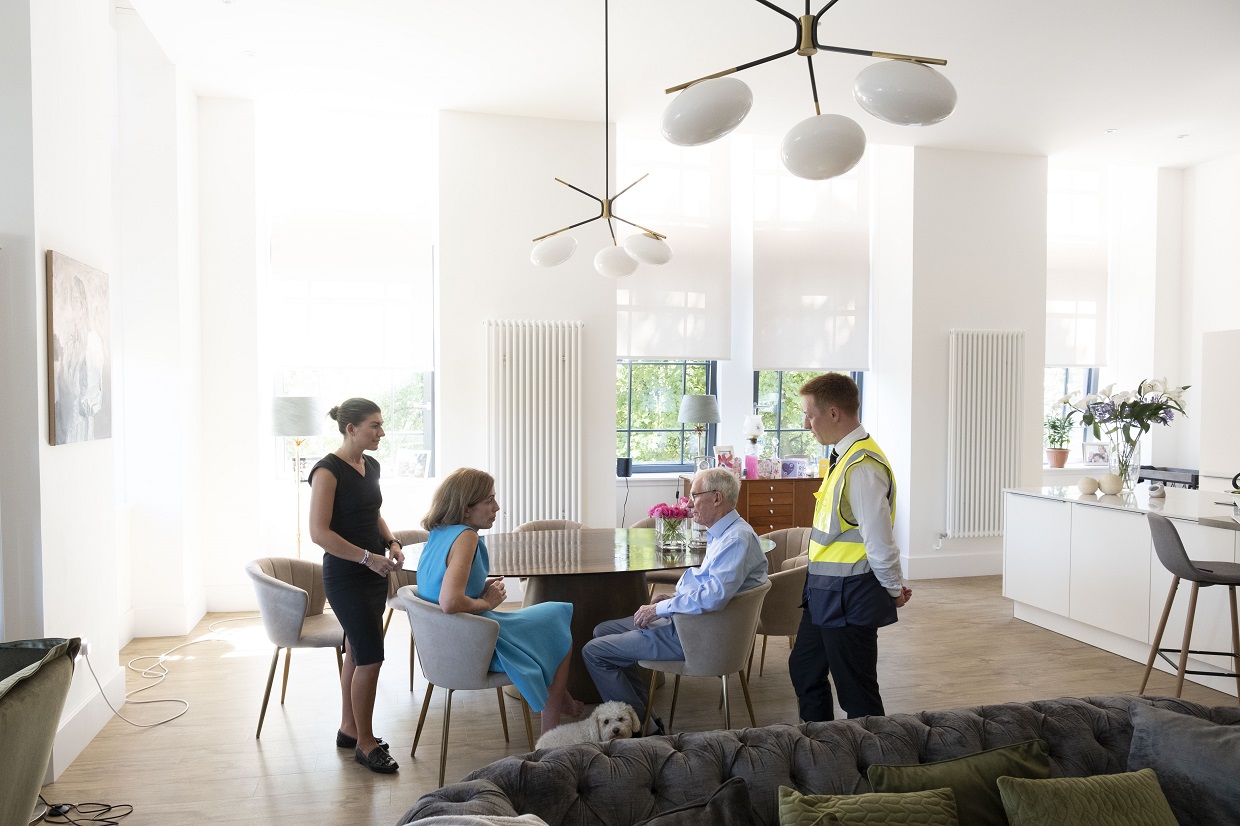 Following Dr Bone’s role as college Principal he went on to become a professor and Assistant Principal of Strathclyde University from 1992 to 1996. He had also been awarded a CBE honour from the Queen in 1988 for the work he had done in many important national committees and boards, often as chairman.

During Dr Bone’s visit Cala Homes (West) site manager Jordan Hughes and sales consultant Kim McFarlane also presented Dr Bone with an impressive painting of the David Stow building by Glasgow artist Robin Miller which had been gifted to the homebuilder at the beginning of the project.

Following the visit, members of the Cala Homes (West) team also revealed that an upcoming apartment building on the Jordanhill Park development, in which the David Stow building sits proudly, will be named ‘The Thomas Bone Building’ in honour of the last principal. This will be an upcoming phase expected later this year.