Kier has committed to a set of new pledges as it re-signed the Armed Forces Covenant. 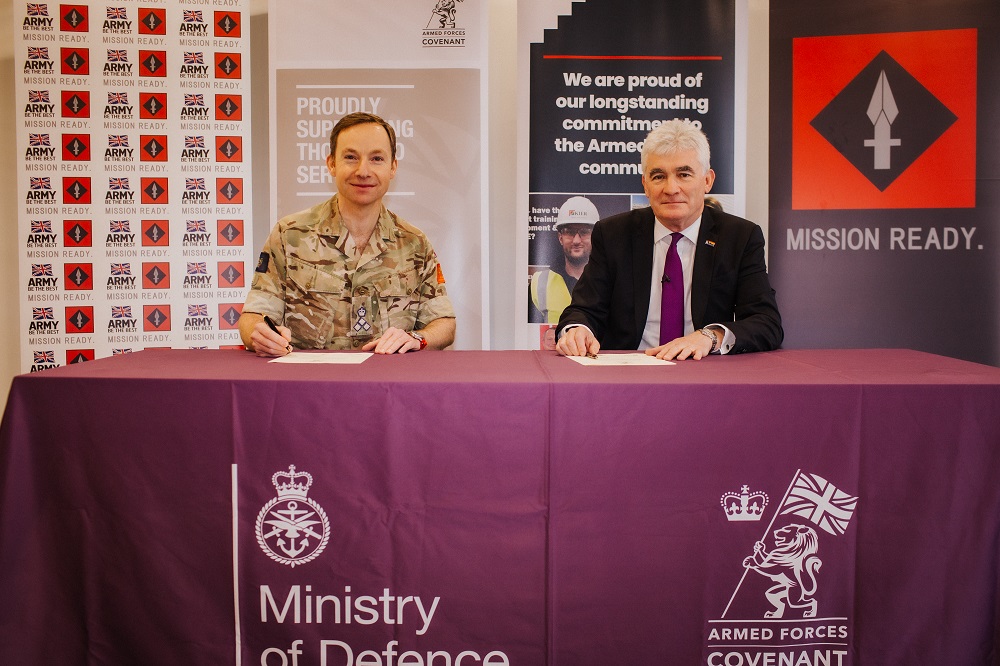 Andrew Davies, chief executive at Kier, and members of the company’s Armed Forces employee network were joined by Brigadier Eldon Millar from the British Army at Bassingbourn Barracks in Royston, Cambridgeshire – where Kier has been delivering a major refurbishment and new build programme – to sign the Armed Forces Covenant earlier this month.

As one of the first construction companies to sign the Armed Forces Covenant in 2013, Kier has a longstanding history of providing job and training opportunities for the Armed Forces community and remains committed to offering meaningful and sustainable employment. Working with the Career Transition Partnership (CTP) and Buildforce, today, employees hold a broad range of positions across Kier, from gritter drivers to health and safety managers, IT security specialists and managing directors.

Kier also has an Armed Forces employee network where people can come together, share stories and support one another.

Andrew Davies said: “I’m pleased to reconfirm our long-standing commitment to the Armed Forces and to supporting veterans, reservists and those with serving family members in the civilian workplace.

“Armed Forces personnel bring a fantastic set of transferable skills to our industry, the pledges we’ve committed to today will mean Kier continues to be a supportive workplace for those with a connection to the Armed Forces. As an inclusive company, it’s important everyone feels comfortable and can fulfil their potential, and re-signing the Armed Forces Covenant is an important part of this.”

Brigadier Eldon Millar said: “Kier has been an ardent supporter of the Armed Forces community for many years and I am delighted that this is set to continue following its resigning of the Armed Forces Covenant. With 12 new pledges, including Reservists and Cadet Force Adult Volunteers being offered additional leave to complete their training, it’s clear Kier understands and is committed to supporting the talent and skills that so many of our Armed Forces personnel possess.

“Organisations like Kier are paving the way for the Armed Forces community, providing meaningful employment, inclusive policies and a progressive culture that allows them to thrive.”

Earlier this year, Kier was also recognised and re-awarded Gold by the Defence Employer Recognition (ERS) scheme for its work with the Armed Forces community.