The Tomatin Trading Company is pressing ahead with plans to deliver its £12 million retail & leisure development at the Tomatin junction on the A9 following a landmark legal battle. 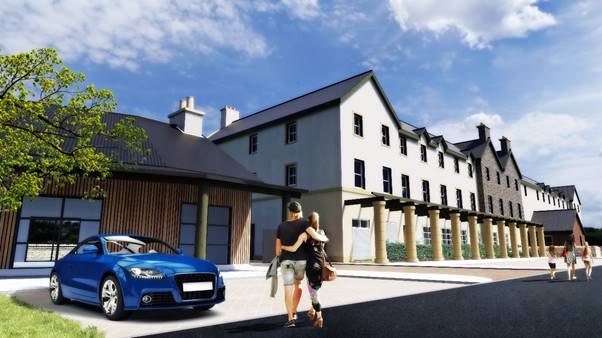 The venture, set to create hundreds of new jobs, plus increased footfall both directly and indirectly for the village of Tomatin and its surrounding area, can now use the name Tomatin Trading Company, after its landmark legal victory over Tomatin Distillery, which had objected to the use of the name Tomatin.

Consisting of a 99-bedroom hotel, a 200-seater restaurant, four retail units, a fuel filling station, and a farm shop, the development will showcase a range of local Highland food and drink suppliers.

Despite occupying a superb location for tourists and visitors between Aviemore and Inverness, the site at Tomatin, which previously housed a hotel, and latterly a café & filling station, has lain unused for well over a decade.

William Frame, the businessman behind the development, said: “We are delighted with the court’s verdict, and can finally, after a two year delay, look forward to kicking off this important development.

“In addition to ruling that there had been no trade mark infringement by the Tomatin Trading Company, the court ruled that the Distillery’s additional trade marks, registered in 2018, were invalid on the grounds of bad faith. This is an unprecedented ruling in Scotland, and the Court specifically noted in its judgement that cases in which bad faith is established are relatively rare. We proved on the basis of cogent and compelling evidence that the Distillery was in bad faith at the time it registered the 2018 Marks.

“Our focus now shifts to announcing our build team, together with finalising our financial team. We are keen to get started as soon as we can, and feel that we have assembled a unique and proactive team which will work collaboratively together.”

The centrepiece of the development – the 99-bedroom hotel - will be created using an innovative modular build technique.

The mix of full and part time managerial jobs in retail and hospitality roles will be created on the launch of the new Tomatin Trading Company, with more following as the development establishes itself as the default choice for tourists, bus tour groups, and business & commerce hotel customers.

Mr Frame added: “Never have the new opportunities, jobs and investment in this area been more needed as the economy looks to recover from the ravages of the Covid19 pandemic. Our development is an opportunity to create what’s known as a DIOR, a Destination in its Own Right, a high quality “stop off” of choice for both tourists and locals from all over the Spey Valley, Inverness, and the surrounding area.

“Earlier in the year we were delighted to hear that the Tomatin to Moy section of the A9 was to be dualled. This is fantastic news for tourism in this area as it will improve the local infrastructure, and attract yet more visitors.”