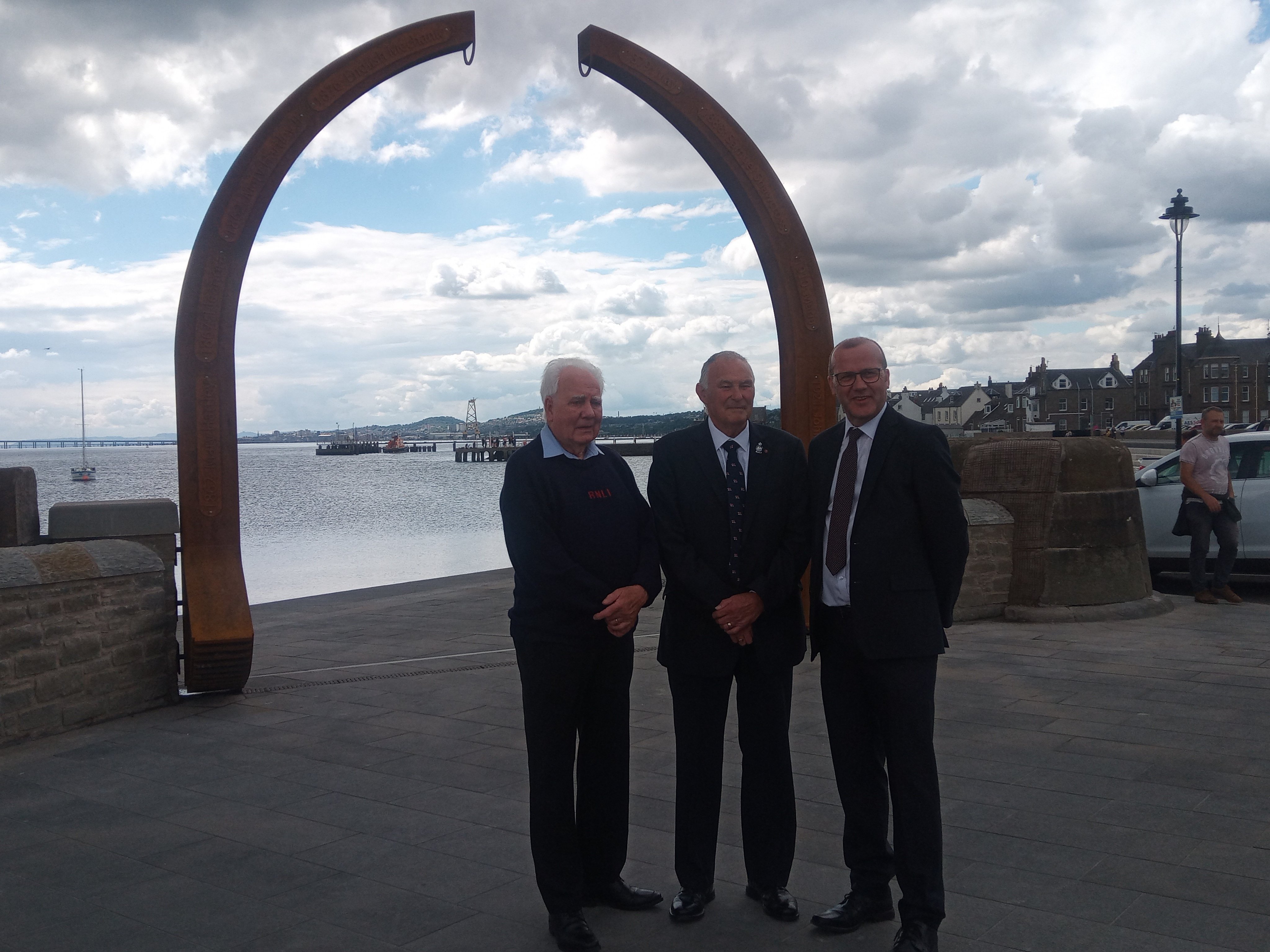 A new sculpture commemorating the lifeboat service has been unveiled as part of the multi-million-pound Broughty Ferry flood protection scheme delivered by McLaughlin & Harvey.

The public artwork, at Beach Crescent, takes the form of lifeboat davits, the arched cranes that hold emergency boats on larger ships, which create an archway framing a view towards the lifeboat station.

Among the VIPs on hand to help unveil the work, which also echoes the shape of the swans that are a regular feature of the area were Mark Flynn convener of Dundee City Council’s city development committee, Robin Smith MBE former crewmember of the lifeboat Mona and Peter Hay current coxswain of the Broughty Ferry lifeboat.

Cllr Flynn said: “It is crucial that we not only ensure effectiveness and value for money when delivering flood protection for our coastal communities but also that any scheme is attractive and in keeping with the buildings and streetscape around it.

“The inclusion of relevant and engaging public art is part of that process and I am delighted to see the sculpture unveiled in its context today for the first time.”

Peter Hay said: “It’s great to see not just the practical side of the scheme, which allows us as a crew better access to the lifeboat station, but also to see the work of the lifeboat in the Ferry down the years commemorated in such an outstanding way.”

The area’s first lifeboat was established at Buddon Ness in 1830, with the Broughty Ferry lifeboat station being opened just under 30 years later making it the first inshore lifeboat station in Scotland.

Since then 12 all-weather lifeboats have stationed there, each of which is named on the sculpture. The station currently has a Trent class all weather vessel, the Elizabeth of Glamis, aided by an inshore D class lifeboat called Oor Lifesaver, both of which are crewed by local volunteers.

As work on the £15.5 million Broughty Ferry Flood Protection scheme nears completion, the sculpture forms one of the final parts of the Scottish Government, Sustrans and Dundee City Council-funded project.

Work started three years ago with the specification and design produced by Dundee City Council’s in-house structural and civil engineering teams and the works delivered by McLaughlin and Harvey, as part of the Scape Group National Construction Major Works - UK framework.

Seamus Devlin, McLaughlin & Harvey civil engineering director, said: “We are proud to attend this official opening of our flood protection works at Broughty Ferry. There has been a significant transformation to the local area and we have particularly enjoyed seeing members of the public enjoying the new walkway.”

The scheme is designed to reduce the risk of flooding to residential, open space, community and businesses within Broughty Ferry, as well as boost active travel, through works along Douglas Terrace, James Place, Fisher Street and Beach Crescent.

A number of community benefits were built into the contract including the use of local suppliers and creating job opportunities for local people.

The sculpture was designed in-house by Dundee City Council, fabricated locally by Metaltech and installed by McLaughlin & Harvey.