New bridges, roads, cycling and pedestrian routes are all under construction at the Advanced Manufacturing Innovation District Scotland (AMIDS) in Renfrewshire and expected to be open in May 2021 as Wills Bros Civil Engineering delivers the infrastructure underpinning the development. 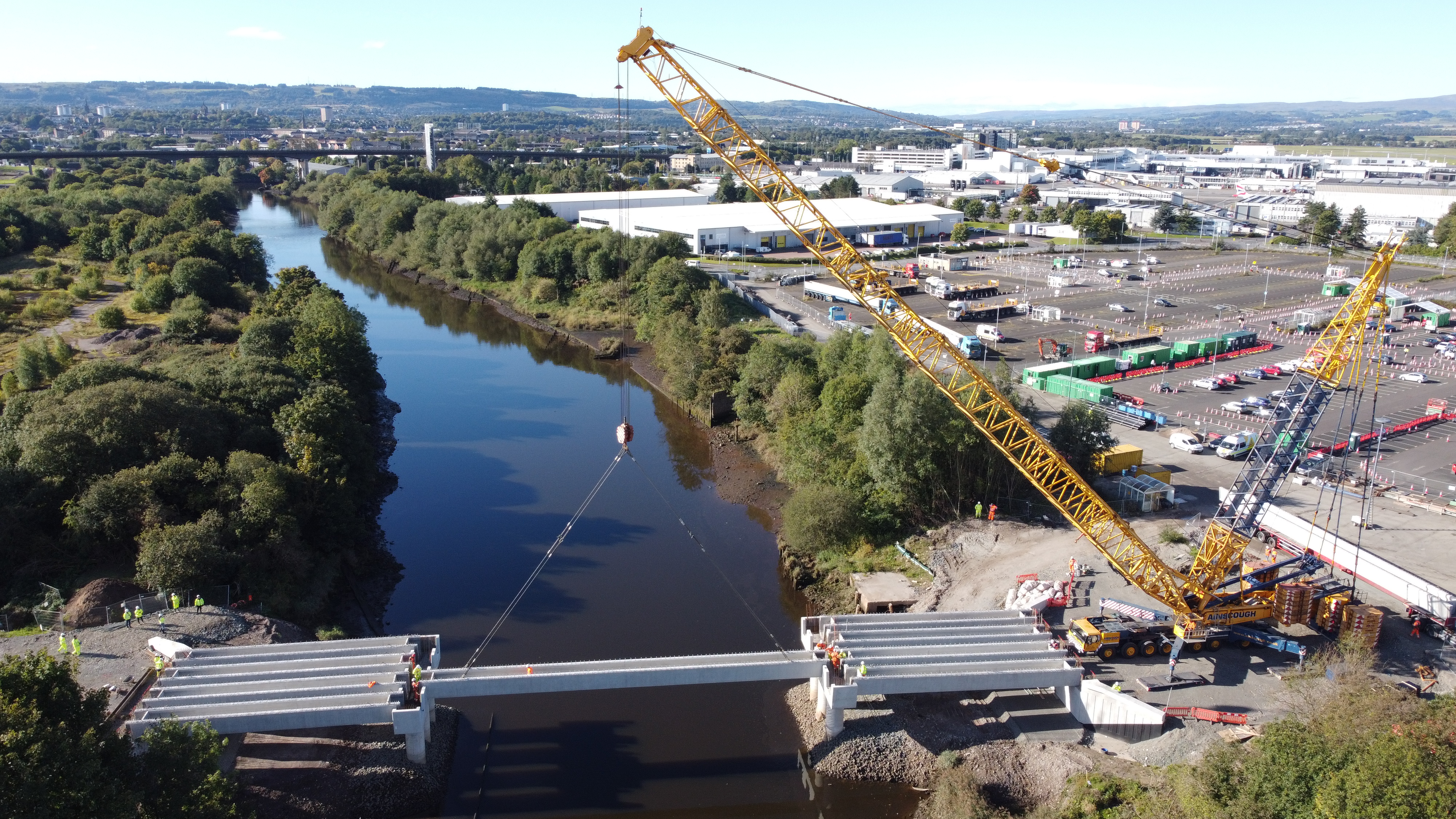 A link bridge at Wright Street hoisted into place

The Glasgow Airport Investment Area project is led by Renfrewshire Council and jointly funded by the UK and Scottish governments through the £1.13 billion Glasgow City Region City Deal.

Work on site was paused in line with government guidelines following the coronavirus pandemic, but restarted in the summer, achieving a 5-star COVID-19 Compliance rating, in recognition of the enhanced safety measures in place.

Twelve beams spanning 70 metres across the White Cart river were craned into position in September as part of a new two-lane link bridge which will connect commercial traffic to the district and reduce the number of HGVs in nearby residential areas.

Junction realignment at the Black Cart river has reached phase two and a new pedestrian and cycle bridge connecting Abbotsinch Road to Greenock Road is now on-site, ready for lifting into position in November.

A mile-long realignment of Abbotsinch Road is also well under way as the road is upgraded to take people through the 52-hectare site being redeveloped into Scotland’s centre for modern manufacturing.

It is being designed by the council to foster collaboration and promote a healthy working environment, with green spaces, a low carbon heating system, and scenic river cycling and walking routes all under development.

Construction is also scheduled to start this Autumn on both the National Manufacturing Institute Scotland (NMIS) and the Medicines Manufacturing Innovation Centre, the first facilities confirmed on site.

Aerospace company Boeing is also touching down in AMIDS at Westway Park as it researches metallic component manufacturing in an £11.8 million project with experts from the University of Strathclyde’s Advanced Forming Research Centre, part of NMIS. 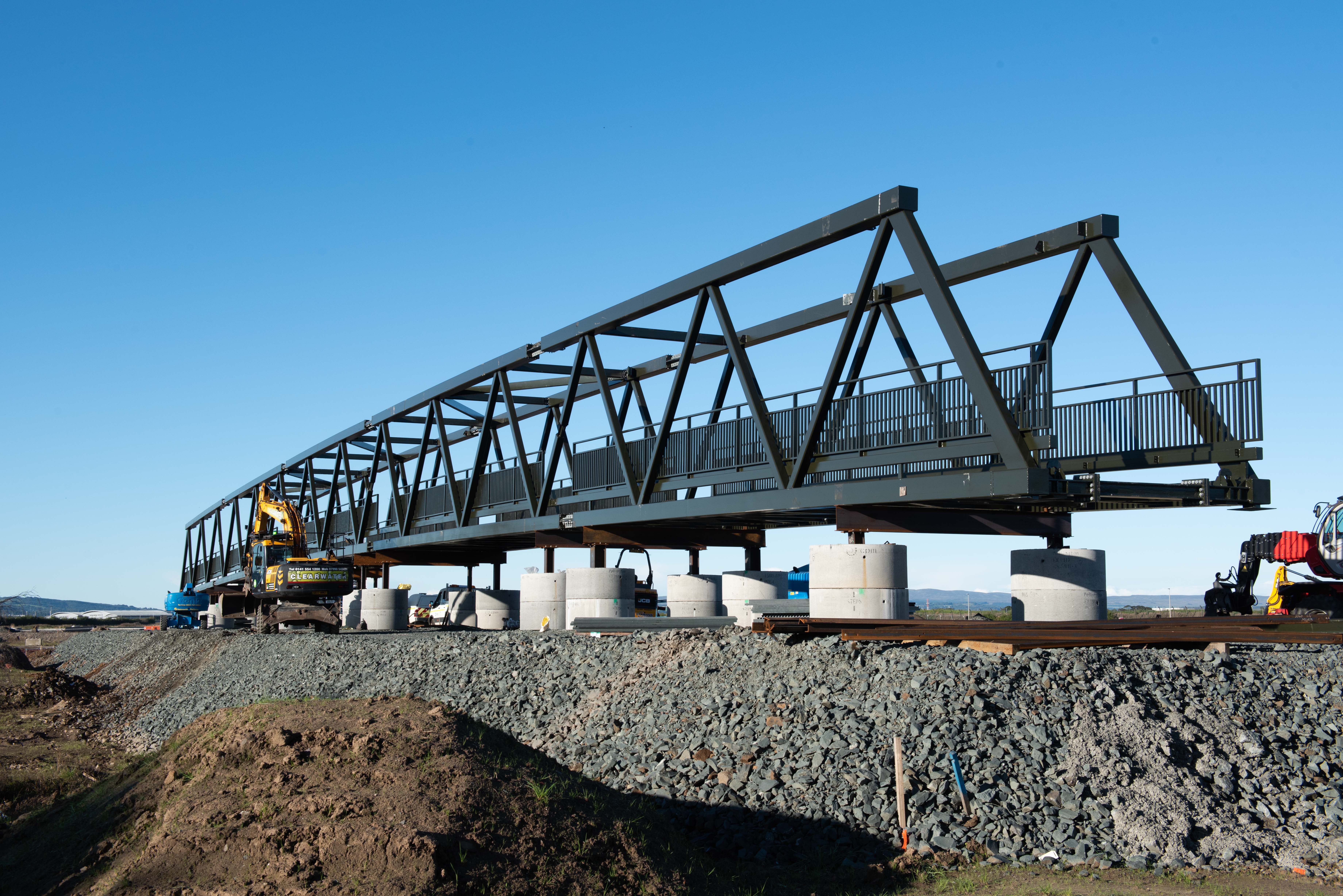 Renfrewshire Council leader Iain Nicolson said: “I am pleased to see the excellent progress being made on completing the enabling infrastructure for development of the Advanced Manufacturing Innovation District Scotland.

“Manufacturing is a hugely important sector to Renfrewshire, to the City Region and to Scotland. Development of the district will play a critical role in our economic recovery, creating thousands of jobs and supporting development of new clean, green ways of working.

“The District has already secured significant investment and I’m certain many more manufacturers will be attracted by the flexible development opportunities and the chance to grow their company, upskill their workforce and tap into the latest technologies at Scotland’s home for manufacturing innovation.” 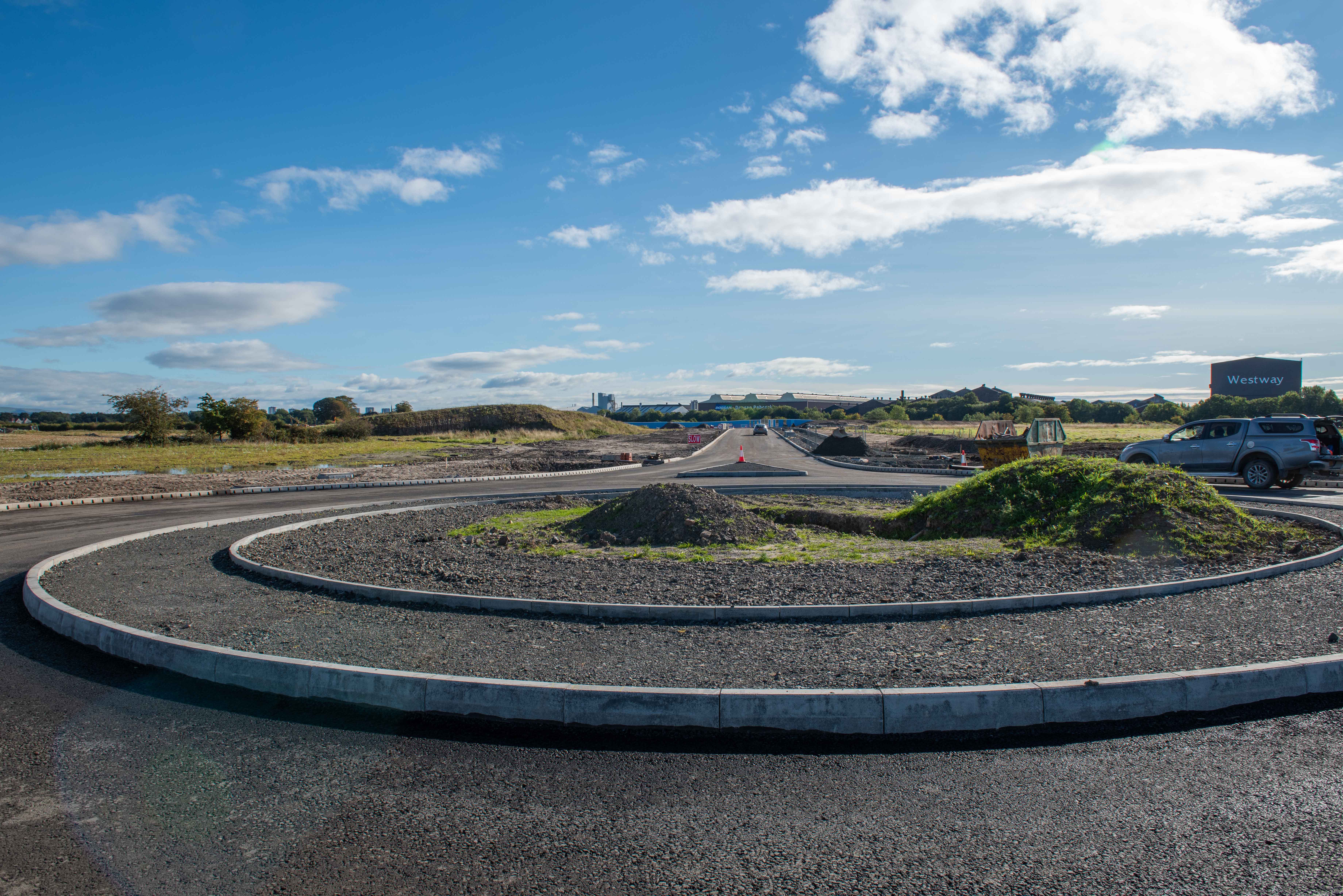 Cabinet secretary for transport, infrastructure and connectivity, Michael Matheson, said: “I am delighted to see such significant progress in delivering this transformative project, with the partnership between private and public sector working in a positive way to unlock a development that will result in sustainable and inclusive growth for the region.

“The Scottish Government is a full partner in the Glasgow City Region City Deal, contributing £500m over 20 years to the Infrastructure Investment Fund. The investment in this project through the Deal will contribute to the region’s economic recovery by creating jobs, and providing the commercial infrastructure to support and attract businesses to the Renfrewshire area.”

UK Government minister for Scotland Iain Stewart said: “I am delighted that the Glasgow Airport Investment Area project is forging ahead. It is vital that we build back better with upgrades to our bridges, roads, cycling and pedestrian routes and support new jobs and businesses in advanced manufacturing.

“The UK Government is committed to levelling up all parts of the country and our £523m investment in the Glasgow City Region Deal is an important part of that. Across Scotland we are investing £1.5bn in growth deals to create jobs and boost local economies.”