Planning in principle sought for 1,200-home mixed-use development in Glasgow

Proposals to deliver four new villages of around 1,200 homes on the north eastern edge of Glasgow have reached the planning stage. 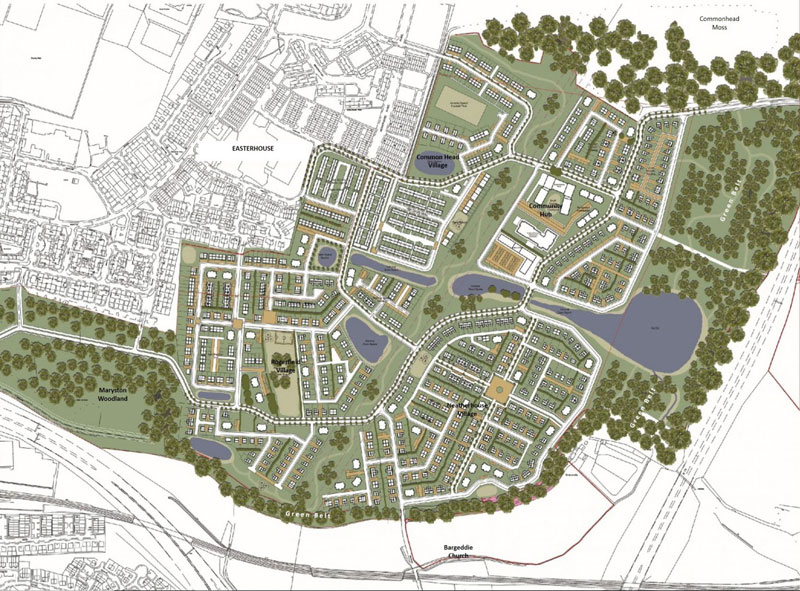 A proposed masterplan drawn up by Manor Architects

The plans by Capper Farm Enterprises is for land between Easterhouse and the M73 motorway, which has been designated as part of a Community Growth Area in the Glasgow City Development Plan. A draft masterplan has already been agreed by Glasgow City Council.

The developer said that it wants to build homes that cater for all ages in the population, with a mix of tenancies and home ownership.

The number of homes proposed for the 75-hectare Heatheryknowe site has been reduced by around 300 following community consultations last year.

There would also be a 120-bed care home, a children’s nursery and 900 square metres of commercial space.

The developer said in a planning statement: “The current demographic for the Greater Easterhouse area shows a relatively young population.

“The housing will be delivered over a lengthy period and the intention of the masterplan framework is to ensure that all ages are catered for in terms of housing opportunity.

“The intention within the Community Growth Area is that the development should be communityfocused and deliver a range of tenancy types for a wide spectrum of the population.”

In a design statement, the applicant said: “The site is on the eastern boundary of the city, adjacent to North Lanarkshire, a strategic location with substantial green network buffers to the north, south and east.

“There are strong public transport connections into the city centre, also via the M8 motorway.

“A key feature of the site is the accessibility to significant areas of usable public open space, including the Seven Lochs project area to the north and Drumpellier Country Park to the north east.”

A document submitted with the application for planning permission in principle added: “It is proposed to retain the existing steading at Heatheryknowe, together with the adjacent farm buildings, and develop a commercial centre incorporating small commercial, business units and childcare facilities.

“The mature trees adjacent to the site will be retained as they add to the amenity value of the setting and are an important aspect of local identity. The existing Heatheryknowe Road will be used as a pedestrian/cycle link to the commercial centre.

“Existing vistas along Netherhouse Road towards the listed Bargeddie Church spire will be protected. Trees that are a significant feature in the landscape will also be protected.

“A 10-metre buffer will be provided adjacent to the mature woodland beside the motorway and adjacent to the Monklands canal. Provision will be made for access alongside the Canal to facilitate an industrial heritage trail, interpretation and recreational activity.”