New Gorbals Housing Association has teamed up with Page\Park Architects to submit designs to create a pedestrian link between two Glasgow communities by opening up a railway arch. 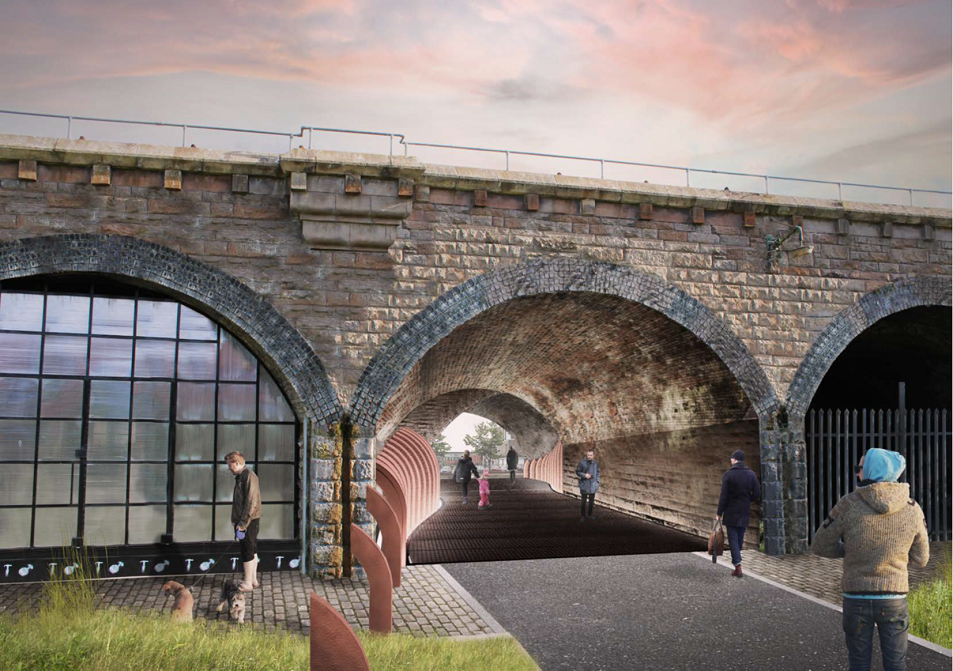 Arch 12 view through to Hutchesontown

The route is proposed between Laurieston Road and Cleland Lane and would be part of a phased project aimed at improving pedestrian connections and public realm in the area, including turning adjacent greenspace into a park and reducing the width of four-lane Laurieston Road.

Acting alongside Network Rail, which has planning permission to introduce commercial uses to a set of arches at Cleland Lane, the latest proposal would establish an east-west link to Gorbals Street, augmented at a later date with new paving and street crossings.

A design statement lodged with Glasgow City Council states that New Gorbals Housing Association and other interested organisations have identified the railway viaduct and the greenspace in front of it, reaching to Gorbals Street, as “an area of opportunity for redevelopment” into a civic space with a link created to connect the otherwise severed communities of Laurieston and Gorbals.

It continues: “A longer term ambition beyond this planning application is also being explored; to improve the landscape setting on Gorbals Street, consider the relationship with the Citizens Theatre to the north, and with input from traffic engineering consultants, introduce a new pedestrian crossing, as well as make improvements to the existing pedestrian crossings at Laurieston Road with a view to re-establishing transport routes in a more progressive, people-first manner.

“While the project ambition extends beyond the opening of the railway arch, it is seen as a critical first step in the transformation of the people movement network and establishment of a thriving community setting.”

The document adds: “The overarching ambition for this project is to connect the neighbourhoods of Laurieston and Hutchesontown by re-imagining the railway viaduct as a ribbon of activity for community and commerce, rather than a barrier that divides.”

Linda Malone, chairperson of New Gorbals Housing Association, told our sister publication Scottish Housing News: “We are excited for work to begin on this project, as redeveloping these railway arches will have such a positive impact for local residents and for Gorbals Street. The overall intention of this project is to connect the neighbourhoods of Laurieston and Hutchesontown.

“We plan to do this by transforming the railway viaduct, currently a barrier, into a focal point of activity for these communities. This first phase includes the creation of a new connection between these neighbourhoods by opening up one of the arches to provide a striking new walkway that will create a direct pedestrian route to the amenities and public spaces on each side of the viaduct.”

In a statement, Page\Park wrote: “Arch 12 has been identified as the ideal arch to open up as part of these public realm improvement proposals, as it sits perfectly aligned with the public piazza at NGHA offices on Crown street, and emerges in the middle of Cleland lane.

“This creates a very direct and legible pedestrian through route to connect these public spaces and adjacent neighbourhoods of Laurieston and Hutchesontown. The arch itself sits at the splitting point of the two railway lines above, meaning it consists of two different intersecting vaulted arches. This creates a dog-leg step in plan, where the two arches are slightly offset.”

The intention is to start the first phase of work early this year, subject to planning approval.