Plans for a multi-million-pound waterfront development at the western end of the Kirkcaldy Esplanade have been rejected by Fife Council. 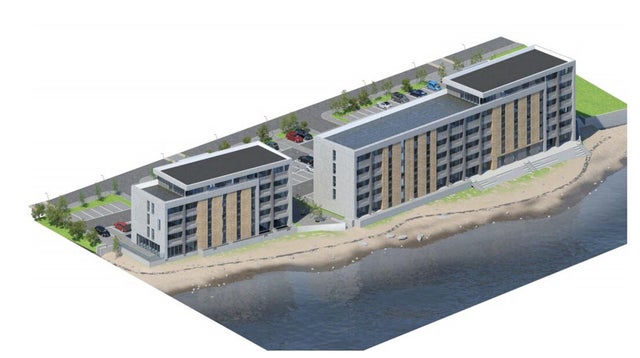 The plans for 55 flats and units for commercial use were rejected as councillors on the central and west Fife planning committee claimed it would have an adverse effect on local schools provision, which does not currently have sufficient capacity for such a development.

Broughty-ferry based developer Grant Road Properties submitted the plans for the three blocks of flats and commercial units. The firm intended to build the units at a vacant site to the south east of the Morrisons supermarket on Kirkcaldy Esplanade, next to Seafield Beach.

A lack of measures to promote the use of sustainable transport, the impact on existing road infrastructure, the shortfall in communal car parking spaces and absence of electric vehicle charging points were also key concerns of the council.

Councillor John Beare said the proposal had few, if any, redeeming features, adding the design was more akin to a commercial development than a residential one.

Grant Road Properties argued the residential-led mixed-use development would act as a “catalyst” for wider redevelopment and urged councillors to back the plan, The Courier reports.

The firm added: “The development has been carefully designed in response to the site’s immediate context and the surrounding townscape in this part of the town and provides a new urban block with appropriate scale, massing and quality of materials.”

Alistair Cameron, Kirkcaldy central councillor, was looking to have the decision deferred to a later unspecified date. He also highlighted that the lack of school places in the area was effectively halting any regeneration of the site when the town most needed it.

He said: “While the application had many faults it was also represented a key element to the redevelopment at the entrance to Kirkcaldy. Fife Council’s education department telling us that should the application be accepted construction should be delayed until 2026 is simply unacceptable.

“We have to find a way round this in a time when there is a desperate need for homes and for jobs in the town.”

Councillor Mino Manekshaw voiced similar concerns. He said that the lack of school provision effectively declared a “development blight” for that area of Kirkcaldy.

He added: “We have to work out a way of educating our children without stopping development.”