Full design proposals have been revealed for an office development in Glasgow’s International Financial Services District which gained Planning in Principle last year. 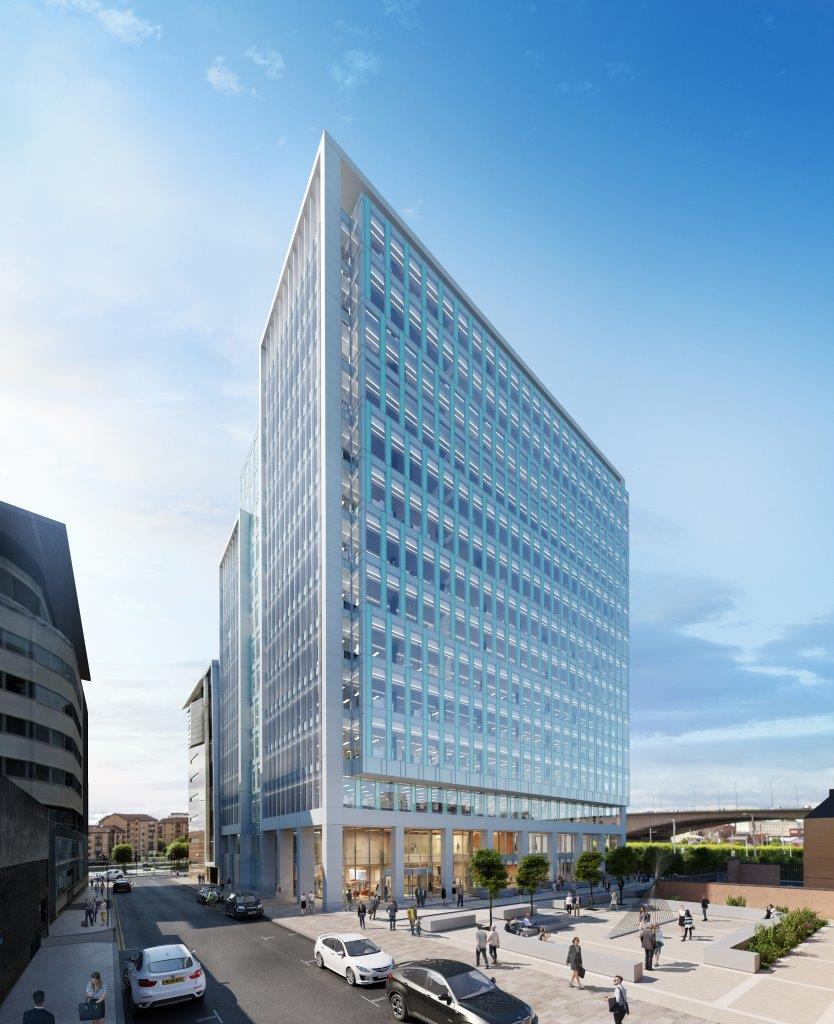 Property developer Soller Group has submitted a detailed planning application for its 200,000 sq.ft. Carrick Square office development, which it said represents a new phase in the masterplan to revitalise the Broomielaw.

Designed by Glasgow-based Mosaic Architecture + Design and located between Brown Street and Carrick Street, Carrick Square will comprise 14 floors with panoramic views across the River Clyde and the City. Also included are a large roof terrace and a new landscaped public realm linking Brown Street and Carrick Street, incorporating a plaza and garden for use by both occupiers and the general public.

Designed in a ‘U’ shape to maximise natural light on a site that is currently used as a car park, the development will bring new vibrancy and infrastructure to the Broomielaw, as well as delivering much-needed Grade A space to Glasgow’s limited development pipeline. Offering column-free floorplates, extensive bike parking facilities and a double-height entrance foyer, the building will be just minutes’ walk from Glasgow Central train station as well as bus and subway routes.

Nick Treadaway, founder and CEO of Soller Group, said: “By submitting our reserved matters application for Carrick Square having had outline planning agreed, we hope to be a step closer to bringing in-demand Grade A office space to Glasgow City Centre.

“Whilst clearly development across the world is currently paused, we are very optimistic that resilient and forward-thinking businesses will thrive again and continue to look for top-class space in one of the UK’s most vibrant cities. With Glasgow’s development pipeline tightly constrained, the need for ambitious world-class office space, will be paramount in the drive to bring new investment and occupiers to Glasgow.”

Neil Haining, director of Mosiac Architecture + Design, added: “Our proposed design for Carrick Square responds to Soller Group’s vision for world-class business space that will act as a catalyst for the regeneration of the Broomielaw area, whilst respecting the heritage and affection that surrounds the Clydeside. Key to our proposal is a new carefully-considered public plaza joining Brown and Carrick Streets with the new main entrance and providing much needed public green space to the area.

“The massing of the building has been sculpted in response to the immediate context of the site, the stepped south facade creates the opportunity for large external terraces with unique southern aspects from the building.”