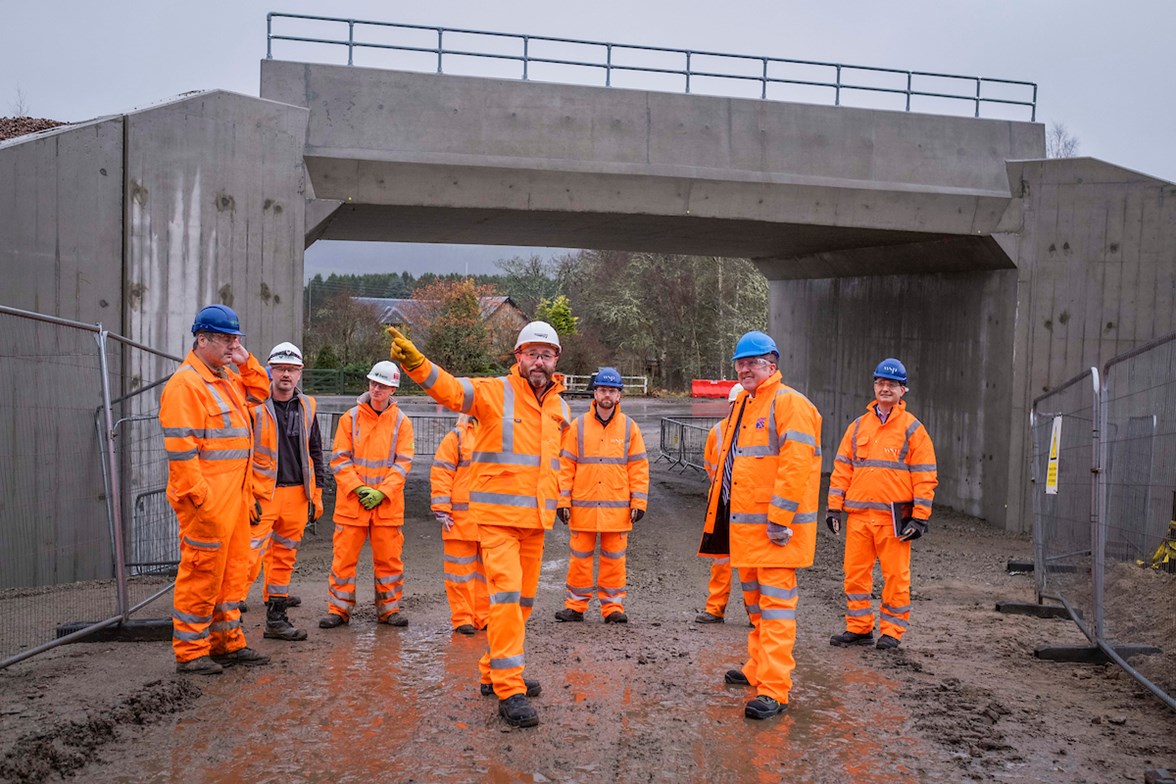 Transport Scotland anticipate that the construction contract for the third section of the A9 Dualling will be awarded in the second half of 2022.

Mr Dey said: “The announcement of the shortlisted contractors today maintains momentum and shows further progress on the Scottish Government’s commitment to dual the A9.”

The announcement was made during a visit to the first major structure to be constructed as part of the A9 Dualling: Tomatin to Moy project.

Time-lapse footage released by Network Rail, on behalf of Transport Scotland, reveals the demolition of the original 1884 masonry arch rail bridge at Lynebeg, near Inverness, followed by the successful installation of the new structure during a 78-hour possession of the Highland Mainline.

He said: “The success of the Lynebeg rail bridge installation marks a significant milestone for the A9 Dualling: Tomatin to Moy project, as the first tangible improvement to the transport infrastructure as part of the project’s advance works.

“Not only is this new structure safeguarding and improving connectivity on Scotland’s Highland Mainline, these works will help to deliver the ongoing A9 Dualling programme and will enhance the local infrastructure for the benefit of the surrounding communities.

“I would also like to thank all passengers whose travel plans were affected by these works and the local community for their patience during the construction of the new bridge.” 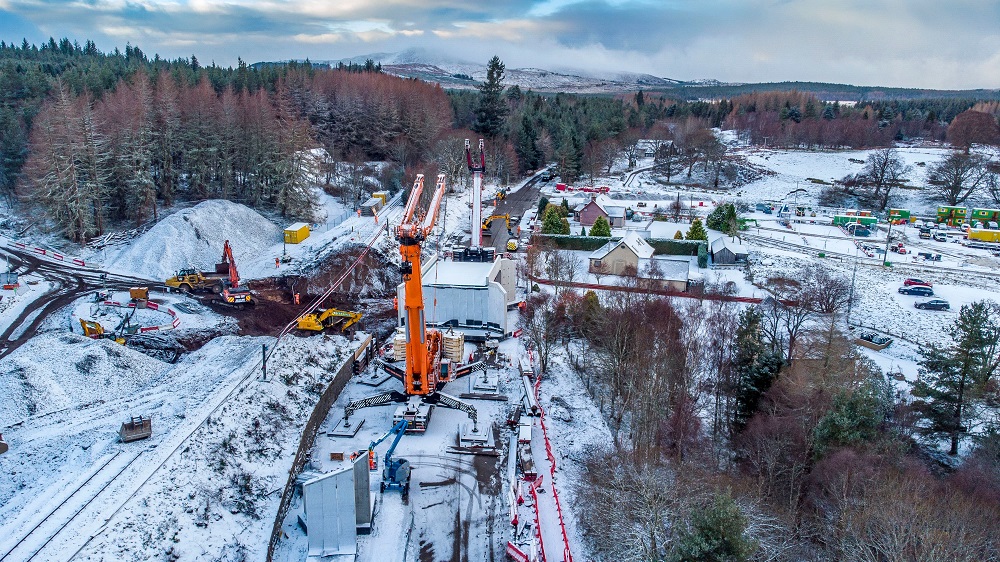 In addition to the new rail bridge, further advance works for the A9 Dualling: Tomatin to Moy project are expected to commence in early 2022 and will see the creation of a new non-motorised user route (NMU) which will initially facilitate local access to a new bus layby and shelter on the B1954.

The NMU route, which will be further extended as part of the main A9 Tomatin to Moy dualling project, will encourage active travel, improve connectivity and safety for those living in the surrounding communities, and will remove the need for local people to cross the A9.

The completion of the bridge replacement at Lynebeg rail bridge marks a significant milestone in the progress of the A9 Dualling: Tomatin to Moy project and has been the culmination of years of meticulous planning and preparation with Network Rail, its contractor BAM Nuttall, Atkins Mouchel Joint Venture and Transport Scotland.

The video footage shows the demolition of the existing bridge the complex engineering challenge of moving the new bridge, which was constructed on site near to the Highland Mainline, sliding the bridge into position and relaying of the track, before commencing the backfill operations.

The railway was closed between 23:20 hours on Friday 26 and 05:40 hours on Tuesday 30 November as programmed, in time for the first train crossing the bridge on Tuesday morning. Works will continue on site for several weeks to complete the new structure, including cladding the concrete wing walls with the recovered stone from the original stone arch bridge which was constructed as part of the Highland Mainline in 1884. 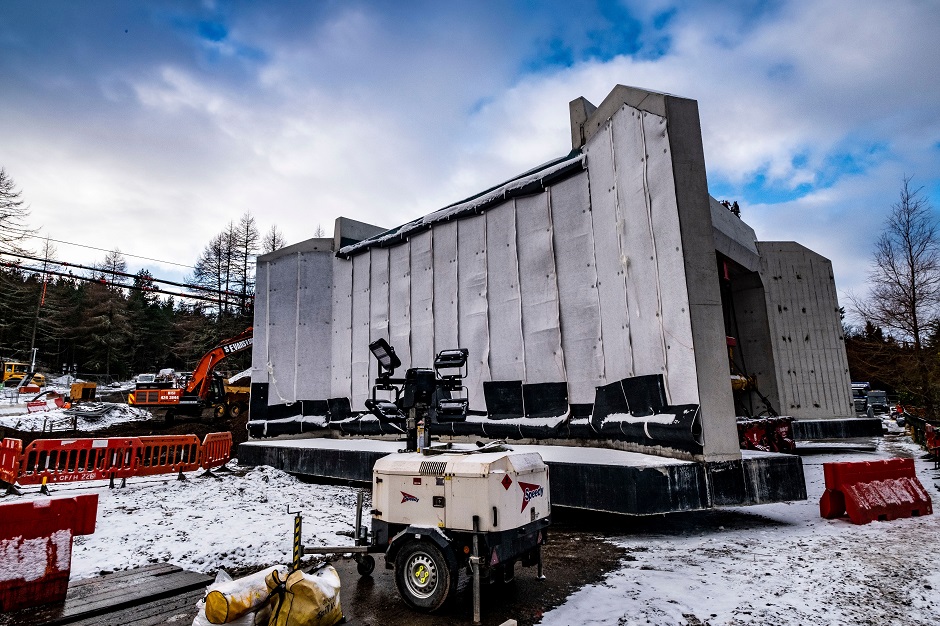 Billy McKay, Network Rail’s programme manager for the Lynebeg bridge replacement works, said: “The installation was complex due to requirement to remove the existing railway infrastructure including cabling, track and the embankment, before the concrete bridge could be pushed into its final position. And all against the clock due to the need to reinstate and re-open the line to traffic at the end of the possession.”

The construction team used a Self-Propelled Modular Transporter (SPMT) system to carry the structure from the site compound, where it was constructed offline over a 10-week period, before manoeuvring the massive 660-ton structure several hundred meters along the B1954, and sliding it to its final position.

Nick Conroy, project manager for Transport Scotland, said: “This successful operation to replace Lynebeg Railway Bridge is the culmination of many years of intricate planning, detailed engineering, and consultation with key stakeholders, and is a credit to the teams involved.

“We’re delighted that the first major milestone on the A9 Dualling: Tomatin to Moy project has been achieved and we look forward to many more key milestones in the months ahead.”

The successful construction of the new Lynebeg rail bridge and announcement of shortlisted contractors to dual the A9 comes just days after Transport Scotland published Made Orders for a further two schemes - Tay Crossing to Ballinluig and Pitlochry to Killiecrankie, completing the statutory process to identify the route to upgrade the A9 at each location.