Designs unveiled for ‘landmark’ footbridge over Forth and Clyde canal

Plans have been submitted for a new footbridge over the Forth & Clyde Canal set to permanently link three communities in the north of Glasgow for the first time since the waterway opened in 1790.

The new Stockingfield Bridge will provide a new traffic-free link between the communities of Maryhill, Gilshochill and Ruchill. 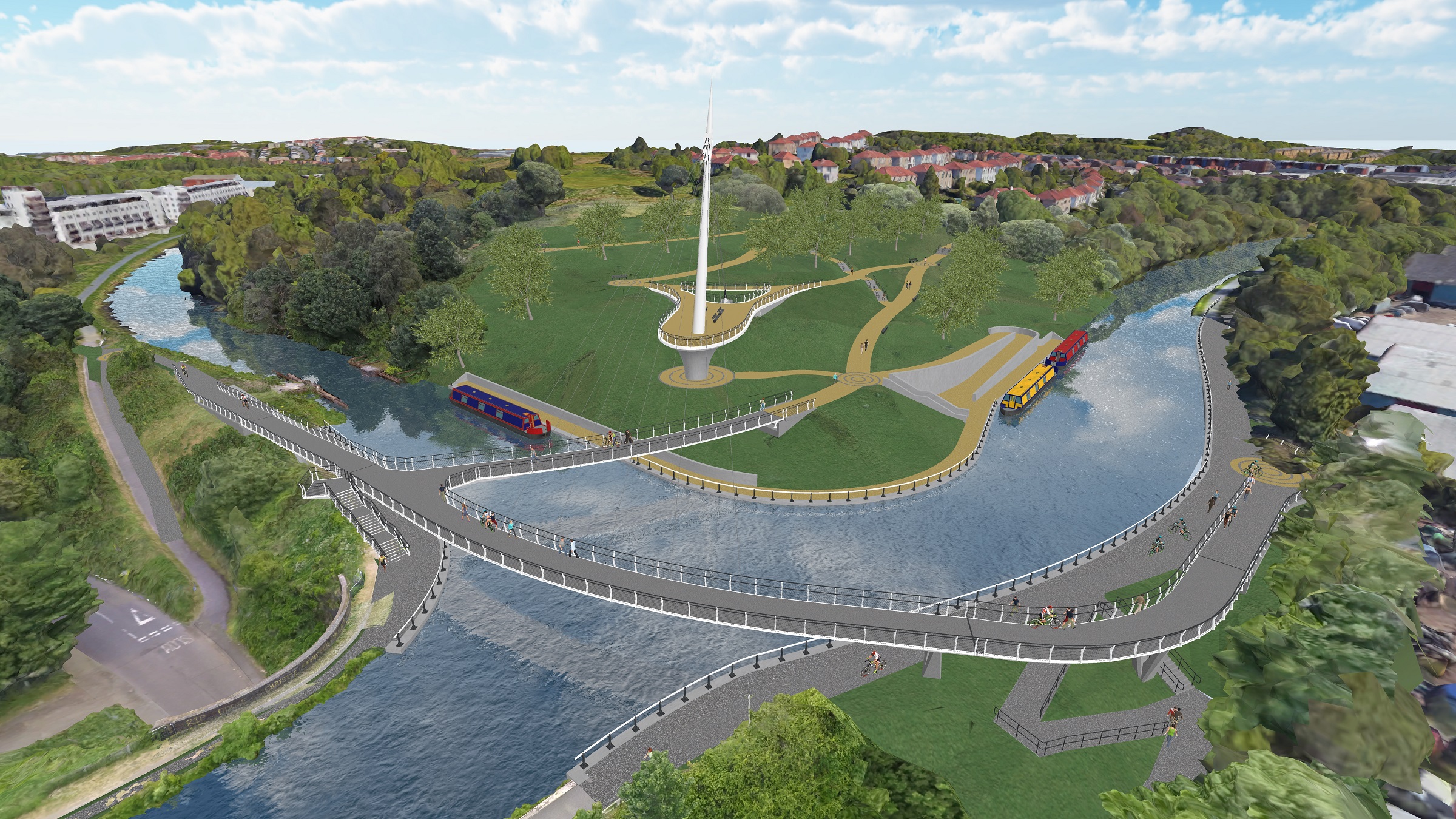 Construction of the project, which will be delivered by Scottish Canals with funding from Sustrans and Glasgow City Council’s Vacant Derelict Land Fund, expected to commence this autumn.

Cyclists and walkers currently have to use the narrow pavement of a busy and unlit road tunnel under the canal in order to move between the three communities. The new bridge will enable users to safely cross the junction on the towpath of the Forth & Clyde Canal, opening up access to the wider National Walking Cycling Network and the city centre. The design of the bridge was shaped by a public consultation held in the local area and online in autumn 2018.

As well as opening up access, it’s expected that the bridge will provide a landmark for the area. The ‘spire’ of the twin-span, cable-stayed suspension bridge will tower some 100 feet over the waterway and will be lit by a state-of-the-art LED lighting system inspired by that of another modern monument of the canal – The Kelpies, the world’s largest pair of equine sculptures. It’s anticipated the bridge will be shining through the Glasgow night by autumn 2021.

Catherine Topley, chief executive of Scottish Canals, said: “In recent years, Scottish Canals and its partners have driven an incredible transformation of the Glasgow Canal, bringing real benefits to the communities on its banks. The creation of the Stockingfield Bridge marks the next exciting step in that story.

“From the revolutionary engineering of The Falkirk Wheel to the soaring steel of The Kelpies, Scotland’s canals have long been associated with iconic artworks that bring real benefits to the communities around them. Thanks to the support of our partners at Sustrans and Glasgow City Council, North Glasgow will soon have its own epic landmark.

“Permanently connecting the communities of Maryhill, Gilshochill and Ruchill for the first time since the canal was constructed more than two centuries ago, Stockingfield Bridge will provide the missing link in the canal’s towpath network. By connecting these parts of the city, we will create the opportunity for even more people to explore the incredible environments of the Forth & Clyde Canal by boot or bike.” 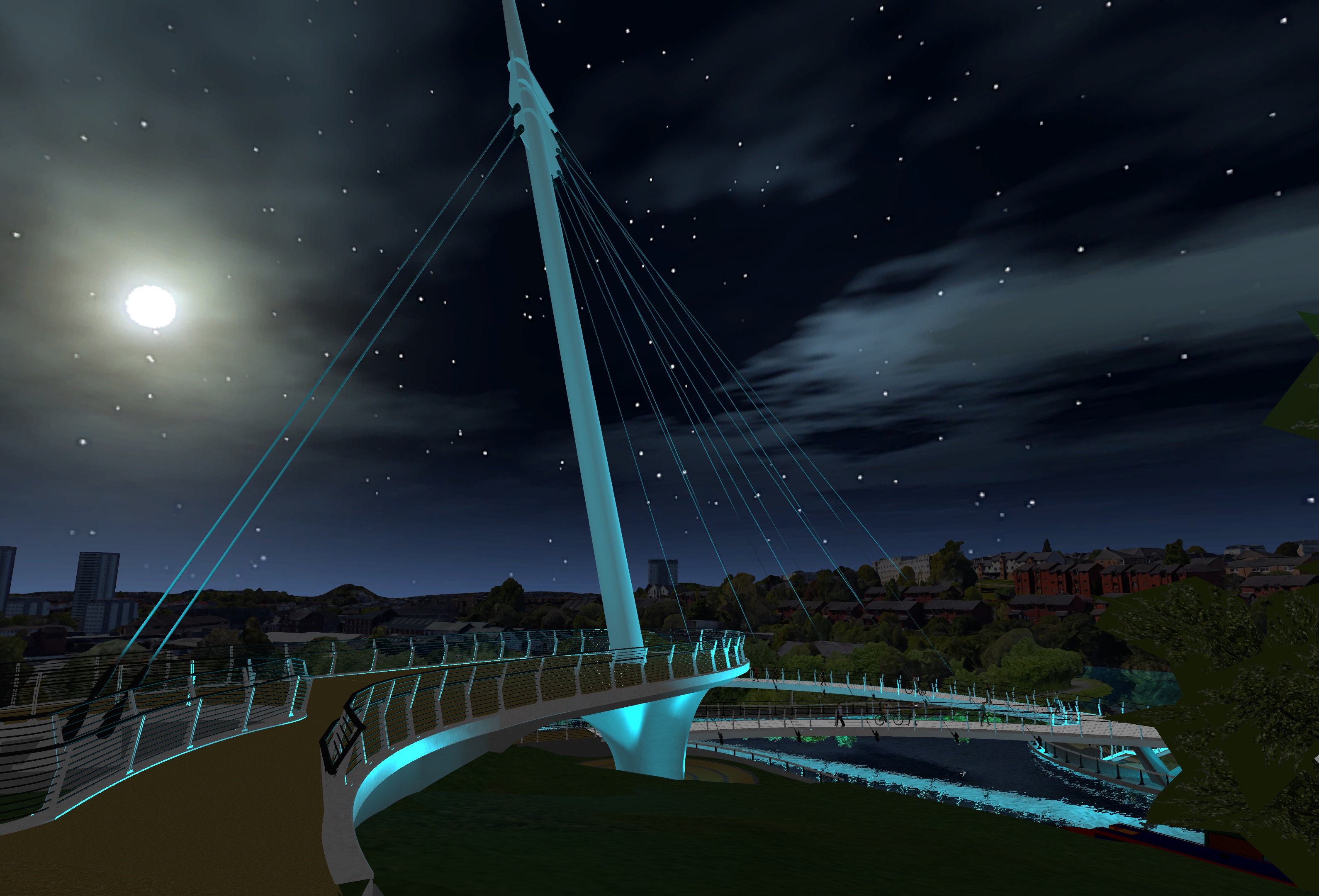 With a 300% increase in usage over the last decade, the towpaths of Scotland’s canals provide safe, off-road travel and recreation for all ages and abilities. Over the past decade Scottish Canals, Sustrans, local authorities and other organisations have jointly invested more than £10 million upgrading Scotland’s towpaths, creating important links between rural communities and vital active travel arteries in some of the nation’s busiest cities.

On completion, Stockingfield Bridge will allow cyclists and walkers to travel from Glasgow to Bowling on the Firth of Clyde and The Kelpies at Grangemouth using only the safe, traffic-free routes of the towpaths.

Matt MacDonald, head of infrastructure and delivery at Sustrans Scotland, said: “The Stockingfield Bridge will deliver transformative change for communities in north Glasgow, creating an attractive place that gives many people quicker and easier access to shops, schools and National Cycle Network Route 754, which is a gateway to walking and cycle routes stretching across the country. We look forward to this new link between communities becoming a new landmark for the area and place that the three local communities can be proud of.”

The construction of Stockingfield Bridge marks the latest stage of the transformation of the Glasgow Canal, which has seen considerable investment in its regeneration by Scottish Canals and its partners in recent years. New housing at Maryhill and Dundashill, the creation of a world-leading Smart Canal urban drainage system, and the presence of internationally-renowned events such as Red Bull’s Neptune Steps uphill swimming race have brought renewed vibrancy to the area, while organisations such as the Royal Conservatoire of Scotland, National Theatre of Scotland, and Scottish Opera have taken up residence on the banks.

Councillor Susan Aitken, leader of Glasgow City Council, said: “It’s evident from the tremendous amount of activity now taking place across the area that the North of Glasgow’s time has come and that the canal has been a major catalyst. From the wholesale regeneration of Sighthill to new housing and business developments and world-class sporting facilities ‘Glasgow’s other waterway’ is once again a tremendous city asset.

“That there are now ambitious plans for the first bridge to be built over the canal connecting these communities in around 230 years highlights the rebirth taking place along its banks. There will be so much more to come from this part of the city in the years to come as we and our partners work together to realise the potential of the canal and North Glasgow.”

Global engineering consultancy CH2M has been appointed to undertake the design of the new bridge. The consultancy’s Glasgow office has previously delivered a number of prominent bridges in the city, including the Clyde Arc, Tradeston Bridge, Dalmarnock Smart Bridge, Cuningar Loop Bridge and Bells Bridge.