A new £100 million strategic facility, which will be home to a fleet of new Poseidon MRA Mk1 aircraft at RAF Lossiemouth, has been officially handed over by Robertson Construction. 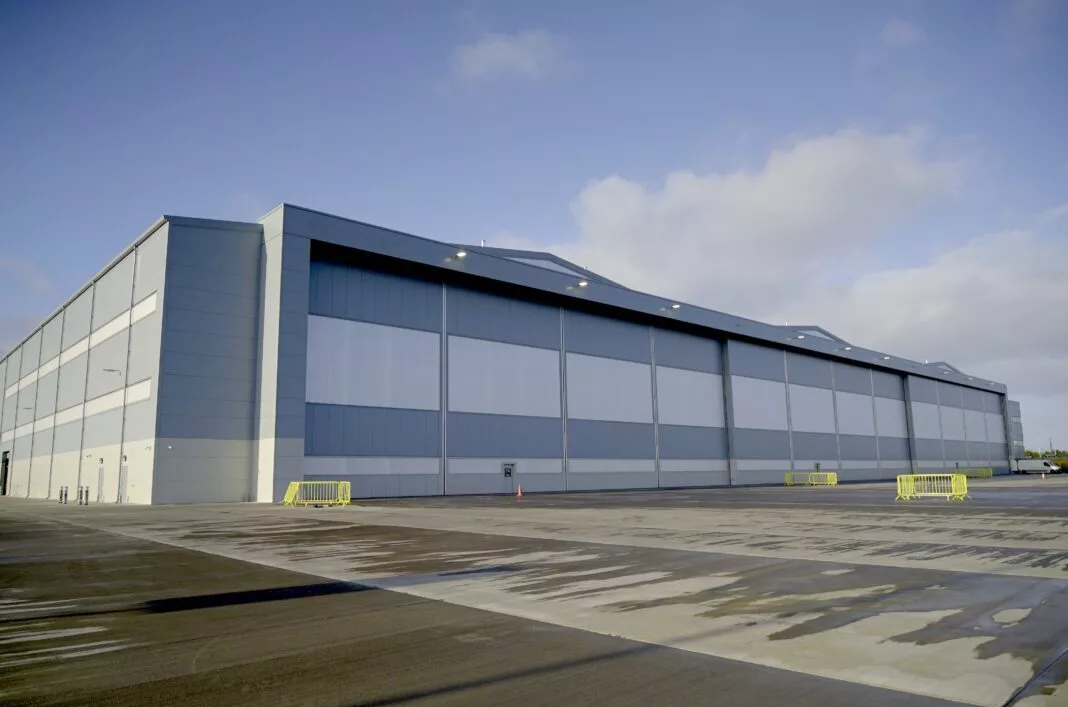 The firm has been working with Boeing, which is providing the facility for Defence Equipment and Support (DE&S), for the last three years. The initial 12 months of the collaboration was spent in pre-construction, during which time the site team, customer and design team focussed on the successful delivery of the project.

A new fleet of Poseidon aircraft will operate from RAF Lossiemouth and the first planes will operate from the base later this year, thanks to the long-term collaborative partnership between Robertson and Boeing.

The 33,000sqm facility, which has bolstered the UK’s maritime patrol capability, comprises squadron accommodation, crew and maintainer training facilities, flight planning facilities, workshop areas and a three-bay aircraft hangar, which is capable of housing three Poseidons at the one time. Over 100,000 tonnes of concrete have been batched on-site during the build, which has seen the involvement of 20 local sub-contractors to supplement the specialist services provided by Robertson’s Tier 1 Supply Chain Partners.

The predominantly steel frame build, which boasts 25,000sqm of cladding is the result of a collaborative partnership from all parties, instilling openness and transparency from the outset of the project.

Elliot Robertson, chief executive officer at Robertson Group, said: “It was imperative from the commencement of this project that trust would be an integral part of our strategy. Our team ensured that this project was delivered to the highest quality and could be held up as a beacon of best practice in collaboration and local sustainable delivery.”

Additionally, Robertson engaged with world-class aviation experts from Boeing to help deliver a state-of-the-art and whole-life solution for RAF Lossiemouth.

Mr Robertson added: “Robertson is no stranger to delivering projects of this magnitude and complexity, but we’re especially proud of the RAF Lossiemouth strategic facility, which further underpins our capability in the defence sector. Not only was it an opportunity for us to collaborate closely with Boeing and provide unrivalled local expertise and knowledge, but further illustrates how our delivery teams find solutions to the many challenges that are set through the design process to meet exacting and specific requirements.

“We’re looking forward to continuing working with our partners at RAF Lossiemouth and welcoming the rest of the Poseidon fleet.”

Anna Keeling, managing director of Boeing Defence UK, said: “We are incredibly proud to be handing over this state-of-the-art facility to DE&S after two years of hard work and investment, and we are excited to begin a new phase of Boeing’s partnership at RAF Lossiemouth.

“It’s a further sign of our commitment to local presence in the UK, skilled job creation as well as UK supplier engagement, and we could not have done it without the support of our Morayshire community partners, both on and off base.”

Robertson will continue work at RAF Lossiemouth to provide an ancillary building to support the strategic facility.

Throughout the project, the collaboration between Boeing and Robertson – which was founded in the Moray community over 50 years ago – has enabled, not only the early delivery of the facility but the continuation of work during sometimes challenging circumstances

DE&S, an organisation part of the Ministry of Defence, is responsible for the procurement and support of vital equipment and support that are used by the UK Armed Forces.