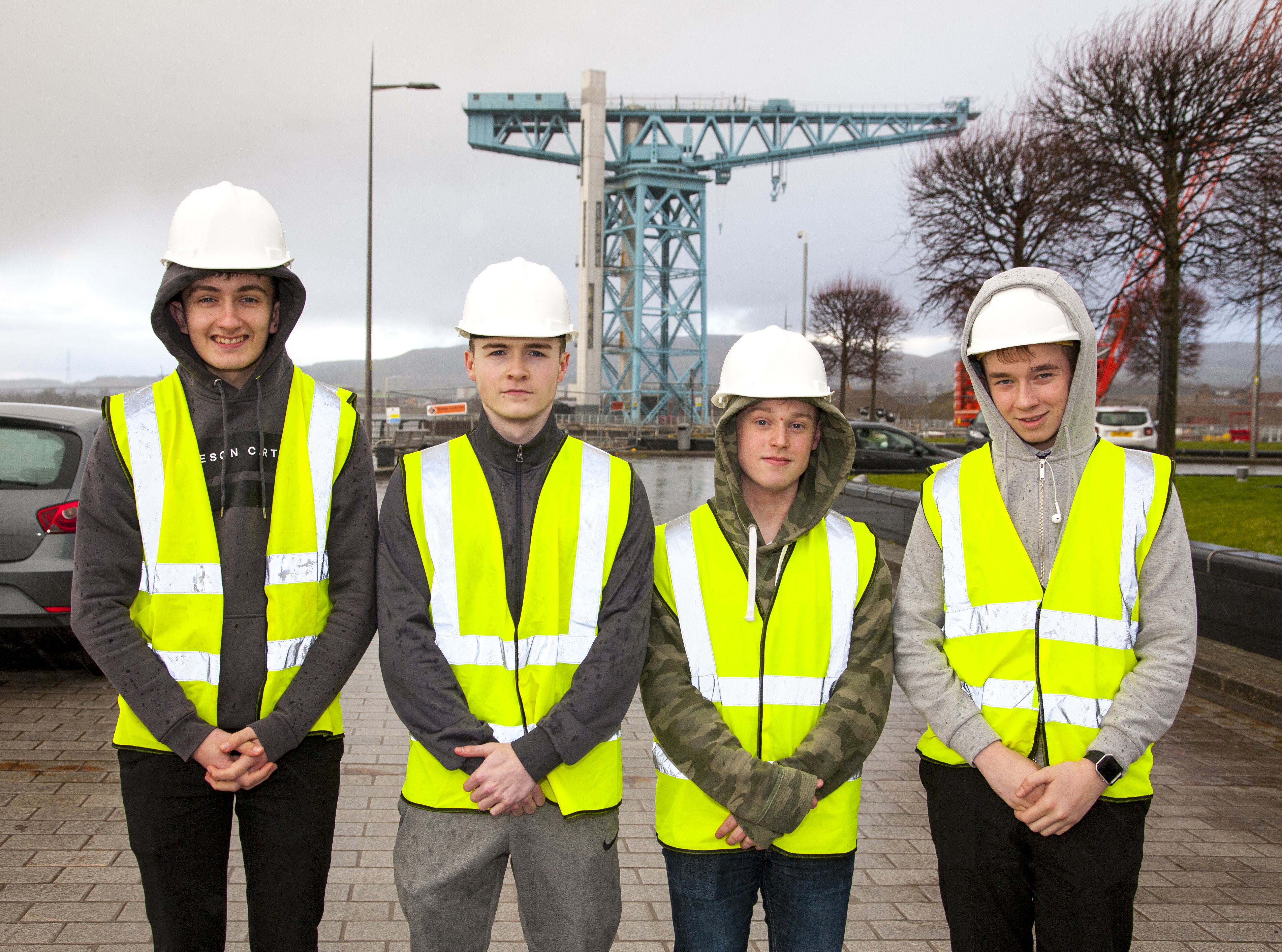 Typically taking two years to complete, Foundation Apprenticeships are taken alongside other subjects and lead to a qualification at the same level as a Higher (SCQF Level 6). Pupils spend part of the school week out of the classroom with a learning provider and in a workplace.

The students gaining work-based learning at Queens Quay, the £250 million regeneration project on the site of the former John Brown’s shipyard in Clydebank, are taking Foundation Apprenticeships in Civil Engineering with West College Scotland.

Working with I & H Brown, Muir Construction, and George Leslie Ltd. at Queens Quay, the West College Scotland students are gaining valuable first-hand experience of what the role of a civil engineer entails, on-site and in the office. The work-based learning includes involvement in many aspects of the works currently ongoing within Queens Quay, including the marine, road and piping works. On-site learning for the apprenticeship began in September 2018 and, for this cohort, will conclude in April.

On successful completion of the two-year apprenticeship the students can then use their qualification to explore progression into a number of other pathways, including a job such as a Modern or Graduate Apprenticeship, or moving on to study at college or university.

Four of the students attend St Peter the Apostle High School. Sean Wilson (17), Paul Martin (17) and Jack Hepburn (17) are working on-site with I & H Brown, and Liam McEvoy (17) is working with Muir Construction. Gregg Cochrane (17) and Andrew McLachlan (18) are both students from Clydebank High School and are working with I&H Brown and George Leslie Ltd.

Respectively Liam is already seeing the benefits of his Foundation Apprenticeship. He said: “Work placement at Muir Construction is a chance I’d never have had if I wasn’t doing a Foundation Apprenticeship. It has opened my eyes to what takes place on a work site, the amount of time it takes to get everything done and what it means to be a Civil Engineer including the patience required - that is a lesson no class room can teach.”

The Clydebank project is led by Andrew McCall, West College Scotland’s foundation and apprenticeship employer engagement coordinator. He said: “It’s fantastic to have the Queens Quay development right on our doorstep. It’s opening up so many opportunities for the local community and for students who have their sights set on careers within the construction and engineering sectors.

“My role is to liaise with companies within the industry to see where we can best place our students. There has been a real willingness from the companies working at Queens Quay to get involved, which means that the students are getting exposure to a diverse range of work-based activities. The Foundation Apprenticeship allows students to develop the skills, experience and knowledge they will need when they leave school, while kick-starting their careers and laying fantastic foundations for their future.”

Alistair Campbell, project manager for Dawn Developments, which is part of the Queens Quay project team, added: “The former John Brown Shipyard was a focal point in the lives of generations of people from Clydebank and beyond. The fact that young local people now have the opportunity to start shaping their future careers as part of this transformational development, which is bringing new life to the site and the wider area, is a great source of pride for everyone involved.”

Councillor Iain McLaren, convener of infrastructure, regeneration and economic development at West Dunbartonshire Council, said: “Queens Quay will make a huge difference to the Clydebank community, and I’m delighted the benefits are already being seen by our young people who are gaining valuable on-site engineering experience.”

Graeme Hendry, Skills Development Scotland national manager – development and delivery for Foundation and Graduate Apprenticeships, said: “Foundation Apprenticeships are closing the gap between the classroom and the workplace, with pupils seeing the benefits.