A process of controlled dismantling of the building at 2 High Street in Jedburgh has commenced along with preparation works for the future planned development of the site. 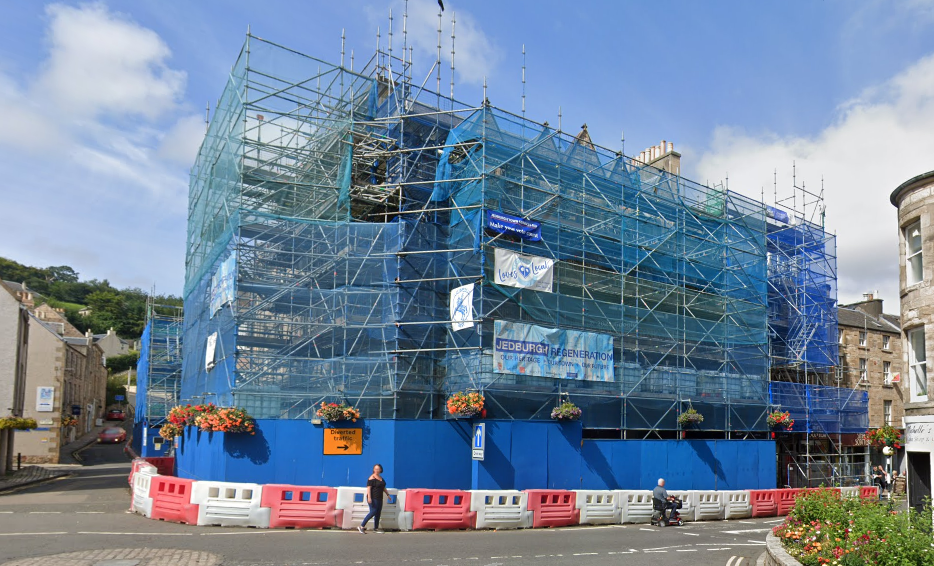 A programme of works for the dismantling of the building started in December and has seen a number of key jobs already completed.

This commencement of work comes after Scottish Borders Council was granted a Compulsory Purchase Order last year allowing progress to be made with the demolition.

Contractors have been working to generally clean up the site and improve access routes around the building. They have also made necessary alterations to the surrounding area including installing a temporary electric supply and making alterations to the street lighting in preparation for further works to take place.

Given the fragile state of the current building, a gradual process of controlled dismantling is required to demolish the building safely and a number of major works are required to be undertaken over the coming weeks and months to allow this.

To facilitate a full dismantling of the building, significant steelwork is required to be installed which will support the shared gable wall to the High Street and will be used in the construction of the proposed future development of the site.

Service ducts to provide public utilities to the site will also be installed to prepare the building for the future development project.

Additional site investigation works have also commenced this month to reassess the amount of underpinning required throughout the building. Once this has been ascertained the underpinning works will commence followed by the laying of a concrete raft foundation.

In January, planned archaeological survey and monitoring works were also undertaken in the basement of the building which uncovered an historic well dating back to the 16-17th century belonging to a former building that sat on the site which was demolished around 1866.

As a result of unforeseen additional works being identified on the project in recent weeks including the further underpinning assessments and the delay to work as a result of the archaeological dig following the findings, and given the complexity of the overall project, the completion of the demolition works will now be later than planned.

An original timescale of 34 weeks had been outlined for the full demolition of the building with a late July completion date, however this will now be reassessed.

Gordon Edgar, executive member for infrastructure, travel and transport for Scottish Borders Council, said: “After lengthy delays, it’s encouraging to see progress being made at 2 High Street Jedburgh meaning the controlled demolition of the building is nearing ever closer.

“I’m conscious that there is a lot of public interest in this project and that locals are eager to see quick progress made on the demolition of the building and its subsequent replacement.

“In order to safely demolish this building, a number of significant works need to be carried out to initially stabilise the building before a gradual process of dismantling can take place.

“This process of controlled dismantling is extremely complex and requires a great deal of care. Since beginning the project in December a number of unforeseen and additional works have been identified which mean the overall completion date will be later than anticipated.”

Once the dismantling process is completed, a new building which blends into the surrounding environment and complements the traditional architecture of the surrounding streets will be built to replace the existing structure.

This will incorporate salvaged stone ornaments from the existing building in the new stone wall facing the street, providing a link to the past and preserving the history of the old building.

Once finished, the building will contain a commercial space occupying the ground level and a new apartment block consisting of three flats on the upper level.