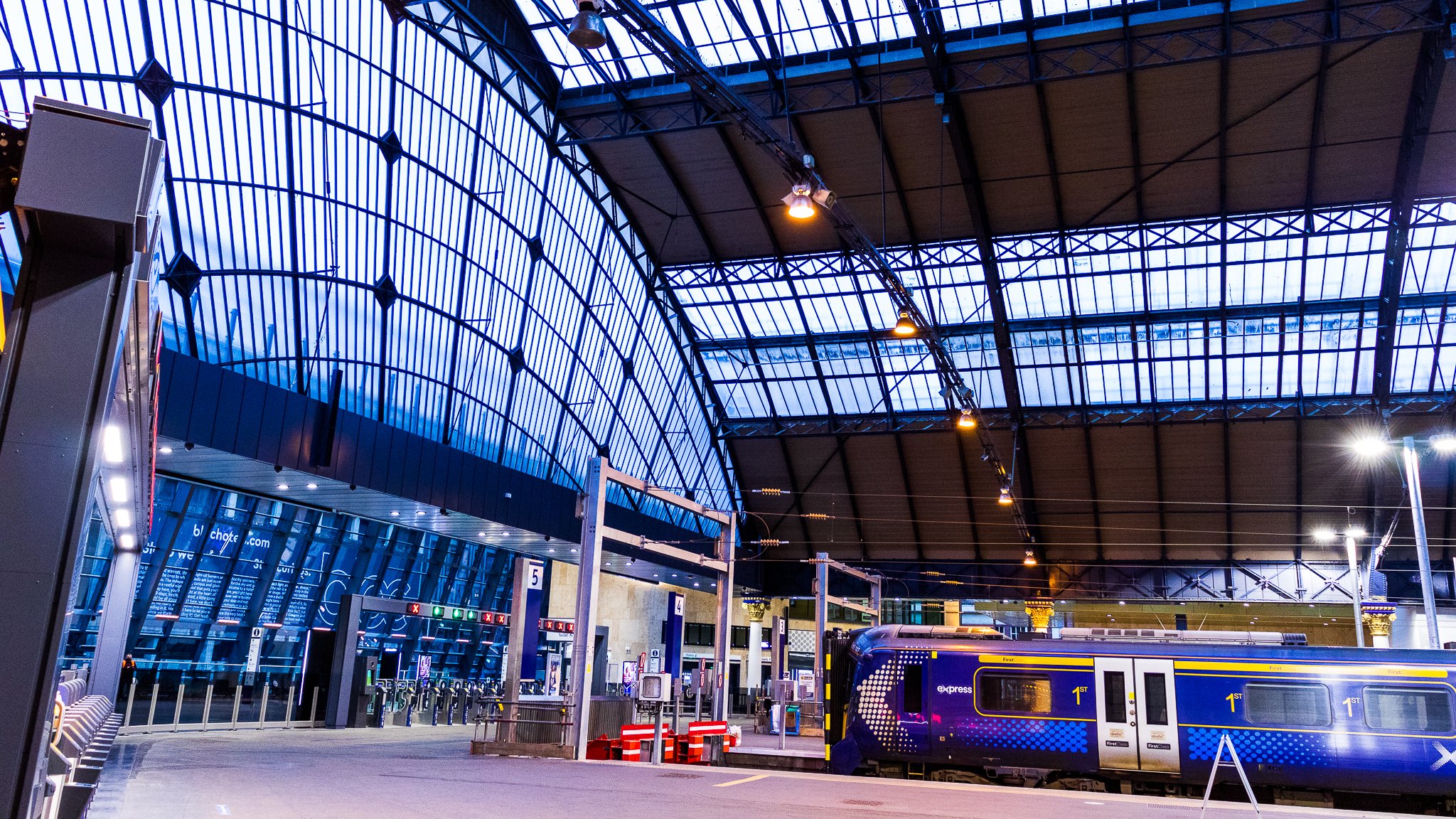 The First Minister helped to unveil two plaques at the event, the first a replica of the station plate from 1881 celebrating the completion of the station’s Victorian barrelled roof and the second to celebrate the current redevelopment.

Speaking at the formal launch, the First Minister applauded the substantial investment of over £9 billion in rail infrastructure since 2007 that sees over 75% of all rail passenger journeys in Scotland made by electric services.

She also announced key progress in the continuation of rail decarbonisation with confirmation that the £63m Barrhead line electrification will now move to the construction phase. This is the latest milestone in the delivery of Transport Scotland’s Rail Decarbonisation Action Plan, launched last year, which will see removal of all diesel on passenger services by 2035.

The First Minister said: “With just a month until world leaders arrive in Glasgow to address the growing climate crisis, Scotland’s Railway is on well on track in its journey towards full decarbonisation of passenger services.

“This new Glasgow Queen Street, delivered as part of the Edinburgh Glasgow Improvement Programme, is a shining example of how we can modernise historic and iconic stations, offering greener transport hubs that are more attractive to commuter, business and leisure markets alike.

“This station led the city through industrialisation and it now stands out as an example of what we can achieve as we navigate our way towards net-zero.

“Since 2007, we have invested over £9bn in rail infrastructure, including electrification to enable greener trains to run on those routes. We are committed to continued electrification, and the use of alternative traction technology, if we are to address the challenges facing this planet. Scotland, as a responsible global citizen, will do everything we can to play our part.” 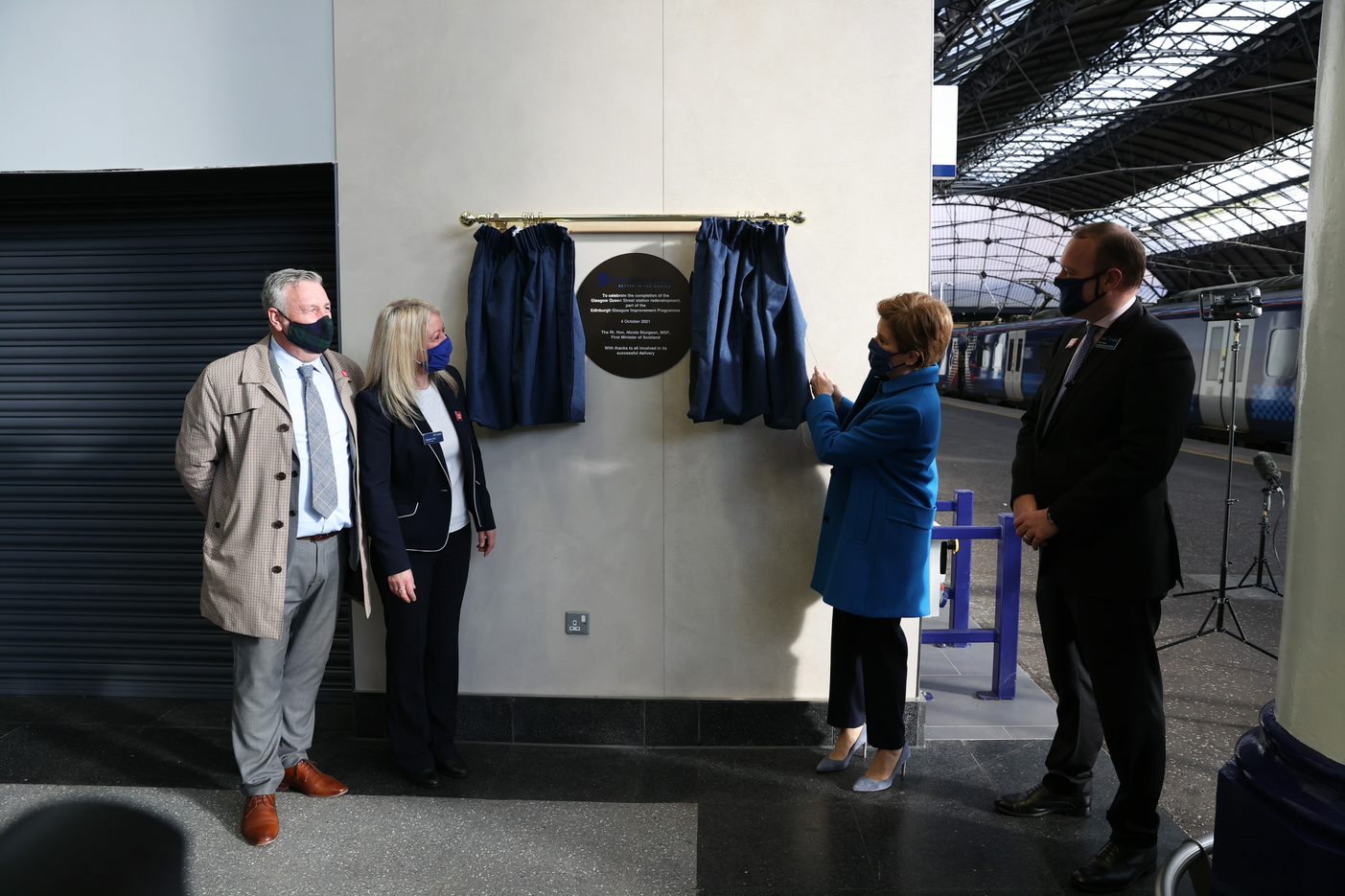 Alex Hynes, managing director of Scotland’s Railway, said: “As Scotland continues to recover from the impact of the pandemic, and as Glasgow prepares to host COP26, we are incredibly proud of this new station and the modern, green railway it symbolises.

“The extended and electrified platforms at Glasgow Queen Street and the faster, longer, greener trains they support will make sure our railway is ready to play a role in combatting the challenge of climate change and its impact on how we live and work in the future.

“Our engineers, contractors and station teams have worked tirelessly to create an iconic new station for Glasgow and should be commended for completing such a complex job without having to close Queen Street to its passengers.”

The extended station boasts a larger concourse than before with double the circulation space for passengers and it is also fully accessible with lifts into the new building from Queen Street and step-free access from Dundas and North Hanover Streets.

The facilities for customers have also been improved with a new travel centre, toilets and Changing Place.

Work on redevelopment began in 2017 when engineers started to demolish the 1970s buildings in front of the Victorian station to clear the space for the new expanded concourse.

Over the course of a year, more than 14,000 tonnes of material was removed from the site as mini-diggers were used to demolish the buildings piece by piece from the top down.

Around 94% of the demolition material was recycled – some of it even returned to the station to be used in the foundations of the new concourse.

In December 2018 the expanded station’s steel frame began to go up, and Queen Street truly took on its distinctive new shape in September 2019 when the last of the 310 glass panels on the station frontage was installed.

Inside, the station’s old travel centre and staff accommodation block on Dundas Street gave way to a lengthened platform 1. Platforms 2, 3, 4 and 5 were all extended by 26m and all platforms electrified to accommodate ScotRail’s new, longer Class-385 electric trains.

The redevelopment project also gave a boost to the local economy with 70% of its budget being spent with suppliers within a 40-mile radius of the station.

Hector MacAulay MBE, managing director of Balfour Beatty, said: We are delighted to have been partnered with Network Rail for this award-winning transformational project, which has seen the original Queen Street Station brought back to life and now offers an enhanced passenger experience. I am delighted to say that during the four-year construction period there were no delays in operations or performance within the station.”

Bruce Kennedy, architect director BDP’s Glasgow studio, said: “BDP was privileged to lead the design for the redevelopment of Glasgow Queen Street Station, which has transformed the passenger experience. Enabling fantastic views of Glasgow city centre and celebrating James Carswell’s train shed, the station is now a fitting gateway to Glasgow and the rail network.

“Transport Scotland’s investment has allowed us to make a contemporary addition to the country’s rich cultural heritage of rail architecture, which is a highly visible sign of the continuing investment in the decarbonisation of Scotland’s Railway.”

Gerry Bradley, partner IDP Architects, said: “IDP Architects feels privileged to have held a key role in the delivery of such an iconic building, at the heart of the city centre. Network Rail’s bold vision for the station has now been realised, leaving Glasgow Queen Street as a modern terminus station that we should all to be proud of.”