The final proposed concept designs for the transformation of Edinburgh’s historic George Street have been unveiled. 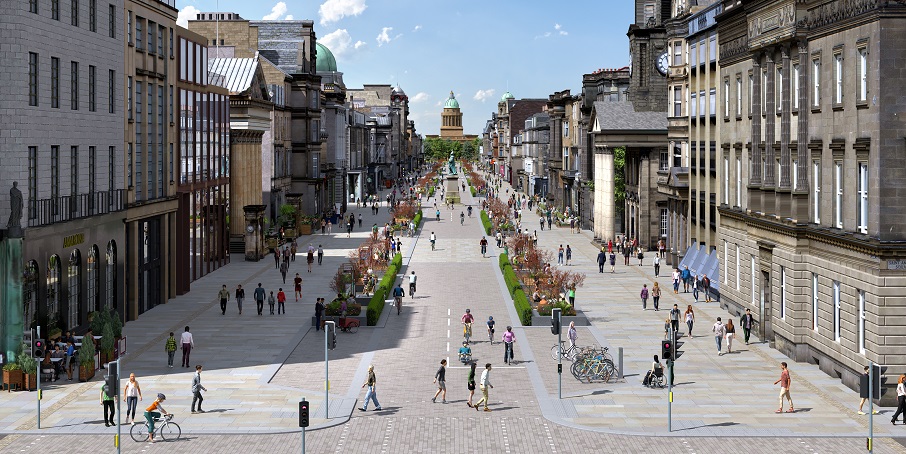 Detailed artist’s impressions and a 3D fly-through illustrate how the street and surrounding area, within the UNESCO World Heritage Site, could look under the George Street and First New Town Public Realm Improvements Project.

Significantly widened pavements, landscaped spaces for play and relaxation and a cycling thoroughfare, where motor traffic is largely removed, will create a people-friendly setting. By retaining symmetry and removing street clutter alongside ‘urban greening’ through shrubs and hedging, the designs both protect the area’s heritage and enhance the environment.

Improvements are being delivered as part of a coordinated package of projects under Edinburgh City Centre Transformation. This includes the forthcoming Meadows to George Street and City Centre West to East Link schemes, which will transform walking, wheeling and cycling routes and connections across the city centre. These schemes also support the City Mobility Plan, a ten-year strategy to overhaul transport and mobility in the capital to deliver a sustainable, net zero carbon and inclusive future.

The concept design for George Street has been progressed by a design team led by Tetra Tech with LDA Landscape Design. It follows several years of development and engagement to refine design objectives with the public and stakeholders, including community councils and heritage, business, walking, cycling and accessibility groups. 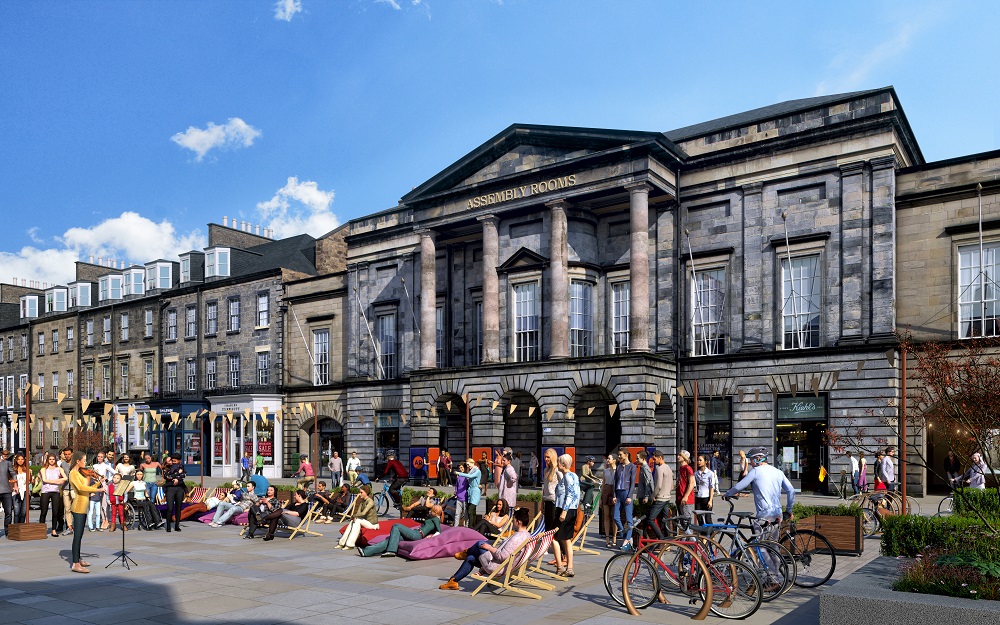 In February and March further engagement will take place with key groups, while the public will be able to see the design for themselves and tell us how they might enjoy a revitalised George Street. Feedback gathered during these months will inform a final iteration of the design proposal before being brought to the transport and environment committee in April. The required statutory processes under which the scheme will be constructed would begin this summer.

Councillor Lesley Macinnes, transport and environment convener, said: “These animated concept designs offer an exciting glimpse into what George Street and the surrounding area could look like in 2025 – a welcoming, relaxing and unique space, where people will want to spend time, to visit local shops, cafes and restaurants and to travel to and through the city centre.

“This vision has been years in the making and follows significant engagement with the public and a range of groups representing different interests. It’s essential that its design works for everyone, which is why we’ve spent time ensuring it meets people’s access needs, that it allows residents to go about their daily lives and that it will encourage local businesses to flourish, particularly as we look to make a strong, green recovery from the COVID crisis.” 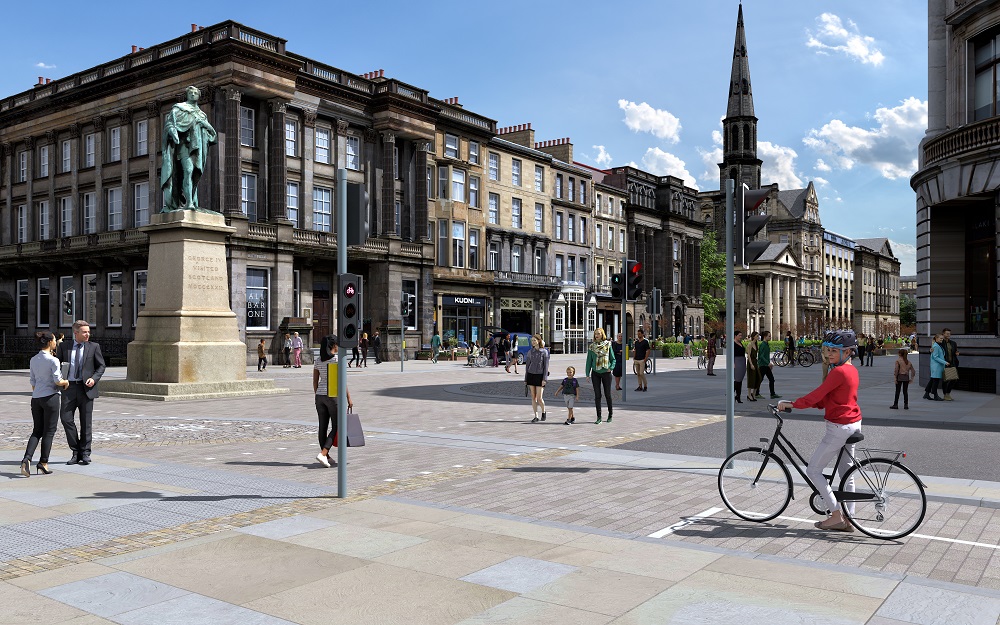 Councillor Karen Doran, transport and environment vice convener, said: “I was thrilled to see the concept designs for this project brought to life and look forward to hearing the responses of all those who watch our video or see the beautiful, detailed illustrations.

“This initiative offers the opportunity to transform one of Edinburgh’s iconic streets for the better, creating an accessible, inviting space, where both the historic environment is protected and biodiversity promoted, and where people can relax and spend time on foot, bike or wheelchair.”

The transport and environment committee first agreed to increase pedestrian space in the city centre in 2013 and in 2014 and 2015 a new layout was trialled on George Street, with stakeholder engagement and a subsequent series of user surveys demonstrating a strong appetite for change. Since then, a vision and design principles have been developed and the project was widened to include the interconnecting Castle, Frederick and Hanover Streets and the junctions with Charlotte and St Andrew Squares. Further, significant engagement with the public and stakeholders has led to the designs published today. 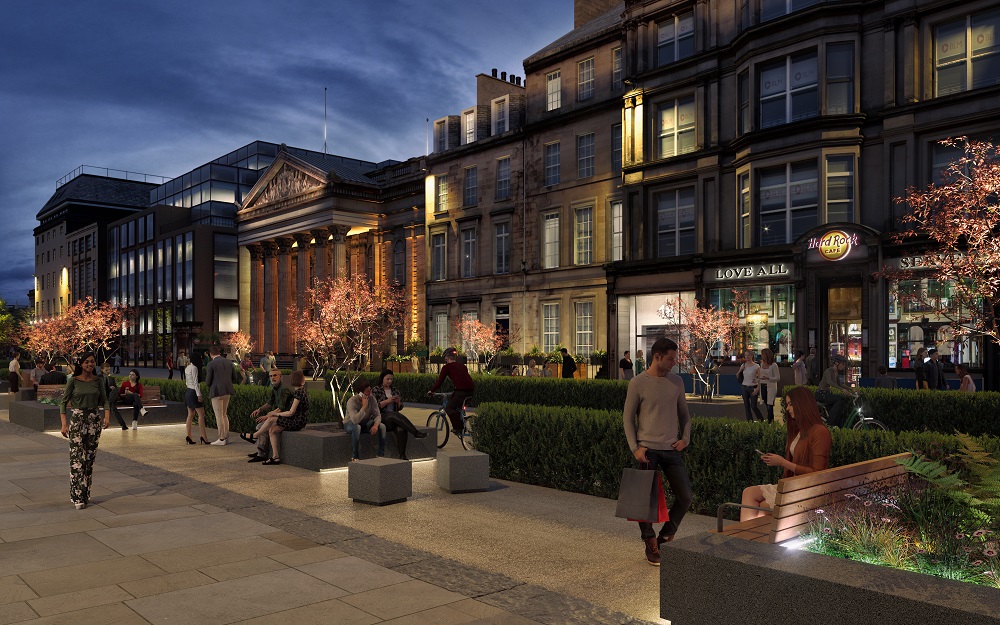 Key considerations for the project have been putting people first, protecting the area’s heritage, promoting the environment and biodiversity and providing accessible transport links. Elements of the concept design relating to each include:

The George Street and First New Town Public Realm Project responds to and supports various Council initiatives, such as the Active Travel Action Plan, in addition to Edinburgh City Centre Transformation and the City Mobility Plan, as well as projects like Trams to Newhaven and Low Emission Zones.

If approved, it is intended to begin construction work on the scheme in 2023, with an anticipated completion in 2025. It is expected to cost £32m, with £20m from Transport Scotland via Sustrans.