The developers behind consented plans to transform the University of the West of Scotland (UWS) site in Hamilton into an ‘urban village’ have lodged new plans to increase the number of affordable homes in the development.

To be known as ‘Hamilton Green’, the project is to be completed by First Endeavour in partnership with the university over 15-20 years.

A new application has now been made for the approval of specific matters for the development, including a change to increase the number of affordable homes in the development from 25% to 46.5%.

Designed by Halliday Fraser Munro, the proposal will see the former campus being converted to allow for 355 residential units, a 70-bed care home, a 60 to 80-bed hotel, space for 5000 square metres for office space and 400 square metres for retail and cafe spaces.

There will be a range of one, two and three-bedroom flats which will be private, and there will be 24 housing association flats with two bedrooms and a range of one and two-bed council flats as well as 17 two, three and four-bedroom council houses.

The houses on the site will be for SLC.

There will be three points of access for cars to the homes from Arthur Street, Barrack Street and Beckford Street.

The village will provide a highly accessible environment for residents and members of the public, there will be 19 accessible parking bays and dedicated accessible space for each flat which has been designed for wheelchair use.

A landscaped plaza with greenspace areas and a pedestrian and cycle route has been proposed with seating areas with arms and backrests as well as individual seats to allow for wheelchair users to sit with others.

A range of trees and hedges will be plated throughout the village to provide green space and will contrast the built-up urban area.

The current site has 201 parking spaces, but the application proposed to increase this to 303 to accommodate the new residents and visitors to the village.

The new application was received by SLC on March 25 and was validated on April 8.

The deadline for determining the application is August 7. 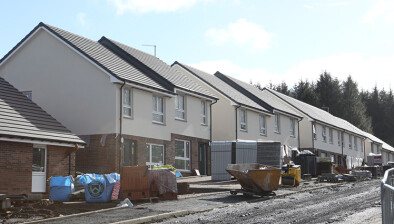