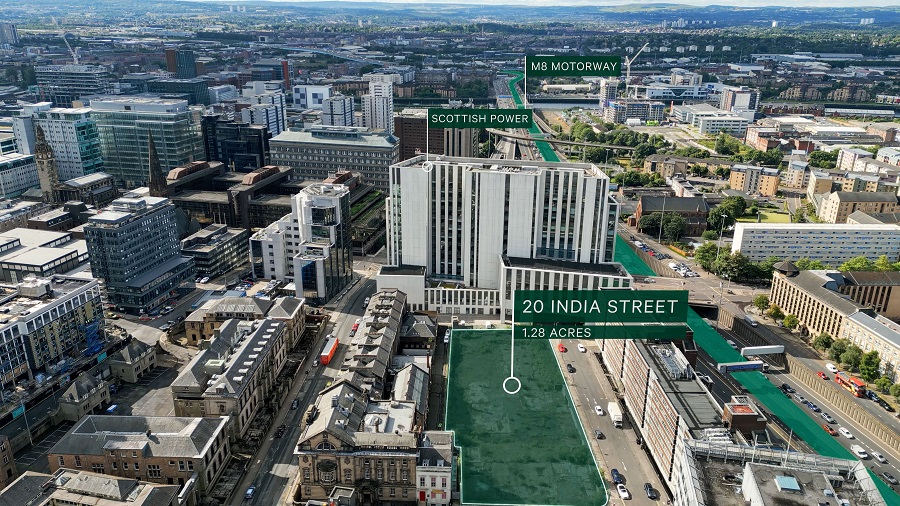 The largest development site in Glasgow city centre has been launched to market after CBRE was appointed to seek offers for the cleared site at 20 India Street.

Extending to 1.28 acres (0.52 hectares), the site was previously home to an office building called Nye Bevan House (used by Strathclyde Regional Council and then by Glasgow City Council). It was demolished in 2015 with the site cleared to make way for new development. It is now available for sale or long-term let.

CBRE is marketing the site on behalf of City Property Glasgow (Investments) LLP, which owns and manages a diverse portfolio around of 1,800 commercial properties in the city.

Initial feasibility studies have been undertaken by architects Hawkins\Brown, highlighting a range of transformational redevelopment opportunities for the site.

It is located yards away from Charing Cross railway station and in close proximity to prominent developments including Scottish Power’s 220,000 sq ft HQ, Starwood Capital’s 172,000 sq ft St Vincent Plaza development and Moda Living’s build-to-rent development on the former Strathclyde Police HQ. It is also on the doorstep of Glasgow’s cultural quarter.

CBRE sold an adjacent building called Portcullis House (located at 21 India Street) in 2020 on behalf of Mapley which is due to be demolished for redevelopment. It was purchased by Watkin Jones who will create a new build-to-rent and co-living development (subject to planning).

Andy Cunningham, head of advisory & transaction services, CBRE Scotland, said: “20 India Street offers a rare chance to secure the largest development site in one of Glasgow’s best-connected locations. It is a major opportunity for a developer to create a new sense of place in an area with so much potential. We anticipate a huge level of demand, likely from residential, student accommodation and office developers, now the site is available.”

Allan McDonald, asset maximisation manager at City Property Glasgow (Investments) LLP, added: “We are delighted to be working with CBRE on bringing 20 India Street to the market. This area of the city has seen major investment over the last few years, and it is anticipated that this site will attract substantial interest from developers. We look forward to playing a part in a further significant development in this area.”