Fife Council has given planning permission in principle to Taylor Wimpey East Scotland’s proposals for 1,400 homes and a new primary school in Halbeath.

The local authority’s west area planning committee has given 20-year planning permission in principle for the on the 80-hectare agricultural site at Pleasance Road. 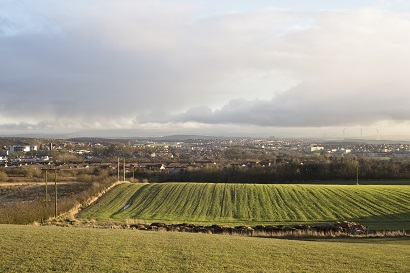 The plan will effectively join Dunfermline to the village of Kingseat.

The phased development will initially include 340 homes.

Plans for an improved road network include a segment of a new northern link road and realignment of Whitefield Road, which leads to Queen Margaret Hospital.

Halbeath Road could also be upgraded to two lanes in each direction between Asda and Linburn Road.

The developer has welcomed the decision, hailing it as a “significant milestone” in the development’s history.

Taylor Wimpey East Scotland’s land and planning director, Pauline Mills, said: “We are extremely pleased to have secured a resolution to grant planning permission in principle for our mixed-use development for the land to the north of Halbeath, which will consist of around 1,400 new homes with a community core, and forms part of the north Dunfermline strategic development area.

“This decision is culmination of almost 20 months’ work and represents a significant milestone in building this new community in west Fife.”

Ms Mills said the company, which builds more than 14,500 homes every year across the UK, will continue to work with Fife Council and the local community to make a detailed application for the first phase of new homes later this year.

“It is our intention that this will be at the western edge of the site at Whitefield Road and will consist of around 340 new homes, including 25% affordable properties.

“With many months of work ahead to secure the detailed planning and technical consents that are needed for a development of this scale, we anticipate that it will be around another two years before the first new homes will be released for sale at this development,” she added.