The recovery in UK construction output gained further momentum during June, according to the latest PMI data which saw overall activity expand at the fastest pace since June 1997. 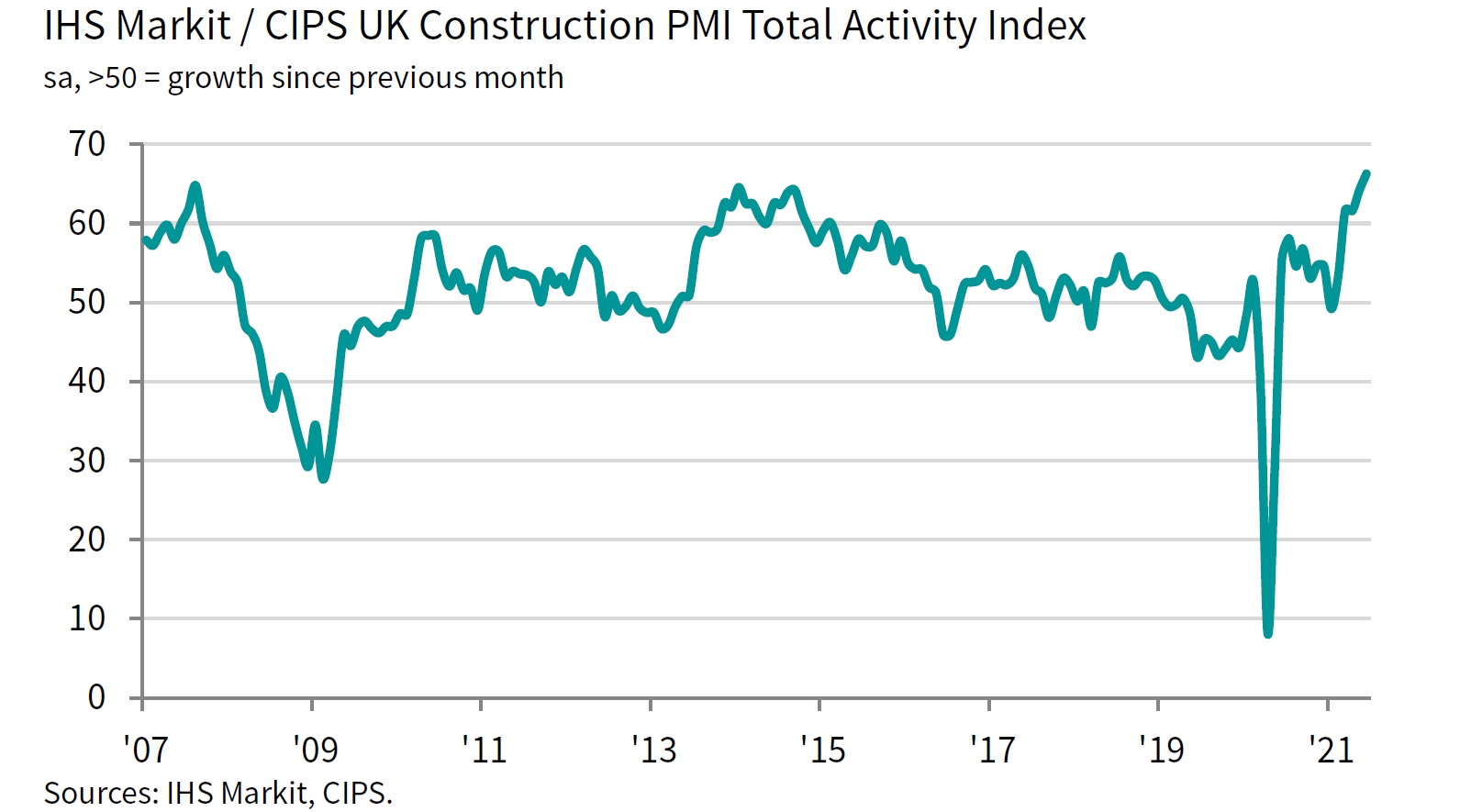 At 66.3 in June, up from 64.2 in May, the seasonally adjusted IHS Markit/CIPS UK Construction PMI® Total Activity Index signalled the strongest rate of output growth for exactly 24 years. Sharp increases in business activity were seen across all three main areas of the construction sector monitored by the survey.

Construction work in the house building sub-category (index at 68.2) increased at the fastest pace since November 2003. The second-best performing area was commercial work (66.9), with output rising at the strongest rate since March 1998. Meanwhile, civil engineering activity rose sharply in June (60.7), but the speed of growth eased to a three-month low.

Survey respondents widely commented on a rapid turnaround in demand for new construction work, especially residential building and commercial projects related to the reopening of the UK economy. Total new orders have increased in each of the past 13 months, although the latest expansion was slower than May’s survey-record high.

Construction companies indicated another month of sharply rising employment numbers, reflecting efforts to boost capacity and meet incoming new orders. The rate of job creation moderated since May but remained among the fastest seen over the past seven years. Moreover, sub-contractor usage increased at the steepest pace since the survey began in April 1997.

Around 77% of the survey panel reported longer lead times among suppliers in June. The seasonally adjusted index pointed to the worse month for supplier delays since the survey began just over 24 years ago. Construction companies overwhelmingly cited stock shortages among vendors, reflecting severe delays with shipping and haulage, especially for products sourced from the EU. In terms of building materials, panel members commented on short supply across the board, particularly cement, concrete, plaster, steel, timber and roof tiles.

Imbalanced demand and supply resulted in rapid cost inflation across the construction sector in June. Average prices paid for products and materials increased at survey-record pace. Adding to cost pressures in June was the steepest rise in rates charged by sub-contractors since the survey began.

Construction companies remain optimistic about growth prospects for the next 12 months. That said, the degree of confidence eased to its lowest since January, in part reflecting concerns about labour availability and the sustainability of the recent surge in demand.

“Total new orders expanded at one of the strongest rates since the summer of 2007, mostly reflecting robust demand for residential projects and a boost to commercial work from the reopening UK economy.

“Supply chains once again struggled to keep up with demand for construction products and materials, with lead times lengthening to the greatest extent since the survey began in April 1997. Survey respondents widely reported delays due to low stocks of building materials, shortages of transport capacity and long wait times for items sourced from abroad.

“Purchasing prices and sub-contractor charges both increased at a survey-record pace in June, fuelled by supply shortages across the construction sector. Escalating cost pressures and concerns about labour availability appear to have constrained business optimism at some building firms. The degree of positive sentiment towards the year-ahead growth outlook remained high, but eased to its lowest since the start of 2021.”

Duncan Brock, group director at the Chartered Institute of Procurement & Supply, added: ”A wave of new orders overwhelmed supply chains again this month where stock levels could not keep up with building work accelerating at the fastest rate since June 1997.

“The meagre availability of raw materials placed obstacles in the path of stronger workflows where supplier delivery times extended into record-breaking territory once again and surpassed the height of disruption when the pandemic first hit.

“A lack of delivery drivers and logistics difficulties for EU imports left stock undelivered or unavailable and construction companies waited while costs mounted. Construction’s heavy load remains inflation rising to its highest rate since April 1997 as a staggering 86% of respondents reported paying more for their goods in June.

“These malfunctions in supply chain performance may be a global issue but this doesn’t help UK builders who are ready but unable to return fully to projects which was reflected in the lowest optimism since January. This surge in activity will lose momentum while labour availability along with key materials remain elusive.”

Mark Robinson, group chief executive at SCAPE, said: “The pace of growth in the construction sector shows no sign of slowing and it is a far cry from the historic low-levels recorded at the height of the pandemic. However, ongoing concerns over access to materials and skilled workers is driving up input costs and delaying some projects.

“While material shortages may pass, the skills and labour shortage is a long-term challenge which has only been amplified by the pandemic. It’s vital that the industry continues to invest in initiatives to train and attract the talent of tomorrow, while the government must ensure specific trades are included in the shortage occupation list to alleviate pressure.”

Matthew Farrow, director of policy for the Association for Consultancy and Engineering (ACE), said: “The figures reflect growing confidence in the UK economy and the construction industry which is, of course, welcome. However, it is clear that the severe shortage of products and materials, as well as issues around transportation, are now having an adverse effect on lead times and putting inflationary pressure on prices.

“There is no easy fix to this problem, other than medium to long-term changes in our approach – I would hope that this leads to smarter design through the use of alternative materials, which could also have the added benefit of creating less carbon intensive buildings and structures and accelerating our path to Net Zero.”

Gareth Belsham, director of the national property consultancy and surveyors Naismiths, added: “Demand has got so hot, and the supply chain so stretched, that increasing numbers of projects are being burnt by material cost inflation and delays.

“With waves of new orders still flooding in, Britain’s builders are scrambling to keep up – taking on more staff and ramping up their use of sub-contractors.

“But the real pinchpoint is building materials. A double-whammy of post-Brexit trade friction and the pandemic’s legacy means the industry is suffering severe shortages of key materials including cement, concrete, plaster, steel, timber and roof tiles.

“Input costs – which include materials and labour – are rising at their fastest pace since records began nearly a quarter century ago, and delivery times have never been longer.

“The industry is riding high on a wave of demand and confidence, but there’s a danger that wave could soon break on the rocks of material shortages.

“Materials suppliers are desperately trying to respond by ramping up production, but as the industry accelerates into a full-on boom, the road ahead is likely to be beset with supply-side speed bumps.”