A developer has mounted a defence of its proposals for around 500 homes to the north of Summerston after a study found that developing the greenbelt land for housing would not be appropriate. 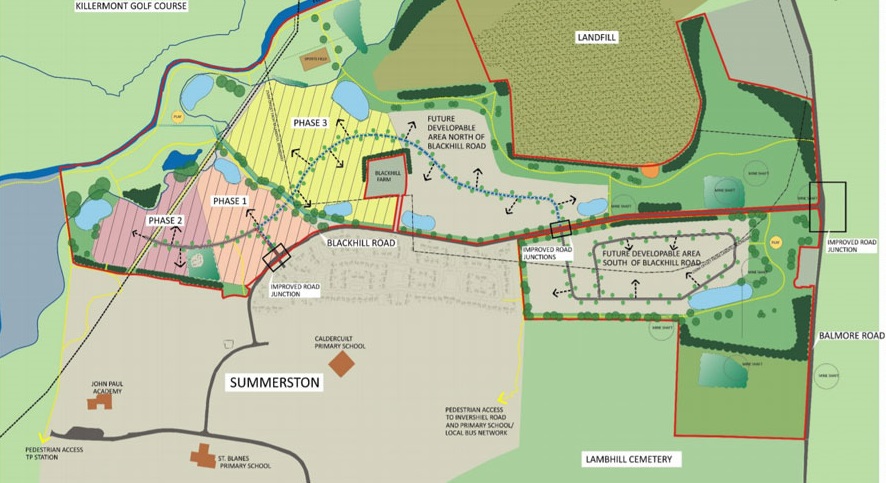 Caledonian Properties unveiled plans at the start of the year to create a “high quality” neighbourhood on land at Blackhill Farm bounded by the River Kelvin, Blackhill Road and Balmore Road.

The homes were planned to be mainly two storeys, providing a mix of two, three and four-bedroom dwellings. Houses will generally be detached, but interspersed with semi-detached and terraced units.

It concluded: “When considered in the context of a surplus in housing land supply, the climate and ecological emergency and the move towards a carbon neutral city, it is concluded that additional housing should not be supported, and that the study area’s green belt designation should be retained.

“There is therefore no housing land justification for development in this location at present.”

Caledonian had already submitted an application seeking approval for the principle of residential development but has now lodged a new one, seeking to address the study’s arguments against housing.

The developer said the feasibility study had reached the wrong conclusions about housing land supply and argues: “In recent years there has been a recovery in the market for family housing and the Summerston site will deliver much needed private family housing to an area that has seen no new build private family housing since the development of the extension to neighbouring Grange housing estate by Taylor Wimpey in 2012.

“With the majority of new private housing to the north of Glasgow focused on Robroyston or within neighbouring East Dunbartonshire, Summerston has pent up demand for mid-market family housing.

“As a consequence there is strong interest from private limited companies and the larger private house builders to deliver a quality, well-planned and integrated extension of the existing Summerston settlement.”

A planning statement on behalf of Caledonian explained: “The feasibility study was to be considered by the Neighbourhoods, Housing and Public Realm City Policy Committee in November but was withdrawn from the committee on 17th November, due to concerns raised by our client about the validity of the study.

“In order to give the council and our client time to properly consider the correct approach to the feasibility study and our clients’ proposals for development at Summerston, we have been instructed to withdraw the current application and resubmit.”

It continues: “The anticipated net deliverable area in terms of new housing is significantly less than the total site extent and the development incorporates large areas of open space and green network connections.

“The masterplan makes reference to three initial phases with an indicative capacity of approximately 500 units. Whilst the application seeks to establish the principle of development across a wider site, it is expected that only the first three phases would be immediately deliverable.”

The planning statement added: “A range of unit types and sizes will provide choice and variety, appealing to a broad market sector. This site will provide new housing of a range of house types and tenures and will meet the need for new family housing within Glasgow City.

“The masterplan development will create an attractive place for people to live in a safe and well-connected environment, close to local amenities and supporting local schools and facilities. When considered as a whole, the site provides an opportunity to create a sustainable development resulting in a new high-quality residential neighbourhood in Summerston.

“As part of the original masterplan submission, the applicant proposed a community and neighbourhood facility within the site which could have included local shops, a doctors/dentist or community facilities.

“Following feedback from local residents, Caledonian Properties would be prepared to make a financial contribution to the existing facilities within the Bellcraig Community Centre.”