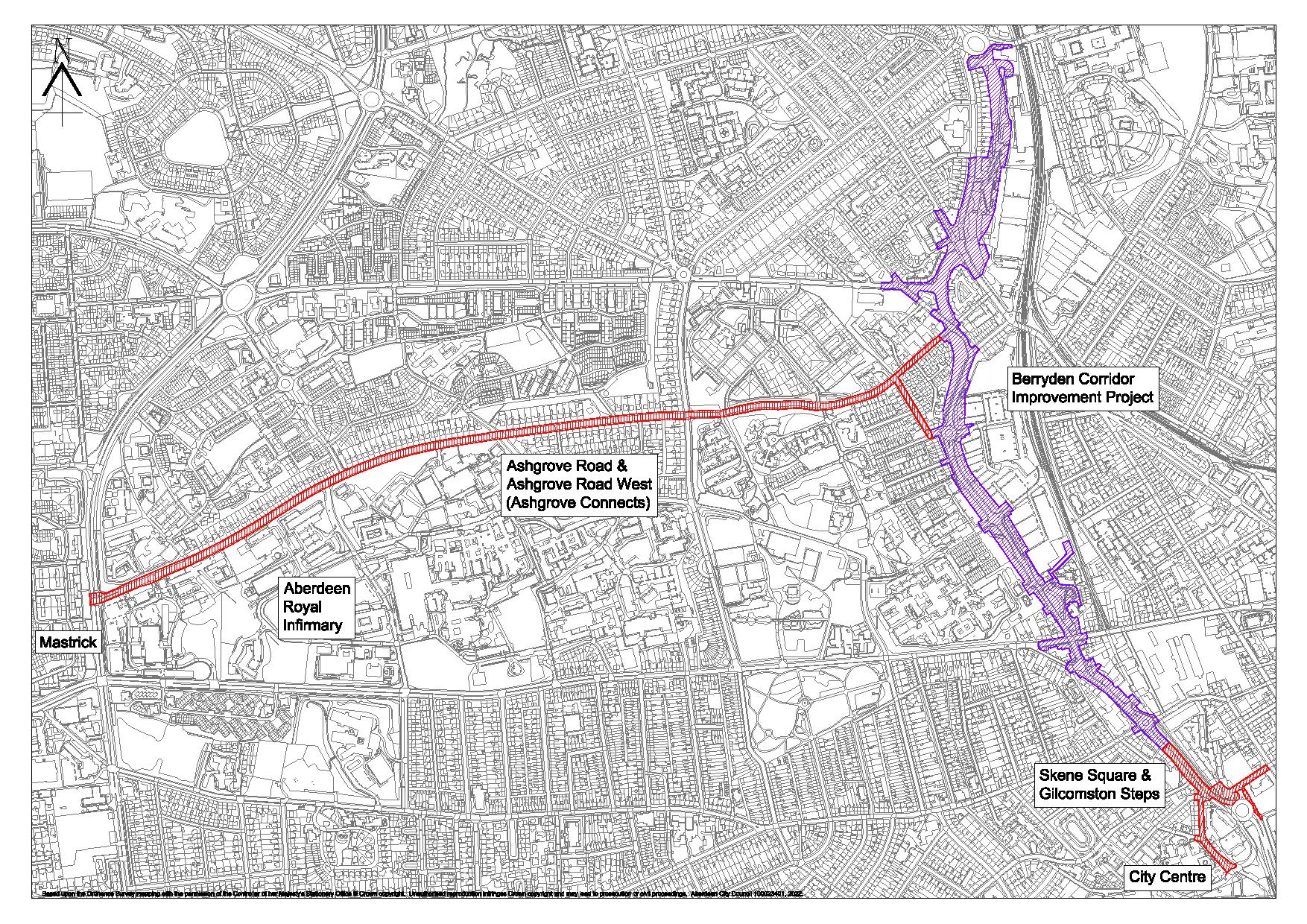 Two projects which will encourage people to walk or cycle more on streets and are designed to connect to and complement the Berryden Corridor Improvement Project were approved by Aberdeen City Council this week.

A business case for the Ashgrove Connects project – for streets west of the Berryden Corridor - and a preferred route for the Skene Square to City Centre project – south of the Corridor - were agreed by members on the City Growth and Resources Committee.

The Ashgrove Connects project has been investigating with the local community what improvements could and should be made to nearby streets and is aimed at enabling people to choose a more active and sustainable lifestyle to make the most of opportunities to complement the proposed infrastructure changes along the Berryden Corridor.

Subject to a successful funding bid, detailed design for the plans will be worked on and the changes to Ashgrove Road and Ashgrove Road West would mean greater priority to people, enhance public space, improve access to shops and facilities, and improve active travel.

For the Skene Square to City Centre project, the committee agreed a preferred option for the route and to progress the development of detailed design at the same time as the work currently being undertaken for the Berryden Corridor.

“The Berryden Corridor and these two schemes will improve the efficiency of the road, cycleway, and pavement network through improving journey time reliability, relieving congestion, and improving infrastructure for walking and cycling.”

Aberdeen City Council co-leader Councillor Ian Yuill said: “These three projects will be a major upgrade to the city’s roads network as Berryden Road and nearby roads operate beyond capacity leading to significant congestion and journey time delays, particularly at peak times.

“We look forward to hearing progress for the Berryden Corridor and these complementary projects in the coming months.”

A report to committee said for the Ashgrove Connects project, the plans include a reduction in speed limit from 30mph to 20mph, reduced carriageway widths, add segregated cycleways, new controlled crossings, an increase in the number of street trees and green infrastructure areas, public realm gateway features, and enhanced bus stop facilities.

For the Skene Square to City Centre project, the report to committee said a high-level route option assessment was undertaken considering possible routes and infrastructure provision. Due to its limited length and proximity, it is recommended that the Spa Street/ Skene Square option is the preferred choice for the northbound route, and Skene Square/Woolmanhill roundabout route is the preferred choice for the southbound route.

The Berryden Corridor Improvement Project involves widening the existing road and junction improvements between Skene Square and Ashgrove Road, and the construction of a new section of road between Ashgrove Road and Kittybrewster roundabout adding more than 1.7miles of additional lane capacity in total. The improved section of road would have traffic light junctions instead of roundabouts, except for the Kittybrewster/St Machar roundabout which will remain.

Once complete, the project will provide more than 10 new pedestrian crossings, about one mile of additional pavements, and more than two miles of new cycle tracks, all aimed at encouraging people to walk and cycle more.

The improved road will build on the benefits gained from the opening of Diamond Bridge, which has about 12,000 vehicles going over it daily, relieving congestion at the Bridge of the Don and the Haudagain roundabout, while further improving connections within the city.