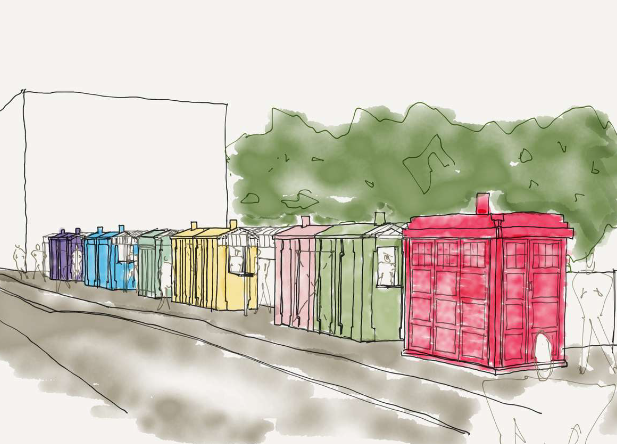 Plans have been submitted for a series of pop-up structures to be sited alongside the existing 1930s Police Box on Leith Walk in Edinburgh.

Cunningham Heavin Architects wishes to add around eight more small pop-up, temporary structures which can be rented for short or longer periods of time by other organisations to create a community hub.

142 police boxes designed by city architect Ebenezer McRae, were originally installed in 1933. Only about 80 remain and their design is unique to Edinburgh These were manufactured by Carron Ironworks in Falkirk. The boxes once had sirens on top and were used by police officers on the beat to phone in to the station with a note of where they were and perhaps get instructions on what they might do next. Each had a sink, a phone, a heater, a small desk on which to fill out forms. And of course, a kettle.

In 2012, twenty-two of the police boxes were put up for sale by Lothian and Borders Police. The Leith Walk Police Box was one of these. It has been deliberately left as it was inside as a local history site of interest.

Outlining the design concept, Cunningham Heavin Architects said the boxes with be “striking, functional, secure, robust, low maintenance structures for a variety of uses from pop-ups to desk space” adding that the structures “can be repeated and adapted easily according to vendors/renter’s needs”.

The proposal will “take reference from national and international precedents in design and architecture to ensure the best possible solution for the proposed project” and the “design will balance appropriate density with good-sized quality structures that are similar in size and complimentary of the pre-existing police box yet functional for different uses”.