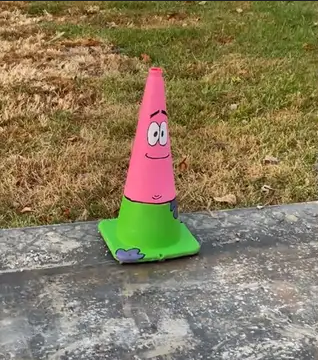 A TikTok video posted by an Ohio construction worker has revealed a perfect SpongeBob prank on his site.

On October 24, TikToker Mikeyp357 went viral after uploading the first video of the saga. At the time of writing, it’s been viewed over 20 million times.

“Showed up to work this morning and someone painted one of our cones like Patrick,” he explained. “I ain’t even mad.”

The very next day, Mikey shared another video where he arrived at work to find a second painted code, this time in the design of SpongeBob SquarePants himself.

“Everyone got their wish, the cone painter has struck again. Patrick now has a buddy, and he don’t look too mad about it either,” he said.

On the night of the second video from Mikey, TikToker Amandacstone went viral with her video showing that she is, in fact, the viral cone painter, Dexerto reports.

She said: “There has been a construction crew working in front of my house for weeks now. I was really bored last night so I [painted the Patrick cone]”

Revealing that she thought it wasn’t enough, she turned the camera to show the before and after photos of the SpongeBob cone.

In a second video, the “Bikini Bottom Mystery Painter” showed the third cone that she painted SpongeBob and Patrick’s friend Sandy on.

Like clockwork, Mikey uploaded a third video showing off the work of art.

With nearly 100 million views between the series of videos, it’s clear that TikTokers absolutely love watching the saga unfold.