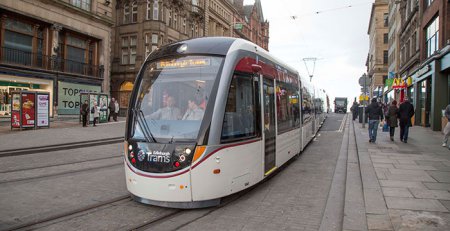 A tram at St Andrews Square

The Edinburgh Tram Inquiry is set to exceed £13 million in costs.

A projection from Transport Scotland indicates that the cost will reach £13,100,812 by the end of this financial year.

The inquiry is looking at why the project finished five years late and totalled £776m, which was twice the planned figure.

The Scottish Government has put aside another £500,000 for the inquiry and Lord Hardie, a former judge, has made it clear that the process will take “as long as is necessary”.

The costs, obtained via a freedom of information request, show that the majority of the £13.1m has been spent on legal fees and staff. Staff costs will reach £6,100,262 by the end of this financial year. Legal fees are expected to rise to £3,076,224.

Edinburgh City Council transport convener Scott Arthur said: “The time taken has undermined the credibility of the inquiry, and the money spent by the SNP Government on this is a source of anger.”

In June, an Edinburgh Tram Inquiry spokesman said: “The inquiry’s evidential database contains over three million documents that have to be carefully considered, which is an extensive, but vital task.

“We continue to make good progress towards producing the report and recommendations, which will be published as soon as practicable.”

A Transport Scotland spokesman said: “We have agreed to continue to fund the costs of the Edinburgh Tram Inquiry until it is completed. Final costs will be published when they become available. This is because, as a statutory inquiry, it is independent of the Scottish government.”