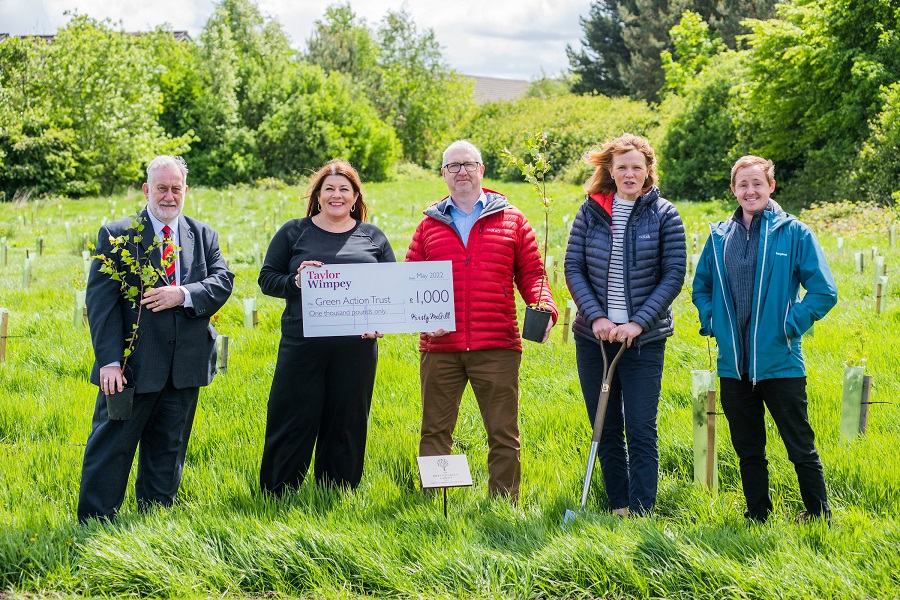 Taylor Wimpey East Scotland has donated £1,000 to support the completion and maintenance of the new urban woodland site planted at Nelson Park in Armadale as part of The Queen’s Green Canopy project to mark The Queen’s Platinum Jubilee.

The donation to West Lothian Council’s delivery partner, Green Action Trust, will support the council’s substantial investment in The Queen’s Green Canopy, a unique tree planting initiative created to mark Her Majesty’s Platinum Jubilee this year which invites people from across the United Kingdom to ‘Plant a Tree for the Jubilee’.

Gillian Barrie, development officer for Green Action Trust who led the team delivering the Nelson Park planting for West Lothian Council, said: “The historical significance of the Queen’s Platinum Jubilee marks a moment in time which our local communities are unlikely to experience again. I would like to thank Taylor Wimpey East Scotland for their generous donation, which will provide for some final planting and future maintenance of this new urban woodland site for the enjoyment of the whole community both now and in the future.”

Taylor Wimpey East Scotland’s land and planning director, Pauline Mills, added: “We are delighted to be able to support Green Action Trust and West Lothian Council’s efforts at Nelson Park, which forms part of The Queen’s Green Canopy. Being able to work with businesses and organisations near our developments both new and historical means a great deal to us, and we are pleased to know that we are making contributions that go directly to making a difference to the lives of people in local communities.”

Executive councillor for the environment, Tom Conn, said: “We are delighted to see the improvements to Nelson Park competed, which will offer benefits to the whole community including improved access and pathways. Creating this new urban woodland site in Armadale also forms part of The Queen’s Green Canopy and we are very proud of the legacy this will create for generations to come.”