Planning permission has been granted for the development of the Dunard Centre, a flagship new 1,000-capacity concert hall in Edinburgh city centre. 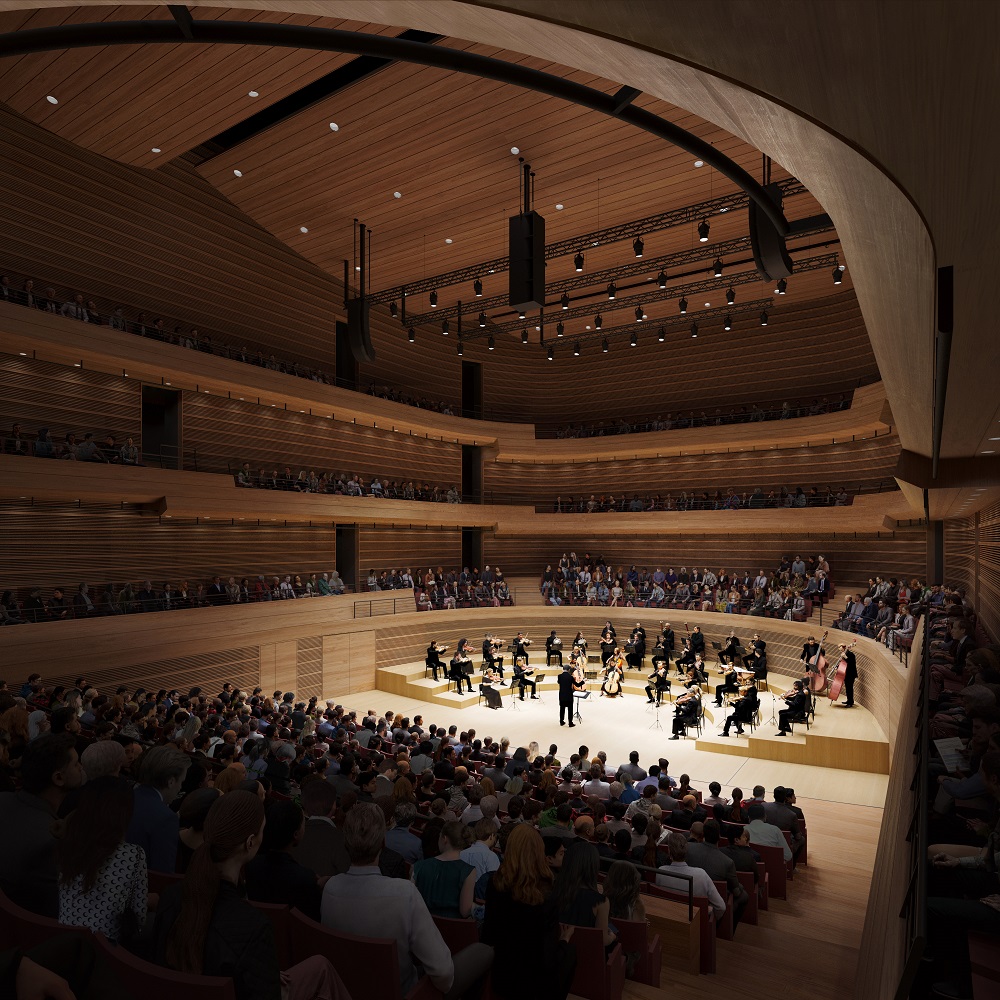 The City of Edinburgh Council has backed the application for what will be the first new concert hall to be built in the city in over 100 years.

Designed by architect Sir David Chipperfield in collaboration with Reiach and Hall Architects and Nagata Acoustics, the Dunard Centre will feature a 1,000 capacity auditorium designed to accommodate a wide range of musical performances. It would also deliver spaces for education and conferencing, a café/bar with indoor and outdoor seating, and a foyer capable of hosting informal performances. It will be home to the Scottish Chamber Orchestra and the National Youth Choir of Scotland.

The Centre is strategically located in the heart of Edinburgh city centre, close to Princes Street and the St James Quarter. The £75 million project is being funded by the Dunard Fund and the Edinburgh and South East Scotland City Region Deal, with a £15 million fundraising campaign currently underway. Construction is set to begin in 2022, with the Dunard Centre opening in 2025. 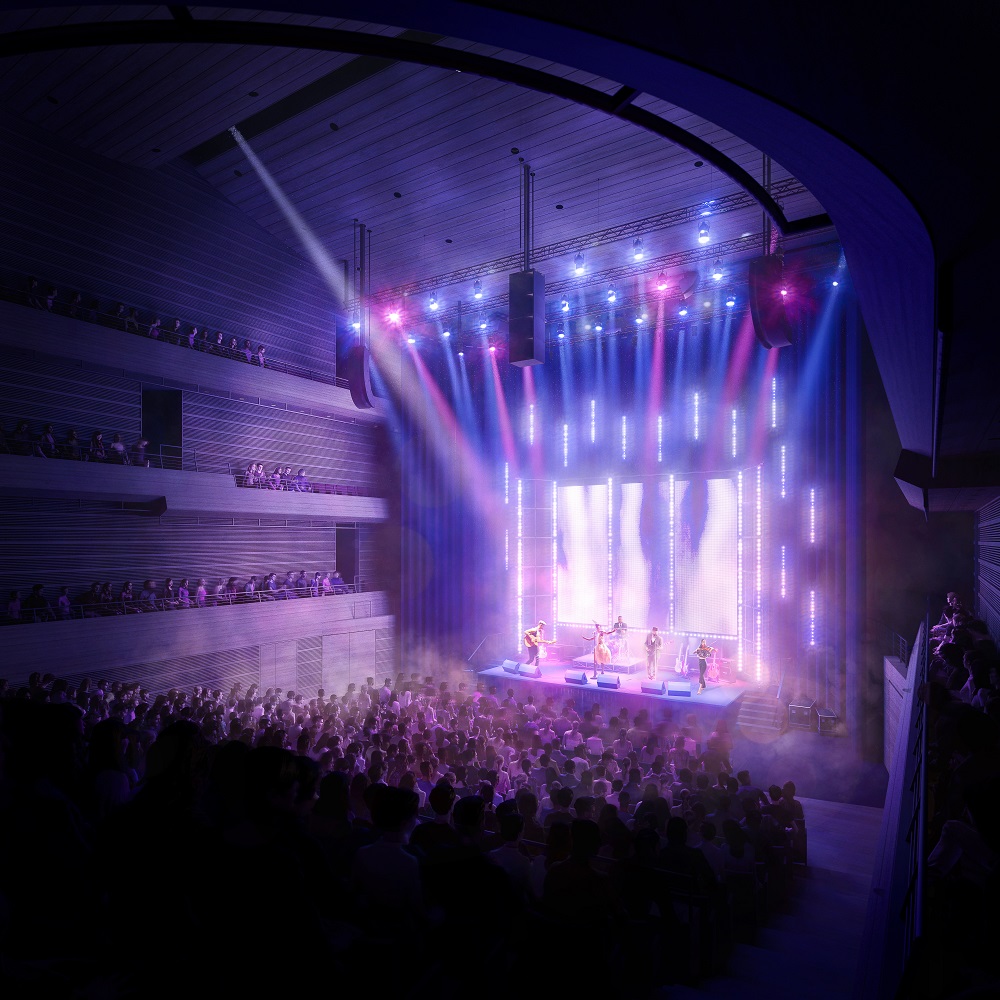 Gavin Reid, chief executive of the Scottish Chamber Orchestra and co-chair at IMPACT Scotland, said the approval is “tremendous news for the city and turns the ambition for a world-class centre for music and performance, into a reality”.

“The Dunard Centre will become the new home of the Scottish Chamber Orchestra and will be transformational,” he added. “A stunning auditorium offering the very best in modern acoustics and boasting state of the art digital broadcast facilities will allow us to dream big, expand our repertoire, collaborate with ever more composers and artists, present our work innovatively, courageously and flexibly all with a new-found sense of adventure and ambition, always seeking to reach more and more people.”

Malcolm Buchanan, chairman of the Royal Bank of Scotland’s Scottish board, said: “The city council’s decision to approve plans for the Dunard Centre is an important milestone for Edinburgh and represents great progress with an exciting project that will enrich the education, music and arts communities in the city and beyond. Royal Bank has almost 300 years of history since our inception in Edinburgh in 1727. The Dunard Centre’s close association with our iconic building at 36 St Andrew Square means this is a project that we are proud to be part of.” 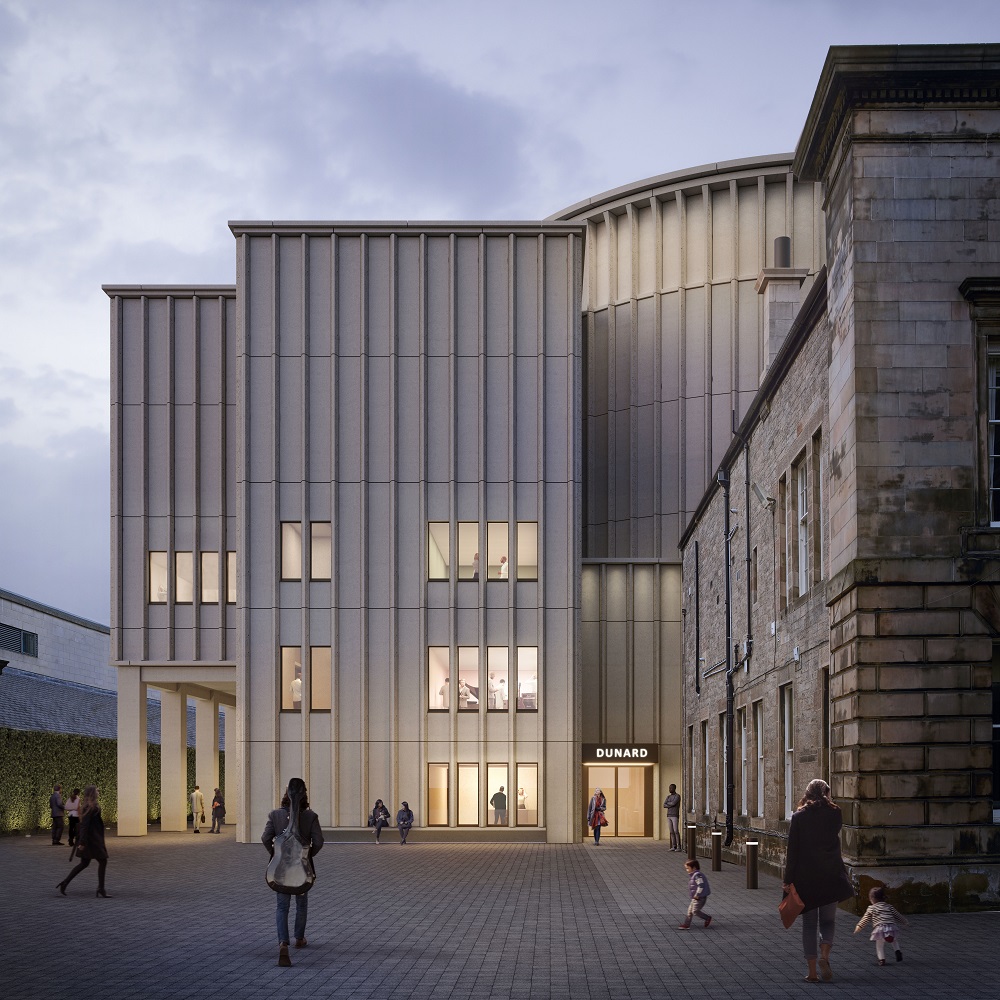 Sir David Chipperfield, principal, David Chipperfield Architects, said: “Throughout the process of developing the design of the Dunard Centre we have embraced both the qualities and the challenges of working with such an extraordinary site. Embedded in the dense area of the Registry Lanes and also on the grand civic axis with Dundas House, the project marks the pivoting point between the New Town and St. James Quarter. Our ambition is to create a building of distinction that is respectful of its complex context while establishing a significant new cultural destination and place in this wonderful city.”

Expert consultant Nagata Acoustics has been working with David Chipperfield Architects on the sleek auditorium design, which will welcome acclaimed UK and international musicians from the worlds of classical, traditional, jazz, pop, world and folk music. Nagata’s previous high-profile projects include the Walt Disney Concert Hall in Los Angeles, the Philharmonie de Paris and Elbphilharmonie in Hamburg, all venues renowned for their rich and immersive sound. David Chipperfield Architects has made its name around the world working on historic renovations and designing contemporary buildings including projects in UNESCO world heritage sites, such as the Neues Museum and James-Simon-Galerie on Berlin’s Museum Island, and the Procuratie Vecchie on St. Mark’s Square in Venice.

The new building will be a place where people can come together to experience incredible performances, with unexpected collaborations and bold programming designed to appeal to audiences of all ages and tastes. The flexible setting will be a home for the Scottish Chamber Orchestra as well as host for other ensembles, choirs, solo musicians and bands. 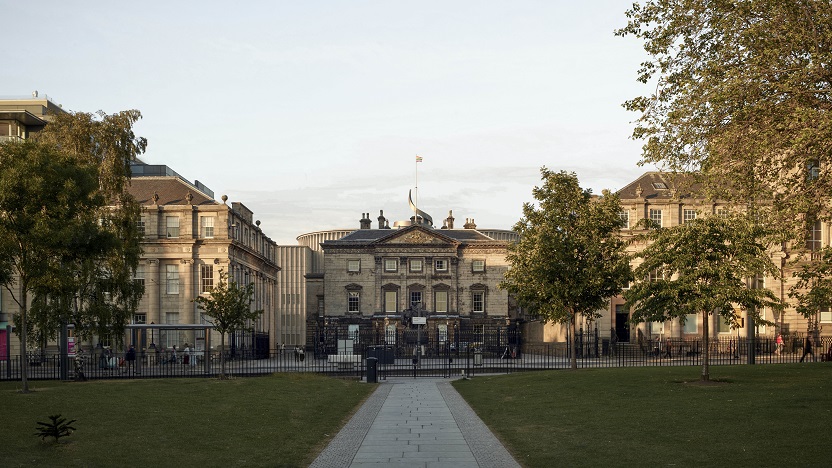 A welcoming café and an all-day events schedule will ensure the Centre’s contribution as a cultural hub and showcase venue, with education and community outreach programmes encouraging participation throughout the region.

The new performance venue is a much-needed investment for Edinburgh which continues to be the world’s festival city. Other cultural destinations in the world are investing heavily in new venue infrastructure, leaving Edinburgh, which has not had a new hall in 100 years, at risk of lagging behind.

Impact Scotland had originally secured planning permission in April 2019 for the venue. However, a judicial review against the project was brought by the developers of the nearby St James Centre who raised concerns that the council had breached rules to protect the World Heritage Site and a strict skyline policy for the city centre in approving the project.

However, the design team in collaboration with Reiach & Hall Architects returned with a space that was “skilfully reimagined to create a world-class auditorium of exceptional acoustic quality in the heart of the city”, retaining the 1000 capacity, while reducing the size of the proposed building. 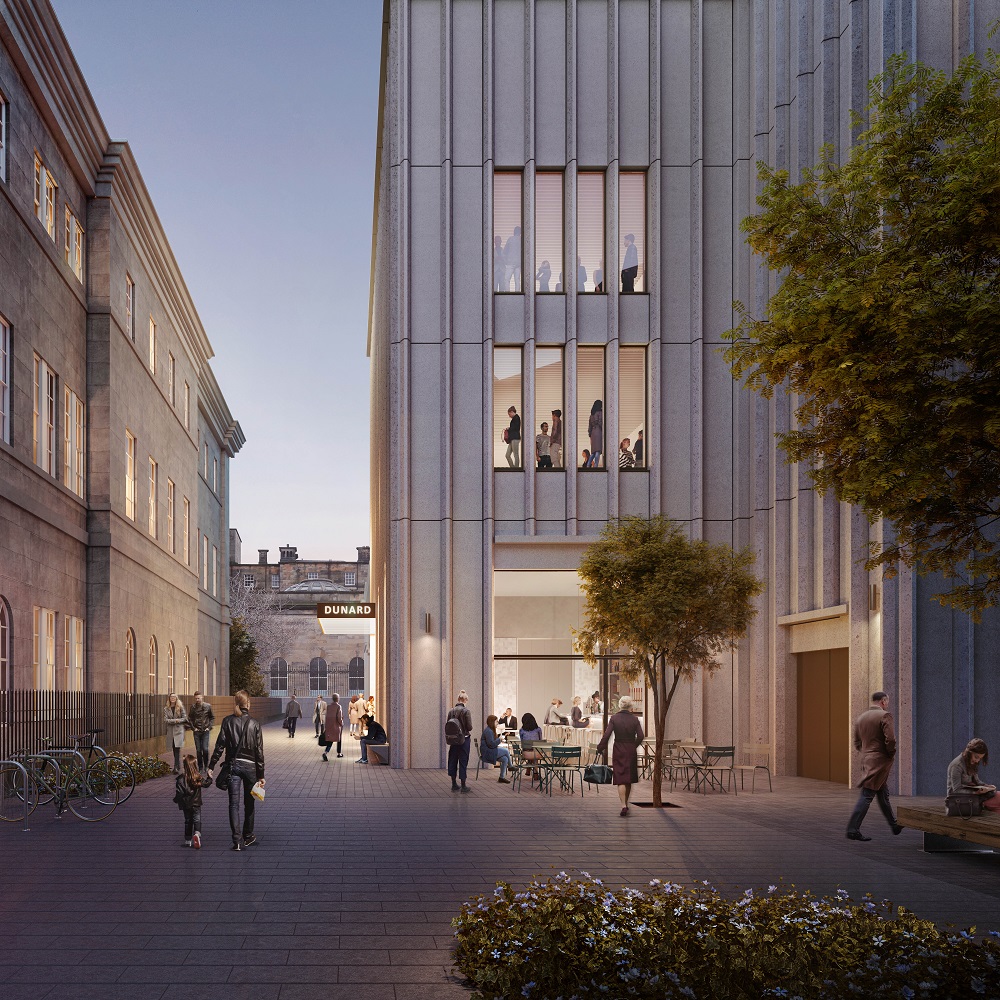 Council leader Adam McVey said: “It’s great news that planning approval has been granted for this exciting and important new cultural venue for our Capital.

“This is the first purpose-built concert venue in Edinburgh in more than 100 years and I know so many people in the city are looking forward to enjoying a first class cultural experience with an expanding number of amazing venues.

“The new concert hall is the cultural flagship of our City Region Deal and being in a central location with fantastic public transport connections, it will complement the wider transformation of the east end of the city centre alongside the newly opened Edinburgh St James Quarter helping to keep our city centre a vibrant and thriving destination.” 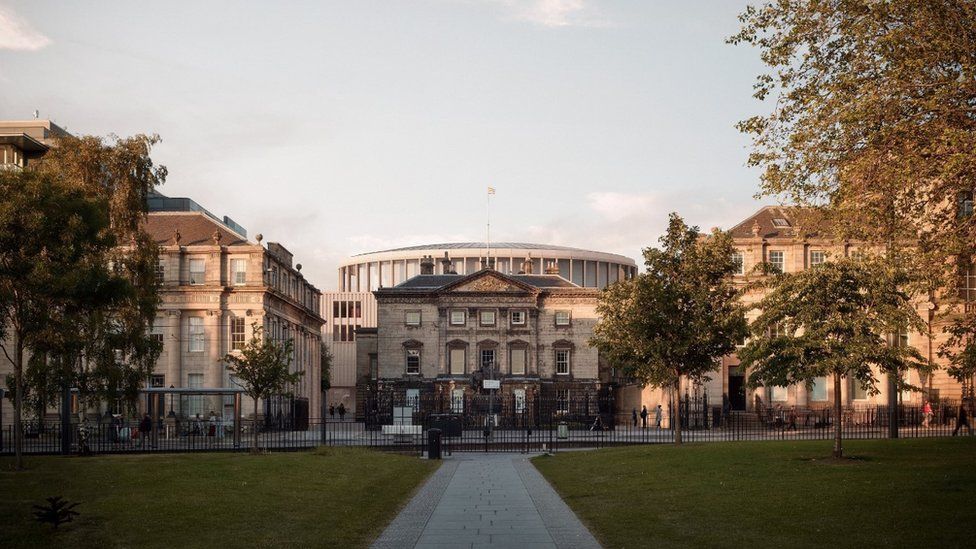 The original design showed how much higher the building would have been behind Dundas House (Image: David Chipperfield Architects/Hayes Davidson)

“The architecture of this new concert hall works well with historic Dundas House: the original plan of the New Town was to have cultural buildings at either end of George Street, which will now be fulfilled at St Andrews Square. Impact who will operate the venue has also committed to reach out to communities and schools across the city to make music accessible which is also welcome.”