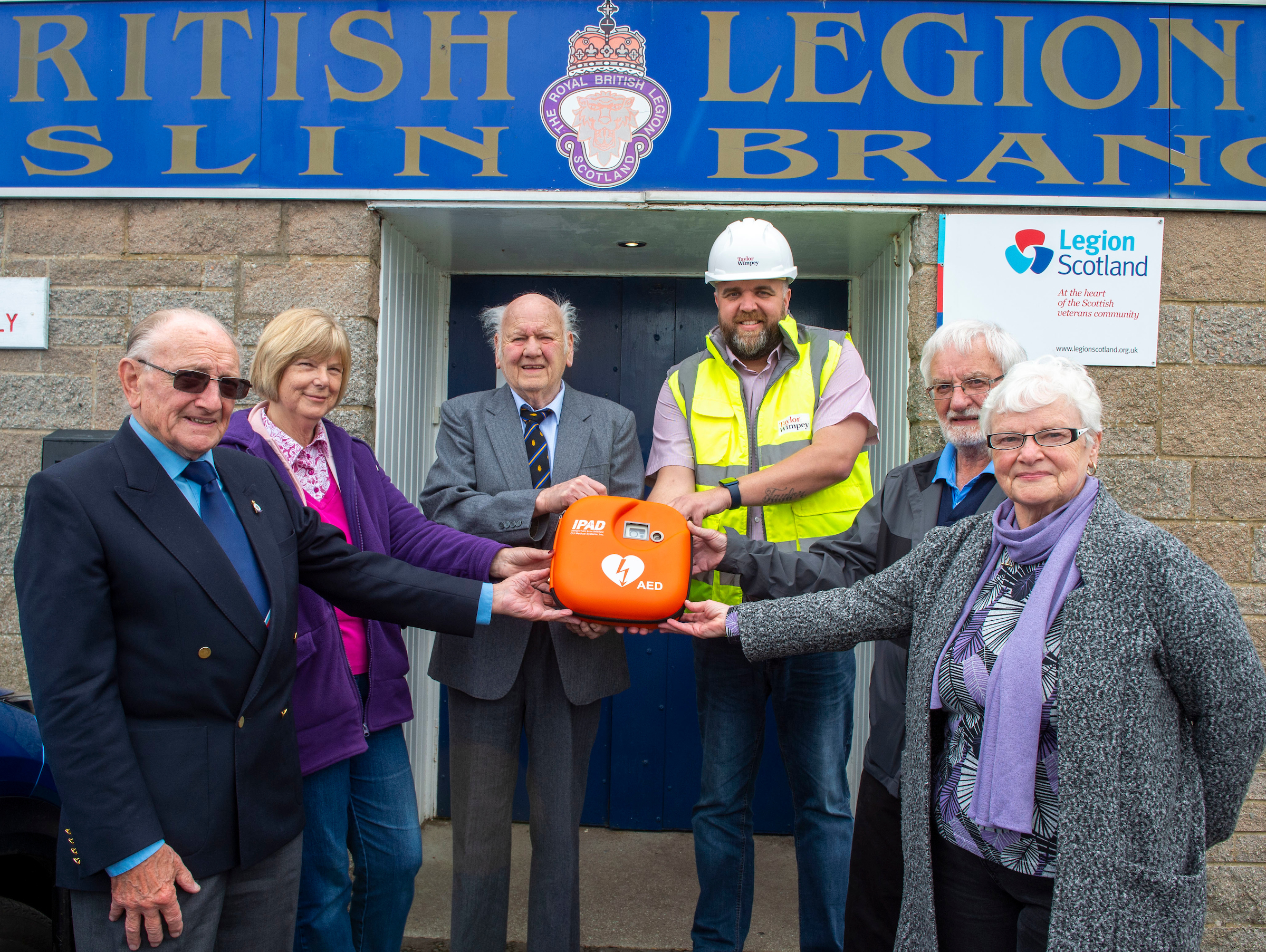 Taylor Wimpey East Scotland has donated a public access defibrillator (PAD) to the Royal British Legion in Roslin to benefit the community in the local area.

As part of a joint initiative with the British Heart Foundation (BHF), the homebuilder is donating potentially life-saving PAD’s to communities around the UK to help people who suffer from an out-of-hospital cardiac arrest.

During 2019, the BHF worked with Taylor Wimpey to train its employees in CPR skills and to provide every one of their building sites in the UK with a defibrillator. As part of its commitment to leaving a lasting legacy in the areas in which it builds, Taylor Wimpey is donating the defibrillators to local communities when their developments are completed.

While work is still ongoing at Sinclair Gardens a spare defibrillator has been made available to the Royal British Legion in Roslin following their request to Taylor Wimpey to help their campaign to have one installed in their club.

Taylor Wimpey has also committed to ensuring all of its defibrillators are registered on The Circuit – the national defibrillator network, which connects defibrillators to NHS ambulance services across the UK, so that in those crucial moments after a cardiac arrest they can be accessed quickly to help save lives.

Deryck Schendel, regional health and safety advisor for Taylor Wimpey in Scotland, said: “It’s so important to us that we give something back to the communities in which we’re building. Our partnership with the BHF is vitally important in helping to ensure that more defibrillators are available for people who might need them and we are proud to be able to make this equipment readily accessible in Roslin.”

Estelle Stephenson, survival programme lead at the British Heart Foundation, said: “More than 30,000 people suffer a cardiac arrest outside of hospital every year but less than one in ten survive. More people could be saved if everyone felt confident performing CPR and using a public access defibrillator.

“We are delighted that Taylor Wimpey has contributed to the aims of the BHF by making a public access defibrillator available in the Royal British Legion hall in Roslin. It could really make the difference between life and death.”

Ian Denholm, chair of the British Legion Roslin branch, said: “We can’t thank Taylor Wimpey and the BHF enough for this defibrillator. While we hope that we don’t have to use it very often, it’s fantastic to know that we can access a defibrillator in the event of an emergency and hopefully help to save someone’s life.”

A defibrillator is a portable device that can be used by anyone to help restart the heart when someone suffers from a cardiac arrest and has stopped breathing. No specific training is needed and the device will only deliver a shock to the heart if necessary. When someone has a cardiac arrest, every second counts. For every minute that passes without defibrillation and CPR the chances of survival decrease by around 10%.